For many people, the term “obsessive-compulsive disorder (OCD)” conjures up images of cleanliness and organization. Maybe you think of hand-washing, organizing things by color and having a spotless house. And while these behaviors may be a part of some people’s experience with OCD, it’s important to remember it’s not every person’s experience. Furthermore, these compulsions are so much more than “quirkiness” and can cause real psychological distress to the person experiencing them.

Because it can be easy to view these habits as “quirks,” how are we supposed to know when certain behaviors are the result of a struggle with OCD? What’s important to remember about OCD is that it’s not just the behaviors themselves, but the thoughts and beliefs behind them that drive the disorder. Many of these compulsions are motivated by fear, which makes them much different than somebody who likes to keep their room clean.

We wanted to know what “red flags” people experienced that let them know their behaviors were more than just a “quirk,” so we asked members of our mental health community to share the moment they realized they had OCD.

1. “I started to repeat things over and over again, and I realized no one else did this. I became attached to a specific number and had to repeat certain things [a] different amount of times. I thought I would be stuck with bad luck if I didn’t complete these rituals.” — Katrina S.

2. “I realized it wasn’t just a ‘quirk’ when I couldn’t touch anything. Especially stair rails. If I did touch them, I had to go immediately and wash my hands or else I’d end up anxious the whole day. Also, [I experienced] violent intrusive thoughts. It was almost impossible for me to get out of my apartment without thinking there would be a big accident, someone would die or I’d be crushed by a truck crossing the street, for example.” — Yaidelise V.

3. “[I realized] when I got a cellphone that counted the characters of each text. I was obsessively editing every text message to meet one of my ‘acceptable numbers.’” — Jenna G.

4. “I would walk to my third period class last year [and] I had to step on very specific tiles on the hallway floor. I’d enter the hallway on my left foot from the same door every day, and then walk 30 tiles, then move over two and walk eight, then move over two and walk six more until I reached my classroom. This was the only time I tolerated even numbers. My teacher (ironically a psychology major), tried getting me to break my habit by standing in the way of my tiles, but every time I messed up, I would freak out and couldn’t focus on anything else until I went back and did it right.” — Sierra K.

5. “My mom made a side comment in regards to my hoarding that made me realize that forming an emotional attachment to a piece of twisted up metal you find on the street, personifying it in your mind and taking it home with you because it was too heartbreaking to just leave it there is: A) Not a thing most people do and B) Is a part of a diagnosis I’d had since childhood. Until then, I’d thought [it] meant needing to fold napkins in a specific fashion after I’d finished with them. Nobody ever talked me through what OCD really means. I’m still finding ‘quirks’ that could be attributed to it, and I’m nearly 30 now.” — Sissi C.

6. “When I was in the fifth grade, I wound up in what I could only call a ‘bed making cycle.’ If my bed wasn’t made before I left home, that morning I was afraid I would have a bad day at school. That’s only where it started. I’m 38 now and it’s so much worse nowadays.” — Stephanie R.

7. “I went with my then girlfriend to a women’s underwear store and while she was trying on a few things, I was awkwardly looking around, feeling totally out of place. Then in between my looking at the ceiling and floor with my hands behind my back, I saw the wall on the far left which was used entirely as a bra rack. They sorted them by band size from left to right but paid no heed to the cup sizes, so it just looked like a mess of bumps. It literally bothered me for the entire day — on the drive home and even in my apartment while the two of us were looking [for] a movie [to watch]. No more than an hour after reaching home we had to drive back as we pretended to shop for bras for 45 minutes while I sorted their entire rack.” — Nicholas A.

8. “To be honest, [I didn’t realize I had OCD] until a few years ago, well into adulthood. I read an article about someone with intrusive thoughts of harm and realized I’d been affected by that since I was a very young child. It was this strange wave of relief because I’d always just thought I was a bad person.” — Jen L.

9. “I didn’t know I had OCD until I was 28. I had to go on a very specific route when shopping in stores. I had a route for Walmart and Target. I realized when I tried to go a different way, I had a full fledged panic attack and had to start back over at the beginning of the store. When I finally got diagnosed, a lot of the stuff my brain does made more sense like the intrusive thoughts of harming myself and the fact that my brain doesn’t stop. I obsess over everything. I started worrying about a fifth grade talent show audition the other night…” — Malorie A.

10. “[I knew] when I couldn’t leave for work because I couldn’t find socks that matched and I knew I was going to be late. My other option was to wear dirty socks. And by matching, I mean the small color logo that is by the ankle has to match, different shades of green won’t cut it. Someone please tell me why they don’t sell all of the socks in the six pack with the same color logo!” — Adah J.

11. “I compulsively cut my hair. I realized it wasn’t a quirk when I wanted to grow my hair out, had a bad day and went to the bathroom and cut spots to the scalp into my hair without paying attention to how bad it looked. I was relieved I felt better that night, but cried the next morning when I saw it. I still do this sometimes. Nothing seems to help with it.” — Brandi S.

12. “I started to get extremely upset, even cry, when some disrupted my routine. And when I couldn’t explain to someone why I did it or had to do it, I just knew I wasn’t going to sleep if I didn’t.” — Courtney B.

13. “I realized there was an issue when I turned back after walking several blocks to check the door, knowing I had checked it at least five to 10 times when I was at the door.” — Maria P.

14. “[I realized] when I had to turn around three times in my car and go up and down the road to make sure I hadn’t hit anyone after I went over a bump. I then cried all the way to work.” — Sarah C.

15. “It wasn’t until I was visiting my psychiatrist on what I thought was just another visit when he asked me about the scabs on my face and hands. After I told him I would pick at my skin until it bled every day for three hours or more, he diagnosed me on the spot and started talking about treatment. I was speechless for the whole day and for a few days after that. It was all just so impacting and unbelievable — I didn’t even know where to begin.” — Frida P.

16. “[I knew] the moment we were trying to help my best friend and give her a space in my room to stay and I had a meltdown because my room was no longer organized… It was the chaos that made me realize my behavior was a little more than a quirk.” — Amber C.

17. “I realized it wasn’t a quirk when [my compulsions] would send me into a panic attack if I didn’t do it or it wasn’t right.” — Lacey U. 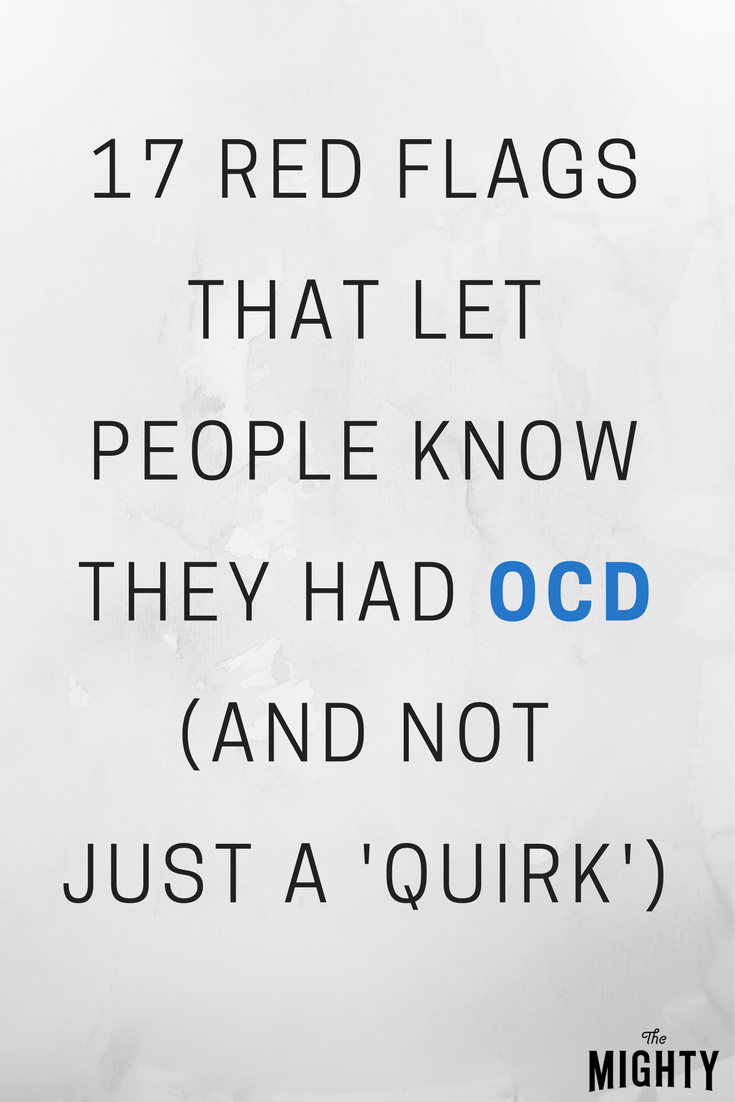