This is the story of parenting lessons learned during a long, grueling, exhausting and exasperating day. On this day, we were up and out of the house early and on our way to the doctor for both kids to undergo allergy testing. Not only did this mean they’d both receive numerous needle pokes and having blood drawn, but it meant we’d be in the car for five-plus hours for the trip there and back. (Yes, we live in the middle of nowhere. It might not even be on the map.) A rough day for anyone, made doubly so by my children’s special needs.

Our daughter has SPD, or sensory processing disorder. Our son has high-functioning autism or Asperger’s syndrome, as well as obsessive-compulsive disorder and severe anxiety. Anything that throws off our routine is the devil to us; needles and long car rides send us spiraling into oblivion.

So I could tell you the whole story of how the day went, but that would take an inordinate amount of time, which none of us have. Instead, I will relay the highlights/lowlights of the day in the form of this countdown. I call it “Top Five Things Parents Should Do When They Don’t Know What to Do.” Enjoy.

If you don’t know how or what this means, I advise you to invest in a yoga DVD or check out a deep breathing technique video on YouTube. Real life example of the merits of this technique: My daughter who has SPD despises car seat buckles. Every time we got into the car yesterday (a total of three or four times), I was forced to buckle a shrieking, kicking, stiff-as-a-board, spitting, purple-in-the-face toddler into her car seat. She spilled our drink from lunch. She threw sour candy all over my husband’s immaculate car. Did I mention how immaculate my husband’s car was?

Cue deep breathing. It took some long, deep breaths to calm myself enough to get her back into that seat. No amount of reasoning was to be had. I tried every trick in my book (as well as several pages borrowed from other mothers and our therapists) to convince her. In the end, it came down to my upper body strength and some long inhales through the nose. We both lived and rode all five-plus hours safely buckled into our seats.

If you’ve ever flown with a small child, the flight attendants tell you to put on your oxygen mask before you put one on your child. It goes against parental nature, but the logic is, you can’t help your child if you die from lack of oxygen in the attempt. Same reasoning applies here. If you’re freaking out, chances are, so will your kid. Calm yourself before you attempt to calm your child. No amount of “calming” words or gestures given by an adult on the edge of a breakdown/meltdown are going to help a child on the edge of the same.

Learn by this example of what not to do: After the initial round of needle pokes, the doctor decided my son (the hypersensitive, sensory-avoiding one) would need additional inter-dermal allergy testing. That meant more needles and bigger needles. When the nurse came in with a tray loaded with eight large syringes, I literally gasped out loud. Bad idea. My son heard that gasp loud and clear and nothing I could say or do was going to make him forget it. Ever heard the term “autistic meltdown?” Insert one here. It took two of us to hold him down so they could finish.

To top that off, they had to re-test one more time for an allergen he was especially allergic to. I was out of the room with my daughter for this one. My son didn’t flinch this time.  He calmly sat in his aunt’s lap and let the nurse insert the needle under his skin without ever making a noise. (Did I mention I brought an entourage to this appointment to help if needed? I did.) Moral of the story: Keep Calm and Parent On. Literally.

3. Take Cues From Your Kids

There are times when the best choice is to just follow the lead set by your child. Example: Our SPD daughter is a sensory seeker with marked under-responsiveness to pain (among many other avoiding/seeking/modulation/regulation issues). When having her blood drawn, the nurse asked me to hold her in my lap to keep her still. My daughter refused. Instead, she sat very still in the chair (alone) while I helped hold her arm straight with one hand. She looked on with mild interest while the nurse took an IV needle and vial to take blood out of her tiny arm. The nurse was shocked she sat so still and quietly. Had I forced her to get into my lap, I absolutely guarantee a meltdown would’ve ensued. In her short three years, she’s developed incredible coping skills. Had I tried to wrestle her into my lap, the full-body contact would have made it impossible for her to center herself and cope with the experience. Instead, all I had to was follow her lead.

2. Surround Yourself With Support

I brought my mom and sister with me yesterday to the appointment. Not just for the kids’ sake, but for my own. We were able to have a nice lunch and enjoy at least part of the day because of their company. When we finally made it home in the evening, my husband was able to help get the kids bathed and settled down for the night, as well as helping unpack the lunch, snacks, and other items that had accumulated in his car (his poor, formerly immaculate car) throughout the day. After dinner, I had a chat with someone whom I consider my closest friend.  We don’t get together nearly as much as we’d like, but this girl is there for me. We have only a couple of “friendship” rules that we both abide by. The first: no judgment; only support. The second: silliness. Always silliness. Which brings me to my next rule…

Laugh hard. Laugh loudly. Laugh often. I have a feeling many people I know think I might not take this whole parenting gig as seriously as I should. There is no other heaviness or seriousness to compare with the thought of being in charge of another human being. Not only in a physical capacity, but also being co-head supervisor of their cognitive, social, emotional and spiritual well-being. It’s the most terrifying responsibility you will ever imagine. Serious? Absolutely. Hilarious? Even more so.

Real life examples: My son was having a huge, major panic attack about those needles. He was melting down and continued to do so even after they were finished and out of the room until my mom had the presence of mind to crack a joke about the pet store having dog underwear. He laughed, and just like that, the world righted itself and the panic was gone.

My beautiful soul of a daughter decided in the car on the way home that her day had, in fact, been too much to handle and she needed a major sensory outlet. Now. Her solution was to take the plastic storage container that had strawberries in it, pull the lid off and proceed to squish every single strawberry into pulp. By the time I glanced in the rearview mirror, there was nothing to be seen but pink paste dripping from my daughter’s clenched hands. I reached for the wet wipes, while realizing I had none. I dug in my bag with one hand while navigating traffic with another (no time to pull over, that pink pulp about to start to flying) and found… an extra pair of my son’s underwear. At this point, my sensory-seeking baby girl was about to get upset because while she loves the initial sensation of mess-making, she also loathes being dirty. Before the screams started in full-force, I executed a one-handed, behind-the-back swipe of her arms and hands, while simultaneously whisking the “mess” in the container away unnoticed and substituting an orally regulating bag of crunchy chips.

Go ahead: Laugh. It was freaking hilarious. It was ridiculous. It was totally necessary. But if I hadn’t started giggling when I saw that strawberry covered fist in the air, I would’ve lost my mind. The day was pressing down hard and my patience and mental state were flagging. That giggle saved our lives. Because when they heard me, the kids started to giggle, too. And then, well… we drove on into the sunset. 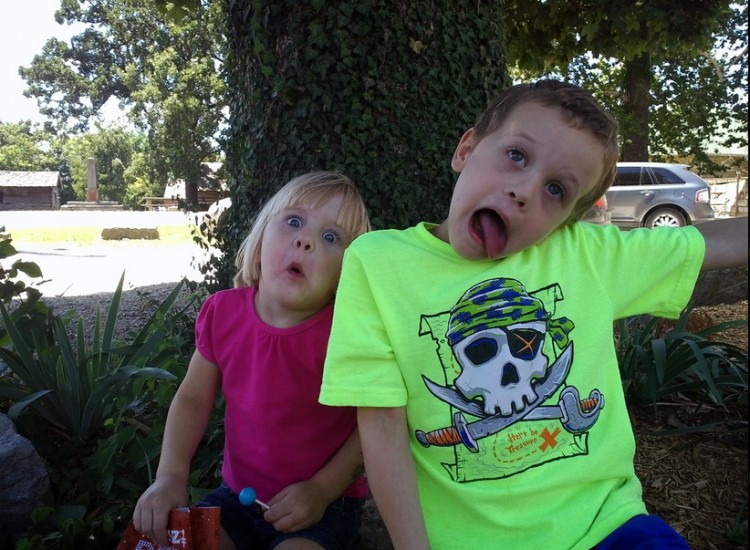 A version of this post originally appeared on Where’s Mommy’s Coffee?

Lauren Cockrell is a stay-at-home autism mom with a background in education. She loves this spectrummy life almost as much she loves her coffee. Her days are spent elbow-deep in sensory bins, when she’s not searching for her misplaced coffee cup.

lauren-cockrell
Want more of The Mighty?
You can find even more stories on our Home page. There, you’ll also find thoughts and questions by our community.
Take Me Home