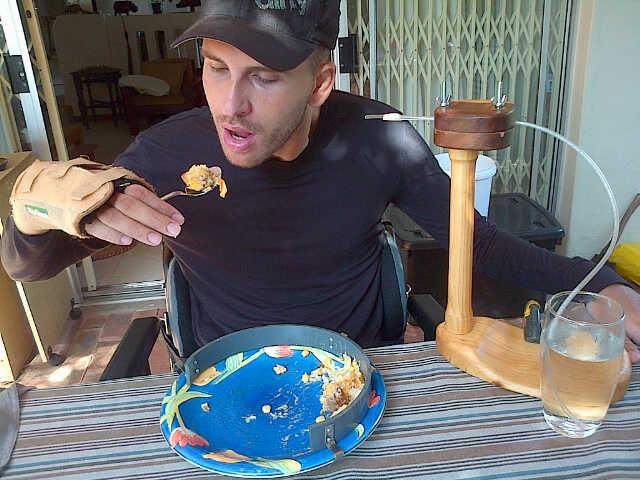 Hi, my name is Uel, and pre-December 2011, I was an avid rock climber, swam in the sea a lot, worked out, organized adventure camps and helped out at church.

But in December 2011, I dived into a river, and well, I didn’t end up winning any medals for my attempt. I unfortunately broke my neck, leaving me paralyzed from the chest down.

I was airlifted to the hospital, where I stayed for 100 days. The doctors didn’t have much hope for me regaining any movement below my shoulders and classified me a quadraplegic.

Two and a half years later, I can now move my arms and my wrists. I have sensation in some of my fingers, and recently my stomach muscles started working… Hey, gotta do some crunches for summer.

Life is obviously more difficult now. I can’t brush my own teeth, I can’t scratch my own shoulder, I can only feed myself certain foods if I’m in a specific position, I can’t hold a glass, I constantly fight with my duvets (and they win) if my arms get tangled, I can’t speak for too long without getting out of breath, as my diaphragm is weaker. I can only swallow food with my head in a certain position, as my throat muscles are stronger on one side (weird, right?), I pee in a bag because I can’t walk to the bathroom, I can’t fight off spiders, I can’t stop myself if I fall over, I can’t brush my hair (because my head’s shaved so I ain’t got any! Ha!). And the list goes on…

I’m 6 foot, two inches, so getting me into a car is super tricky, and we don’t have a wheelchair-friendly car. Because of that, I don’t leave home often, but when I do, after a couple hours my body is tired, and I need a bed. Going out to familiar places and not being able to do familiar things is tough on the soul.

Going out goes well sometimes, but my parents need to carry snacks to feed me regularly so my blood pressure doesn’t drop too much — because then I faint. Oops. I’m not some strange hybrid-Transformer creature with wheels glued to my behind. I’m just a guy sitting down in a wheelchair –for now — so I’m not quite sure why some people stare at me like I have cooties and they may catch it.

Perhaps it’s because we live in a performance-based world. In some countries, if anyone has a disability, they’re left to die as infants or cast out or put in homes or hidden from the public. But I come from a loving family with the most wonderful people in my life, so luckily I’m allowed out into the open and don’t have to live in a bell tower.

In my current condition, when I go out, I’ve noticed four types of people:

1) Those who try to ignore you so hard that it becomes awkward (like people trying so hard not to look at a beggar).

2) Those who stare and gossip.

3) Those who act overly friendly as a type of overcompensation.

4) Those who act normal.

Just to let you all know, #4 is the winner. It boils down to education — not the school/university type of education. People-skills education. Realizing that this is what life dealt some of us. Some are paralyzed, some are born that way, some have an extra chromosome, some catch a disease, some have a chemical imbalance and for some, it was an accident but nobody chose it, so let’s have a little compassion — not pity. And more important, let’s have more love.

I think that all kids/teens (and adults) should be exposed to orphanages, homes for people with disabilities, old-age centers, cancer wards etc. You know what? You may just be surprised at the wonder and beauty you find there. Let’s stop aiming at producing celebrities and pro-athletes* and start aiming at creating caring people.

Many people in the conditions mentioned above don’t have the most love and support because they often get labelled as outcasts. So be a light in their lives and add a little more shine to this world.

*Disclaimer: I don’t have anything against celebrities or pro-athletes, and none of them were harmed in the making of this article.

Uel Maree lives in sunny Cape Town, South Africa. He&#8217;s 30 years old and the youngest of four siblings. He worked in outdoor team-builds and youth camps as well being a youth leader at a local church. In December 2011, however, he broke his neck which left him paralyzed (for now). These days he spends his time writing, reading, toying with the stock market and running a weekly Bible group, all of which keeps him out of trouble.