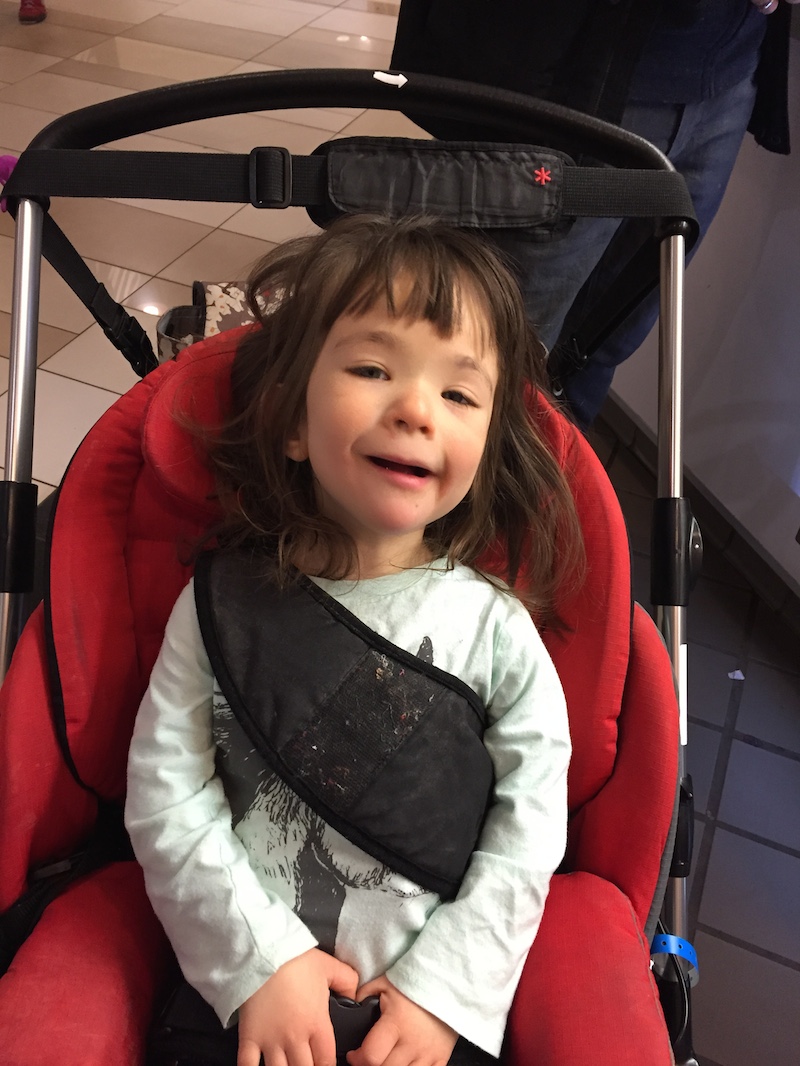 I often find myself struggling with how I set the boundaries of my expectations of others with respect to my daughter Ez. What are appropriate expectations to have of caregivers? Of her doctors? Of her school district? Of her family members? Of the children she meets? Of the strangers who see her out in the world? What are their obligations to her? How do I walk the line between recognizing and accounting for (and expecting others to recognize and account for) the things that make life a bit harder for Ez and expecting her to be embraced as “just another kid,” as a peer, as a member of society who isn’t actually more important than anyone else?

These are not easy questions. But these questions are ones I grapple with constantly. I find myself constantly saying to my husband André or my mom or a friend, “Is that OK? Um, no. Right? Or am I overreacting?” I had one such experience on Tuesday that so clearly fell into the “not OK” category that after walking away from it and explaining what happened to André, I was still so aghast that all I could say was, “Well, at least I know what my next blog post will be about!”

On Tuesday we took Esmé for a trip through Vermont. We had several things in mind to do, but among them was a visit to the Ben and Jerry’s ice cream factory. I’ve always wanted to go. Ez has been showing some interest in eating ice cream by mouth — and Ezzy eating anything is honestly reason enough to go just about anywhere. So we went. I waited in the crazy long line in the ridiculous heat to order super yummy ice cream, while André pushed Ezzy’s red wheelchair around the whole place, stopping to get tickets for the factory tour inside.

So far so good.

When we settled in a shady spot on the patio, we each offered Ezzy tastes of our ice cream over and over. And over and over she pushed them away, crying pitifully with the little bit of chocolate on her trembling lips. So we shifted gears, quickly devouring our rapidly melting ice cream ourselves and moved inside to gather at the designated tour starting time. We waited for approximately 30 seconds before hearing Ez vocalize in the unmistakeable sound that let us know a trip to the bathroom was in order. André and I looked at each other with that “Uh-oh” expression. I thought about her portable potty… in the back of our car down the hill.

“I’ll take her to the bathroom,” I said, “Hopefully she can use the restroom here. If not, we will have to head to the car.” Ez can use a regular toilet, but it isn’t always easy on her or me. So with a hopeful glance back at André she and I and her wheelchair headed to the bathroom line. Any parent in the world would have recognized the look on my face. With a crying, wiggling kid in my arms, too much stuff hanging off her chair, I tried to navigate a just barely accessible bathroom. A handful of kids stood in line ahead of us. A little girl, perhaps 10 or 11 years old, got in line behind us and her mother was directly behind her. By the time Ez and I made it to the front, Ezzy was panicking in my arms. The next bathroom to open up was a regular stall — in which we absolutely would not fit. So I turned to the little girl behind me and said, “You can go ahead, sweetheart,” then nodded toward the accessible stall next to me, I said, “I need to wait for this one.”

The girl walked along to the stall and stepped in. She immediately backed out with a concerned look on her face, and said, “Mom, come here.” An exchange between the two commenced across the bathroom; turns out the stall wasn’t totally clean. While the conversation was going on, I was relieved to hear a flush come from the accessible stall. I started to shift Ezzy’s weight and her chair around so I could get her frustrated flailing little body into the stall quickly.

The mother behind me had still not gone over to her daughter. She instead responded with, “OK, well, you may just need to go into another stall.” And then as the person vacated the accessible stall, the mother stretched her arm in front of me and waved her daughter in before us: “Here, just go in that one.”

I’m going to pause here to discuss this.

Even if she was clueless enough to not see that I was holding a child with a disability and pushing a wheelchair (exactly who this stall was there to serve), and thought instead that Ez was a baby, that was still the only stall with a changing table. It was also the only stall I could fit in. I’d clearly communicated this was what we were waiting for. I’d allowed her to pass in front of me specifically because we needed the accessible stall. Even her daughter seemed to hesitate, looking back at her mom like, “Really, because… um…”

I felt completely invisible, or perhaps it’s fairer to say I felt as if the mother was trying to make us invisible, actively ignoring the needs of others to fill her own needs. I know the look she had, the look of trying to ignore the inconvenience we seemingly pose to the world around us. It’s the partner of the exasperated look she gave me as I tried to maneuver in the small, crowded bathroom. I see it on some drivers’ faces when it takes us a bit longer to walk across the street. Or on some shoppers’ faces when Esmé blocks the way in her gait trainer. I see it when we take up too much space or move too slowly or need a bit of extra attention, when we ask for accommodation. Not every time. Not all the time — but more often than seems right.

And like many things that happen over and over to a person, often the question isn’t so much the single isolated incident of being wronged, or overlooked, or treated as less than, or being made invisible — so much as it is the whole thrust of our reality. It’s the weight of minor infringement after minor infringement — of having to be the one whose job it is to regularly “tell people firmly but nicely not to be a**holes” (as my friend put it earlier this week), because my kid’s needs might otherwise be overlooked in a harsh world. It’s particularly hard for those of us who lack strong voices of our own or whose voices are regularly crowded by the din of “me” and “mine.”

In the end I did not, as the polite self-sacrificing side of me might have liked, shrink back and allow it to happen. I also did not, as the snarky voice in my head did, say, “Of course, I’m so sorry my upset disabled child and I have gotten in the way of you doing whatever you want to do all the time…”

Instead, I turned toward her, my heart racing just a little bit, and said, as I’ve had to say before, “Um, no. Absolutely not.”