We were sitting in a conference room, hearing the results of the evaluation of our 3-year-old daughter. We were dazed. We couldn’t process what they were saying. We’d come for a speech evaluation from the early elementary special education department because we’d been paying for private speech therapy and heard we may qualify for free services. That was all. Just speech.

During the evaluation, the speech therapist had asked if she could bring in a few other people to evaluate my daughter. I said sure, not really understanding what that was all about.

This was the moment. The beginning.

Honestly, we had no idea our daughter had anything more than a speech delay. She was a late walker, but she did walk. Sure, she bumped into things more than the average 3-year-old, but she was mobile. She struggled with puzzles, but she loved to color. Sure, it was mostly scribbles, but she was 3! And yes, we’d noticed the toe walking but didn’t think anything about it. Her speech problem had also been a shock, but we were taking care of that through therapy. We thought she was just a little behind.

This large group of women told us a lot of things that morning. Our daughter was to start at the special education pre-school the following Monday, full time. We’d gone in expecting speech services and left with almost every service you could get.

Near the end of the meeting, the physical therapist gently asked if we’d considered seeing a physician to find out what was going on with our little girl. Obviously, we hadn’t. This was opening a window to a world I’d never known existed. I had no idea where to go or who I would even seek. I didn’t know what kinds of testing we should do.

She recommended starting with a developmental pediatrician, and she had a name and number. Then, the moment of kindness…

This woman, whom I’d barely met, said that if it was OK with me, she’d like to come to the appointment with me. In my daze, I said that was fine.

The appointment day came and, sure enough, the physical therapist was there. She greeted my daughter and me in this brand new world I was still wrapping my head around. My daughter was a handful, into everything, climbing and grabbing. It was very, very distracting, even with the bag of tricks I’d brought with me.

The physical therapist sat with her so I could talk with the doctor and ask questions. I’d peek over at them and they’d be involved in a game. All the while, she had an ear on the doctor and would occasionally interject with a comment or question of her own. She was so calm about the whole thing; it did me a world of good to have her in the room, while I’d gone on autopilot.

When we were leaving the building, my daughter tried to break away from me to run through the parking lot. The physical therapist stopped her and showed me how she likes to hold kids by the wrist when they’re an elopement risk to lessen the chance of the child breaking free. I still use that hold on my daughter, four years later.

We left that day with a plan to begin a series of tests. Those tests eventually led to a diagnosis for my daughter: white matter brain disorder of unknown etymology. In other words, she has one of the white matter disorders that we don’t know enough about to label. It’s an uncertain future, but we’re forging ahead with guns blazing and expectations high.

I know a lot more now and am able to advocate for my daughter successfully. I know where my resources are. But that day, in that conference room, and then in the doctor’s office, I had no idea. And a kind therapist, who we would come to know and love, took her own time to help out a family she’d just met. No one required that she come to that appointment. I would have never expected anyone to do that for us. I didn’t know I needed that.

It may seem like a small thing, what she did. But to me, it was everything. 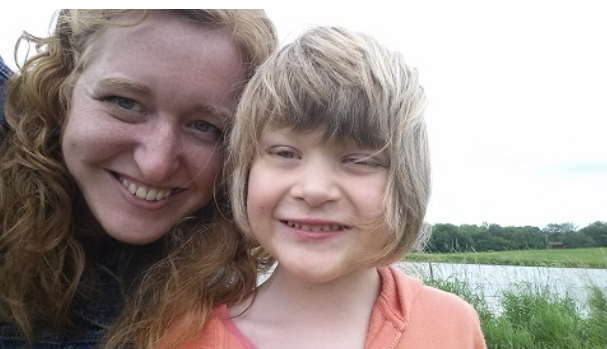