My son spent 131 days in the NICU before he came home. At some point in those first months, when we were still wrapped up in coming to terms with the way our world had been suddenly turned upside down, I went to the grocery store and forgot to take off the “Mom” visitor sticker that was a staple of my wardrobe that summer.

The woman at the register saw it and smiled. She asked if it was from a visit to school. “No,” I said, regretting having left it on and hoping she would leave it at that. But she pressed on. When I told her it was from the NICU, her expression changed to one of pity. “Will he be going home soon?” she asked. No, I told her, we had another surgery scheduled. She grew visibly uncomfortable. “But then after that? He’ll be fine after that?” 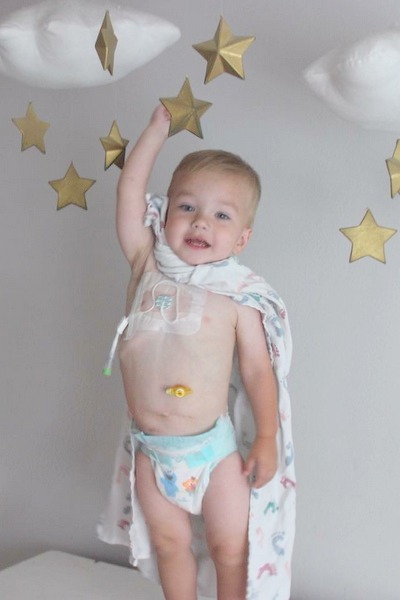 I couldn’t bring myself to voice the fact that I wasn’t even certain my son would survive his next surgery, let alone tell her when he might go home. So, in the darkest stretch of my life, I put on a mask and returned her smile and nodded, protecting a stranger from the world that had become my reality.

It’s a world no one wants to face — a world in which babies sometimes die and not everything can be fixed. And almost without fail, when people bump up against that world for the first time, they want to know when the happy ending will arrive, because they can’t quite bring themselves to look directly at the possibility that there won’t be one.

I can’t really blame people for trying desperately to find the finish line. It took me a long time to realize that a finish line wasn’t what we were seeking. As surgery turned into surgeries and the weeks turned into months, I kept waiting for that shiny ribbon to come into sight so we could dance through it on our way out the hospital doors.

But when we were finally discharged and my son was home, we found that in many ways things got harder. And so my focus shifted to the day we could finally shed his medical equipment. Surely then we would celebrate on the other side of the finish line. But that day came and went, and soon things started to get really difficult again, and the equipment we had worked so hard to wean him from came back.

That’s when I realized that there was no finish line, because we had never been in a race. The route we’d suddenly been diverted to was just a path.

As a society, we fixate so much on the ability to triumph over hardship that we inadvertently silence anything that doesn’t fit that narrative. Even now when I tell someone about my son for the first time, they gravitate toward the same kind of questions — questions designed to propel our story toward that glorious finish. And I see other parents of preemies and medically complex children offering the same kinds of public reassurance I gave that grocery store clerk.

On World Prematurity Day last November, for example, I saw lots of posts about former preemies who are now thriving and absolutely zero mention of former preemies who are still facing challenges. Don’t get me wrong; I’m thrilled to see the amazing things these kids go on to do. It’s given me hope in some of my darkest hours. But something is missing from the public face of that conversation, because for some of these kids “thriving” looks different from what most people might imagine. Many face a long hard road to get to “thriving” that actually intensifies once they leave the hospital. Sometimes there are long, long stretches of “thriving” that are actually more like barely treading water. Not every story ends with a tidy “happily ever after.”

It’s scary to face the thought that not everything is fixable, but it’s unfair to these children and to their families to gloss over the incredible battles they fight — battles they may continue to fight for the rest of their lives, battles they may never win — just so we can take false comfort in the thought of a storybook ending.

My son is an amazing kid. I believe he has a bright future ahead of him. And he will probably never be well, at least not in the traditional sense of the word. Losing most of your guts isn’t exactly something you grow out of. But talking about his health doesn’t require the hushed tones usually reserved for illness and tragedy. Happiness, success, the ability to thrive — these things are not incompatible with continued struggles, and I wish there were more room in our conversations for journeys that don’t end with an unqualified victory. Because sometimes the path is the victory.

Amy Thompson is the mom to Lucas, who started life as a 34-weeker with gastroschisis and is now a fire-truck-obsessed toddler with short bowel syndrome and an affinity for Neil Diamond. She loves dark chocolate, wine, yoga pants and the online friends who have helped her find her voice.