Why Travelers With Disabilities Need to Reclaim Their Voice

Too often, people with disabilities are invisible to us. It’s not that we ignore their existence, but that they’re just not out with us in public. We can’t see what’s not there.

But these people do exist, and in larger numbers than you might believe. In a 2010 report, the United States Census Bureau estimated there are 3.3 million people age 15 and older who must use a wheelchair to get around. Another 10 million Americans use a cane, crutches or walker.

This suggests that in 2010, one in every 23 Americans used a mobility aid to walk (or roll). Did you notice that ratio while you were out at a restaurant? At a baseball game? On vacation? Probably not.

Of the people with disabilities you noticed in public, most were probably not on vacation or far away from home. The world can be a very intimidating place for a person with a disability, and a vacation means traveling to a city or country they do not know. For a person who uses a wheelchair, the idea of traveling beyond one’s hometown might seem impossible.

I’ve always loved to travel, but after a car accident left me using a wheelchair, it seemed like I would never travel again. How could I get a 200-pound wheelchair on a plane? In a taxi? Even down the street in a foreign country? There were so many questions, but so few answers. When I finally did begin traveling again, slightly more than a year after my car accident, I felt both at home and out of place.

Where does a person with a disability go for information on wheelchair accessible travel? Surprisingly, much of the information available on the Internet concerning our niche of the travel world has been written by people who are free of any disability. It is nice that a space has been carved out for us, but can we trust the information we are given? The answer is sometimes, unfortunately, no. 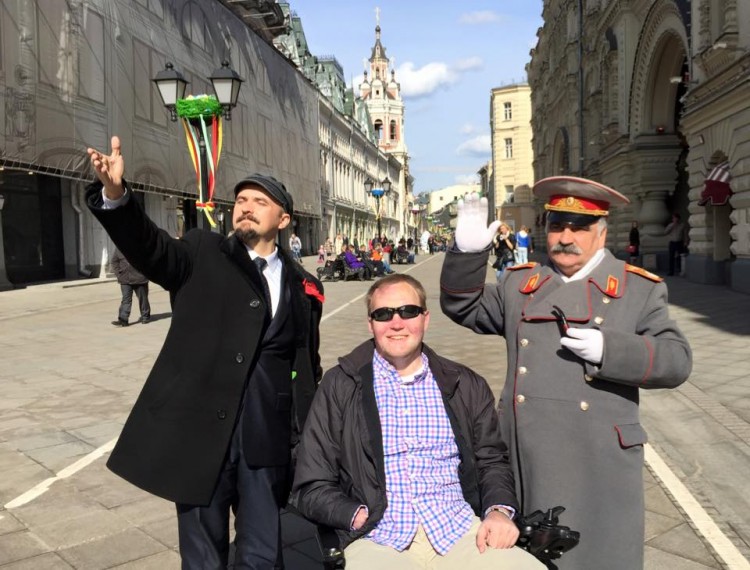 For example, my recent trip to Moscow was a risk. The websites and news articles I had read before provided little hope that I would make it out of the airport. The articles told me that Moscow would be inaccessible, with few, if any, provisions for people in wheelchairs.

One article attacked the public transportation system for being unaccessible, but failed to mention the close to fully accessible city bus system in her attack on the city’s accessibility. It was also clear that since the articles were written, the situation in Moscow has dramatically improved. Curb cuts are now present at the vast majority of intersections. More buildings have been opened up to wheelchair users with ramps or lowered entry thresholds. People with disabilities who have a desire to visit Moscow are more than prepared to overcome the minor challenges that await, and shouldn’t be deterred by inaccurate information online.

As I compared what I saw in Moscow to what was written about it, I realized how important “WheelchairTravel.org“ will be for the disabled community. “WheelchairTravel.org” is a project I started to give travel information to travelers with disabilities. It is a product of my intense love of travel and passionate desire to share the world with others. It seeks to answer the “how” questions I once had, and shows people with disabilities and wheelchair users that traveling with a disability is far from impossible. It is time we have a voice that comes from within. We must reclaim our right to speak for ourselves and offer our own perspectives of traveling.

Together, we can work toward opening the world to a group of people who are too often forgotten. Roll on!

A version of this post originally appeared on WheelchairTravel.org.

Want to make the world a more accessible place for people with disabilities? Like us on Facebook.

John Morris is the globe-trotting Founder of WheelchairTravel.org. He holds a B.S. in history and political science and a M.S. in history from The Florida State University. Following a serious car accident in 2012, he became a triple amputee. His blog helps to open the world of travel for others with disabilities. Having flown more than 300,000 miles since January 2014, he is among the world’s most traveled wheelchair users.

john-morris
Want more of The Mighty?
You can find even more stories on our Home page. There, you’ll also find thoughts and questions by our community.
Take Me Home