Parkinson’s disease is known for symptoms like tremors and stiff muscles, but those aren’t the only physical changes you might notice. Singer Linda Ronstadt recently opened up about what it’s like living a lesser-known symptom you might have experienced as well if you have Parkinson’s disease: challenges with your voice.

In an interview featured on “CBS Sunday Morning” yesterday, Ronstadt said she first noticed she wasn’t able to sing as well as she used to in 2000, though she wasn’t diagnosed with Parkinson’s disease until 2013. She lives with a form of parkinsonism called progressive supranuclear palsy, a degenerative brain disorder that affects your balance, walking, coordination, speech and eye movement and doesn’t respond to Parkinson’s disease medications. She stopped performing in 2009.

Want to get and give support to others in our Parkinson’s community?
Answer this Mighty Member’s question now: 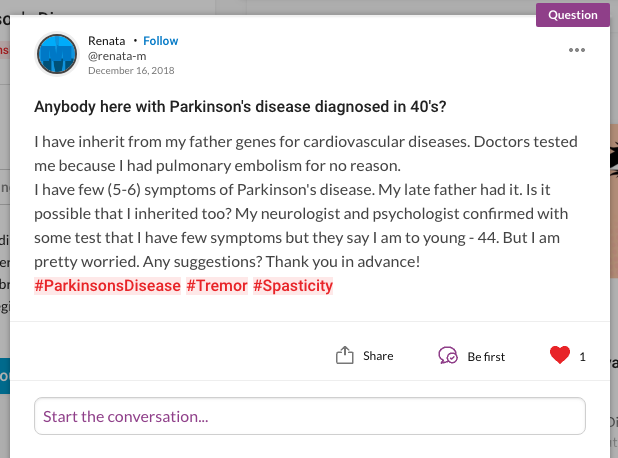 “I’d start to sing and then it would just clamp up. It was, like, a cramp. My voice would freeze,” she said. “And I said, ‘There’s something wrong with my voice.’ And people would say, ‘Oh, you’re just a perfectionist.’ I go, ‘No, there’s really something systemically wrong.’”

Parkinson’s disease is a neurodegenerative disorder that affects movement, including muscles in the face, mouth and throat. Treatments may include therapy with a speech-language pathologist, collagen injections and a treatment called the Lee Silverman Voice Treatment.

She said she can’t spend much time on her feet or sitting up, so she spends much of her time at home in San Francisco. But she said she still sings “in her brain.”

“It’s not quite the same as doing it physically. You know, there’s a physical feeling in singing that’s just like skiing down a hill, except better, ’cause I’m not a very good skier!” she said.

You don’t have to go through Parkinson’s alone. Download the free Mighty app to connect with The Mighty’s supportive community.

Ronstadt also spoke honestly about the fears that often go along with having a chronic illness like Parkinson’s disease, of the uncertainty of what will happen next.

“They say people usually die with Parkinson’s. They don’t always die of it, because it’s so slow-moving, so I figure I’ll die of something. And I’ve watched people die, so I’m not as afraid of dying. I’m afraid of suffering, but I’m not afraid of dying,” she said.

Connect with The Mighty’s Parkinson’s community!

Download the free Mighty app to ask questions and give support.