My odyssey with Parkinson’s disease began at only 14, when a form of Parkinsonism slowly started to affect my ability to move. My life would never be the same. The pains in my ankle signaled an awareness that my body had stopped working and that my health would slowly decline. Over time, that pain in my ankle spread throughout my entire body. Something was twisting all the skeletal muscles within me while my ankle pronated inwards at 80 degrees. Bradykinesia came and made my movements so slow, people much older than me would pass me in the aisles of the grocery store.

High school was marked by baffled doctors, endless medical tests and declining motor functions. That’s when I discovered a passion for chemistry and science, along with a growing desire to find my own diagnosis. Four years passed and I had gone to college under the assumption that I would graduate in a wheelchair, with a drive to do and achieve as much as possible, while able. In October of my freshman year I finally got my diagnosis – Parkinsonism and dystonia. Starting Parkinson’s drugs changed my life. It was like my body was free for the first time in years. My muscles remembered again how to engage properly. The instant I realized this was working became a moment that defined the course of my disease. The hope that something could help me live with my symptoms gave me the inspiration to fight this disease and others — to become a doctor.

Successful treatment lasted for two beautiful years. It wasn’t a cure, but I was living. The medicine and my passion for what I was learning was enough to get me through every day. Over the next two years, my medication had to be doubled, then supplemented with a second class of drugs to stop the fluctuations I had endured — even while taking pills every four hours. Junior year of college began with me feeling on top of the world. I was doing great, excelling academically with two very successful summer research internships behind me. October came, I turned 20 and we celebrated those two years since the diagnosis. All was well until one Sunday of that same month, when I started to feel my arm flailing uncontrollably. 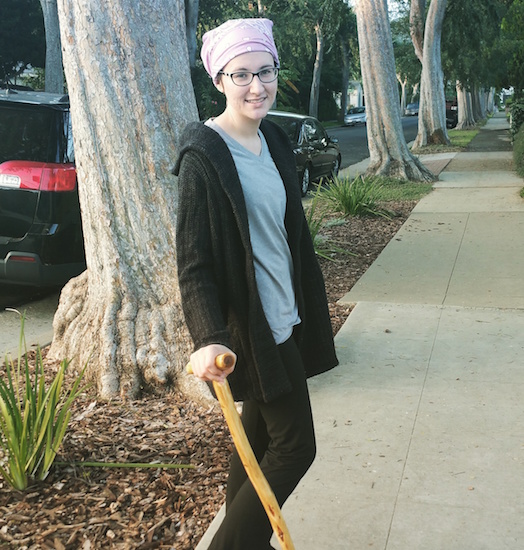 Levodopa-induced dyskinesia. I knew what it meant: the end of my era of successful treatment. Dyskinesia was the symptom that changed my life forever. It began a rapid downward spiral. The next eight months were spent trying every medicine prescribed until there were no more options. Nothing worked. Some days I could not get out of bed, fainting upon standing because my blood pressure and heart rate were becoming erratic. I lost the ability to eat and feared starvation.

On top of the non-motor symptoms, the spasms became so severe that at times I could not move or talk. There was no doubt — things would keep declining unless something drastic happened.

I am one of the lucky ones. I am so fortunate that there exists a surgery that could save me: deep brain stimulation (DBS). On June 1, 2015, I had DBS. During the procedure, an electrode was implanted in my brain while I was awake. They turned on the electricity and knew they targeted the right area when my body began to work again. I felt that moment when the surgical team turned on my electrode and I was suddenly capable of coordinated movement and felt my shoulder’s rigidity relax. I could physically smile again like I had not in so long. I kept saying over and over again, “This is amazing.”

These are the moments that define my trials with Parkinsonism. These moments define who I am, not because I am my disease, but because I live and love life through this all. Every day the effects of this disease remind me of the fear of that first realization and how far I have come. The first time the Parkinson’s drugs started to work, just when all hope seemed to be lost, this medicine came and changed my life. That moment energizes me whenever I am feeling lost, remembering that there is constantly the potential for something wonderful to come and surprise me. When things are going well, I remind myself to be thankful — because I know what it’s like to have everything come crashing down. I don’t take life for granted because of that night when dyskinesia found me. Every day I wake up alive, no matter how bad of a day it is, and I hold dear to that moment when surgery changed my life forever. I smile, why? Because now I can.

My desire to become a physician is intrinsically linked to my experiences with Parkinsonism and dystonia. Every day I am inspired by the people in our community who fight this disease, some of whom look up to me now as a fellow survivor. Throughout the process, they offered me words of encouragement, of hope. It has been such a joy and a blessing to be able to share my experiences, to encourage and support others with the disease and those who pursue DBS. My doctors have shown me the amazing difference good physicians can make in someone’s life.

Jasmine Sturr is a senior chemistry major at the University of Redlands and an applicant for admission to medical school to start in the fall of 2016. She may have parkinsonism and dystonia, but it doesn&#8217;t have her.

jasmine-sturr
Want more of The Mighty?
You can find even more stories on our Home page. There, you’ll also find thoughts and questions by our community.
Take Me Home