“And now, you fight.” These were the first words spoken to us by our son’s diagnosing developmental psychologist when he received a diagnosis of autism in October of 2017. A diagnosis the same developmental clinic had told us he was not a candidate for 18 months earlier. A diagnosis that explained enough for now. A diagnosis that was supposed to open doors for his medical servicing while we continued testing to figure out what was really going on.

Why do we tax the parents and families of children with disabilities?

Why do we make them fight?

Having your child receive a medical diagnosis – any medical diagnosis– is traumatic. And you’ve likely already climbed up an uphill battle to get there. It’s emotionally draining. It can be exhausting, having to explain and then answer questions that you as the parent don’t necessarily have the answer to. Answers you don’t want to know. Don’t want to remember, or will never know.

It’s time to hurry up and wait.

Waitlists. Forms. Packets of information. The same questions asked over and over again with ever so slightly different language. All for the same end goal, but there is seemingly no coordination between them.

Everyone in education and medicine is overworked. No one has enough time. Every child needs better coverage, more comprehensive treatment, more coordinate care.

And there’s the unspoken cost of a diagnosis. The time invested in caring for your child. The time at doctor’s appointments. The time it takes to schedule those appointments, the time spent in waiting rooms. The time filling out forms. The co-pays, the deductibles, and the sleepless nights.

It took our family six years and three months to receive a diagnosis. Our narrative is not novel.

Why is every step a fight?

Why does society put so much strain on us? Every time we have to fill out a form and tell a new provider/system/agency how much our child doesn’t know. Can’t do. Can’t demonstrate. Pay for a test he can’t score on – one medical professionals can’t even interpret themselves. How many times do we have to be asked to reiterate his deficits? How is this helpful? Why not assess what he can do? For me, I feel traumatized all over again each time we need to fill these forms out. And as he gets older, the questions grow in complexity while they become less relevant to our son. The constant evolving reminders of what he can’t or might never do is not helpful to him, his providers, nor our family. It’s a time suck. And it hurts. We need to stop focusing on the “can’ts.”

If you need support, join our #checkinwithme community: 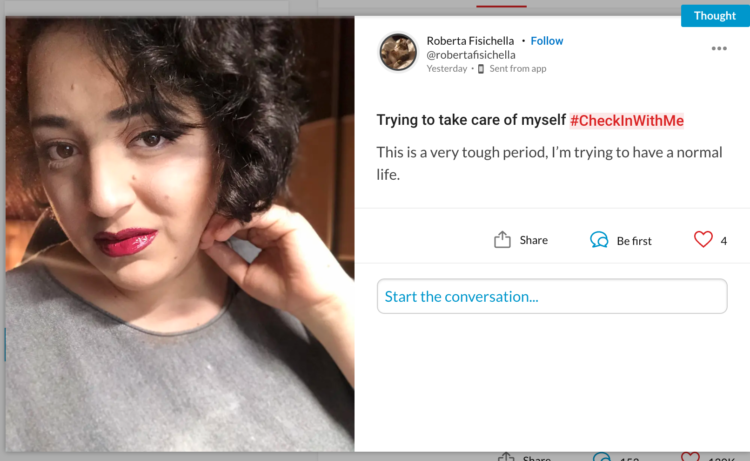 The assumption that children with disabilities have a built-in special network of supports is a grossly mistaken narrative. There is no fantasy land of providers reaching out their hands and their hearts to service your child.

Indeed, we have met some of the best in the country along our journey. We’ve had doctors call us from their personal cell phones on a weekend, during the evening, with test results, updates or just to check in. We’ve met doctors who gave us their time, their attention, and their hearts. At the same time, we’ve also met doctors who have left us to feel hopeless, disenfranchised and alone. We have had doctors tell us to “control our child” so they can run tests. Tests he won’t score on anyway. We’ve had doctors tell us to seek a second opinion if we don’t like theirs.

We’re glad we did.

Our son has Phelan-McDermid syndrome. His 22q13 genetic mutation underscores his inability to develop and thrive typically. He is one of an estimated 1,950 people in the world with this diagnosis. Among the science that is known, the prognosis given indicates he will experience significant and chronic regression in skills – a rate that will accelerate between the ages of 4 and 6.

He received his diagnosis when he was 6 years and 3 months old. We have been on waitlists for in- home ABA services for 13 months. We had been waiting for the Department of Disability Services (DDS) to confirm his eligibility for services for 12 months.

We were referred to the augmented communication systems department to give us clinical assessment of his needs and guidance for his school services and at home provisions to enable our son to communicate his needs– to be fitted with a voice.

Two weeks after being referred we received the phone call in October of last year. They explained the process. They would be sending us a packet to fill out about our son and then upon receipt of it they would call us back and schedule his appt. They are currently booking out into May of this year. Why does our son have to wait the entire year of kindergarten to get guidance on what voice would work best for his needs?

When we get this information it won’t just happen overnight either. He won’t be presented with a magical voice box and we’ll be on our way. We’ll have to agree upon a pathway with the clinician. We’ll have to get insurance and DDS approvals. We’ll have to wait for the technology to be manufactured for him.

Maybe by first grade our son will have a voice.

At what point do all the parents who are struggling with managing the demands say, “Enough is enough. We won’t wait anymore! We won’t accept these timelines!” When will society fund more doctors? When will changes in our education system channel more human service professionals to meet the growing demands of children and their families?

When we will stop telling families to wait? When will we stop weighing down their hopes, their patience and their pride?

And it’s a money issue. No one wants to pay. No one wants to be responsible. The reality is that the costs of children who have disabilities get more expensive over time– hence the argument for intervention early and often. If we invest in children while they are young, it costs society less when they are older. So why are we making children wait for services and intervention during these sensitive periods of development? Why are we forcing families to wait it out and fight their school systems for more help? Why is this the norm we’ve come to expect?

I can tell you why the parents of children with disabilities put up with it all. Because they have no time for that fight. After the doctor’s visits, therapies, medication refills, insurance referrals, conversations with providers and navigating the evolving needs of their beautiful child, they might also have to tend to other children who deserve their attention, or spouses and families. They might also have careers with their own set of demands. They have dreams of experiences outside of therapy visits and phone calls to fight for. They have interests in conversations about more than what their child can’t do. They have interests. Period. They have feelings. They have weaknesses. They have unmet needs too.

For all the parents, caregivers, families and children in the fight, know you are not alone. And your fight isn’t your own –it’s all of ours and we are in this together. Because our children deserve the world and we won’t stop until we build it for them. And so together, we fight.

Christina Cipriano, Ph.D., is an Applied Developmental and Educational Psychologist and Director of Research at the Yale Center for Emotional Intelligence. She is the proud parent of four beautiful children who motivate her daily to take the moon and make it shine for everyone. You can read more about her experiences and science at www.drchriscip.com

christina-cipriano
Want more of The Mighty?
You can find even more stories on our Home page. There, you’ll also find thoughts and questions by our community.
Take Me Home