My Photo Went Viral on Facebook for the Wrong Reason

My name is Crystal. I love to travel the world, capturing beautiful moments with my camera, pen and journal in hand. I’m a baker (creme brûlée will be my next challenge!), a Jamba Juice addict and future American Sign Language Interpreter.

I’m someone who has experienced tremendous joys, but also gut-wrenching sorrows. I am more than the mark on my skin.

In the past I’ve been told by (adult) strangers that I must have skin cancer, that there is something wrong with me and that it’s not really a birthmark. Strangers have persisted that I should have surgery to “fix” my face, even after I tried to educate them by explaining that it’s not that simple — and I’m happy with who I am, how I am. Others have told me that I must be courageous, for if they were me, they’d never even leave their house. 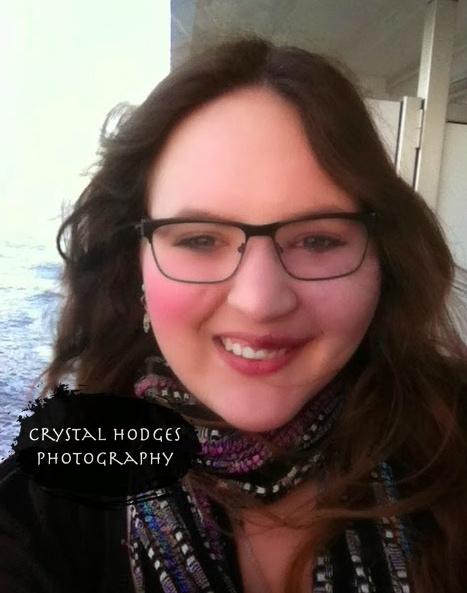 Just like millions of other people, I have a birthmark. Mine just happens to be on my face. The birthmark I have is called a port-wine stain. Three of every 1,000 people have this kind of birthmark and they are most commonly found on the face and neck.

Instead of being the typical skin-deep birthmark, mine goes all the way to my brain because it is caused by extra blood vessels. My left upper lip is also affected in color and size, as well as my left cheek… even my bone structure is different on the side with the birthmark! (But it’s kind of cool… It’s similar to a mood ring, as it changes colors with the temperatures of the day. People always known I’m cold before I even say a word!)

Due to the extra blood vessels, I have extra blood pressure in my eye, which causes a disease called glaucoma. From the age of 8, I’ve had to live with and accept fact that my left eye could possibly go blind one day in my distant future. Every few years I also have to have MRIs to make sure that none of the extra blood vessels have expanded to cause any damage to my brain.

About every two to three months I also have laser treatments on my birthmark. During this time, my face is a darker color than usual. Without the treatments, the blood vessels can grow, causing my skin to harden, become a pebble-stone-like texture, and bleed at random whenever it wants. But no matter how many treatments I have and even if my birthmark becomes undetectable to the naked eye, I will always have my birthmark. My cheek will always look swollen and my features asymmetrical.

Back in 2014, a group on Facebook with nearly 27 million followers used a photo of mine without my knowledge or consent — a photo that I took 20 minutes after a painful laser treatment. They added text to the photo, “1 Like = Beautiful,” as well as their personal logo. My name and permission were not included in this process, nor was my story or a link to my blog or website.

I didn’t know about this until a few months later, after arriving home from a math class. A friend sent me the link saying they saw my face in someone else’s newsfeed and the photo already had over 14,000 likes within the first eight hours of it being posted.

From my research, at least five total Facebook groups have used my image, causing it to go viral at least 16 times to over 30 million strangers around the world. One share alone has 256,000-plus “likes” and thousands of comments.

I don’t mind my story getting out there; I blog about my facial difference on a regular basis. But what I don’t want is my photo to go viral without the story being told. I want people to know my story — but not with the purpose of gaining sympathy. I want my story to be known in attempts of educating other people, and in hopes of motivating a cultural change in how “different” people are treated.

A part of me feels some of the “likes” are probably genuine in their thoughts of my beauty. But a part of me also feels as though they’re sympathy likes… and I’ve never been one who needs pity. 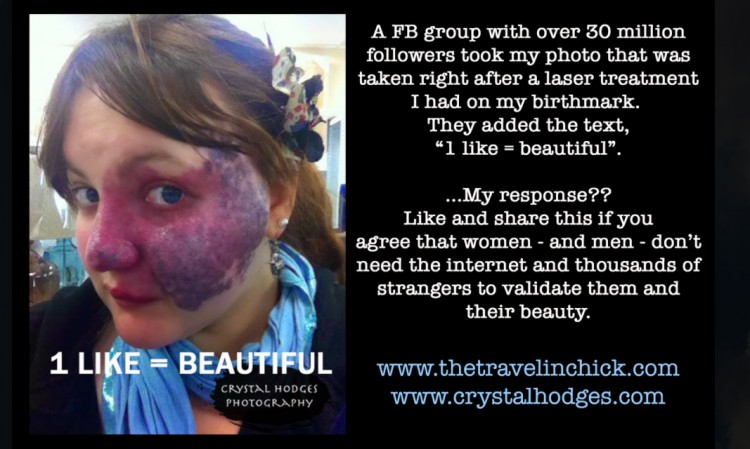 I don’t need 30 million strangers to validate who I am or my beauty. Just because I have a facial difference doesn’t automatically mean I lack confidence or think I’m “ugly.” In fact, while I’ve had my up-and-down days, that’s never been a big struggle of mine.

I have spent hours reading thousands of the comments that were made and the countless shares that were made. The majority of the comments have been surprisingly positive while others made me laugh because I knew I couldn’t take them too seriously. They’ve ranged from people telling me that they wished they were purple as well, and there was one who wrote a post asking God to remove the “evil” from my face. Some stated that they are glad that we don’t get into heaven by looks alone. They’ve also said my birthmark will fade with age (it won’t) or a doctor can help me. But many have said I’m beautiful, they’re jealous of my unique color scheme and that it’s the inside that counts.

One positive part of this whole crazy experience? My dating pool has probably grown from a small fishbowl to an ocean full of fish.

My worth, beauty and value are so much deeper than what happens in the digital world. We’re all different in our own ways — whether our differences are visible or not. But more than that? We’re all beautiful and special in our own ways. We are more than the pixels that people see on their screens, and we can’t allow others to make us believe otherwise. 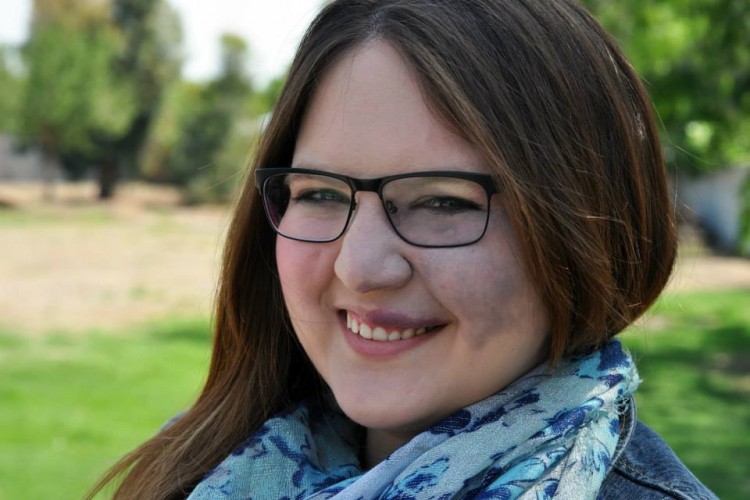 A longer version of this post originally appeared on Life at Random in August 2014.

The Mighty is asking its readers the following: Describe a time you saw your disability, illness and/or disease through the eyes of someone else. If you’d like to participate, please send a blog post to community@themighty.com. Please include a photo for the piece, a photo of yourself and 1-2 sentence bio.

A real person who was turned into a meme, which became a viral sensation online. Speaker. Author. Anti-bullying advocate. God-sized dreamer.