A Defense of Trigger Warnings, From Someone With PTSD

I am one of those hopelessly naïve people who tries to reason with people on the Internet. Logically, I know these discussions only make people dig their feet in further. Providing peer-reviewed research is not going to convince some dude-bro on the web that the wage gap does exist, no matter what that meme he saw last week told him. I rationalize it by thinking that maybe my comments will reassure others who either sympathize with me or are on the fence. So, I fight the good fight, no matter how useless it really is. People say awful things to me, but I have thick skin. I generally feel rude comments reflect poorly on the commenter.

This made it all-the-more startling when someone pulled out this doozie in an online debate with me a couple weeks ago, and it actually made me upset. I had commented on a video that claimed to “DESTROY FEMINISM,” saying I could easily dismantle the argument if the original poster (OP) was willing to engage with me. Instead of responding, he posted this meme, which a quick Google search will tell you depicts Melody Hensley, a victim of cyber-bullying, and a person with post-traumatic stress disorder (PTSD). Under the photo of Hensley is the word “triggered.” It’s meant to be ironic, of course, because many people don’t believe Hensley has a real reason to be traumatized. The meme is often used now to delegitimize another person’s argument by saying they are simply too easily offended. 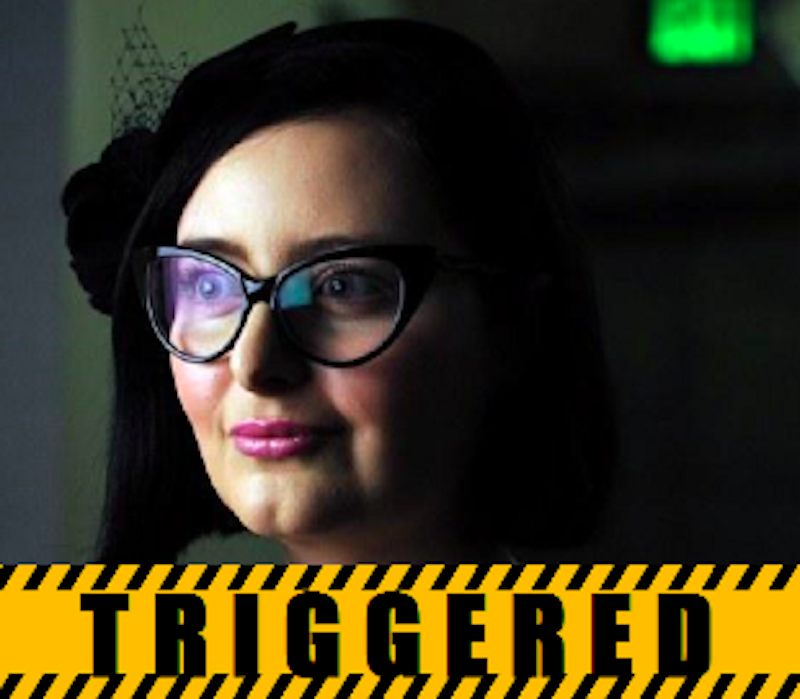 I am a loud mouth. I always have a lot to say, an opinion to give. But seeing this meme temporarily made me speechless. First of all, it was illogical. I was not hysterical or even visibly upset. I hadn’t even told the OP my issue with the video. But I felt this meme served the purpose of shutting down my argument before I had even given it by making fun of mental illness.

After several minutes of staring at my computer, I decided to bench the feminist in me for a second and instead speak from another not totally separate part of me, the part that suffers from PTSD. Three years ago, I had a traumatic experience, the kind of thing I thought only existed in melodramatic crime shows. I have been struggling to cope with the incident ever since, undergoing thousands of dollars’ worth of psychotherapy and seeking just the right balance of medications. The first emotion I experienced when I heard those words come out of my psychiatrist’s mouth was embarrassment. The incident had not directly threatened me. So why was I so upset? I thought of rape victims, of veterans, people I believe have a “true” right to their suffering. I felt silly and fragile for having an extreme reaction to an event that did me no physical harm.

And yet, I had been harmed. Just two days ago, I was triggered by an episode of a travel show. A scene depicted an animal sacrifice, and the unexpected violence made me inconsolable for the better part of an hour. This is why I am an avid defender of trigger warnings

Some people feel like trigger warnings coddle sensitive people. I don’t see it that way. I see trigger warnings as a common courtesy to help prevent sufferers of PTSD, like me, from reliving our trauma. I recognize it is not fail-proof, and getting upset by our memories is a part of life. But what is so wrong with making an effort?

It took me a while, but eventually I realized that feeling like it was shameful for me to be suffering was the result of living in a society that correlates mental illness with weakness. This meme fails to recognize that everyone copes with pain differently. We all have struggles. But we should not compare our pain to others’ or silence those who speak openly about their anguish. Instead, we should recognize that to survive, we have to share the pain and help each other through it.

The Mighty is asking its readers the following: Describe the moment someone changed the way you think about disability, disease or mental illness. If you’d like to participate, please send a blog post to community@themighty.com. Please include a photo for the piece, a photo of yourself and 1-2 sentence bio. Check out our Submit a Story page for more about our submission guidelines.

An Indiana native, Molly Miller got her Bachelor&#8217;s in English Education from Purdue University. She is now an MFA candidate at Southern Connecticut State University, where she is writing a memoir about her experiences with mental illness. Molly resides in New Haven with her boyfriend, two cats, a rabbit, and one very tolerant roommate.

molly-miller
Want more of The Mighty?
You can find even more stories on our Home page. There, you’ll also find thoughts and questions by our community.
Take Me Home