How I Overcame My Self-Consciousness About Using a Mobility Aid

I’ve had POTS for over three years now and for over three years it’s been winning. And when I say winning, I mean really winning. It’s stopped me going to my best friend’s birthday parties, stopped me going to my own birthday parties and a million things in between. It’s even stopped me going to my dad’s wedding, which never gets easier to say. If you have POTS yourself or know what POTS is (in short, an inability to stand without fainting or getting dizzy), you may be thinking – couldn’t you have just used a wheelchair or a different type of mobility aid? Yes and no, is the simple answer. There were always three things holding me back:

1. I felt too unwell, even when sitting down.

2. I thought I wasn’t sick enough to use an aid.

3. I was too self-conscious.

But recently I’ve found that even though I don’t feel any better physically, I’ve kind of gotten used to my symptoms and they don’t scare me as much anymore. And after watching other people with my condition use disability aids on YouTube, I’ve finally realized I am as worthy of using an aid as anyone else. Even as I write those last few words, I’m shocked at how ridiculous they sound. How could I possibly not be sick enough for an aid that’s going to help? But, as ridiculous as it sounds, I know I’m not the only one to have had such thoughts. So now, as someone who’s finally on the other side, I’d like to tell you that you are sick enough and it’s absolutely OK to use an aid if it’s going to help you. Even if it’s not specifically designed for your illness, it is OK to use it if it will help.

Now, onto the trickier issue of feeling too self-conscious to use an aid or to do something. There is no magic wand I can wave to make you feel better about it. But, I can tell you the rule that’s helped me and you can apply it to your own situation, whether that be rocking a wheelchair, a feeding tube or a beautiful bald head.

My little brother and sister have been asking me to take them trick or treating on Halloween for weeks. In the beginning, I kept saying, “I’m sorry, but I can’t,” which wasn’t entirely true. I can walk the short distances between the houses, it’s just the standing still outside them that would have had me on the floor. But, even as I was saying no to them, I knew if I were to use a wheelchair or a walker with a seat, I wouldn’t have to stand still at all.

I had finally learned to live with my symptoms and realized I was “sick enough” to use an aid, and yet I was still saying no. What if I see someone I know? What if someone makes a rude comment? What if someone stares? All of these questions were at the forefront of my mind and I couldn’t seem to shake them off. Until I heard a lady in the street tell her son the golden rule. “Never let how you look become more important than what you do.” That’s it. It’s such a simple and obvious rule and yet, a lot of us with chronic illnesses are not playing by it. But today, for me at least, it’s going to be different.

Something inside my head clicked as soon as I heard her say it and I couldn’t believe I had been doing the exact opposite for so long. So, that same day, I bought a rollator walker and told my siblings I’d changed my mind. We would, in fact, be going trick or treating. The way their eyes lit up made me certain I had finally made the right decision. Afterwards, I told them about the walker and was surprised at how heart-warming their reactions were. They couldn’t have cared less and were so excited for me to incorporate it into a costume. 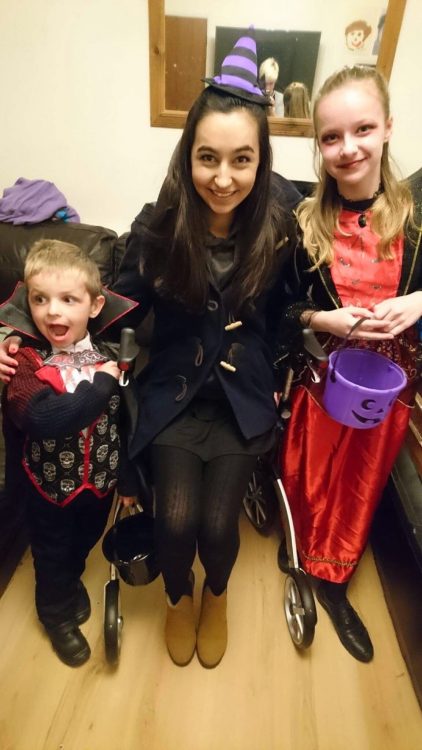 So, it may seem like a small feat, but today, with the help of an aid, I did something I didn’t think I could do. And tomorrow, or whenever you’re ready, you can too.

georgina-drake
Want more of The Mighty?
You can find even more stories on our Home page. There, you’ll also find thoughts and questions by our community.
Take Me Home