Experiencing Psychosis as a First-Time Mum

Please see a doctor before starting, stopping or adjusting medication.

I have bipolar. I’ve had it since I was a teenager. Like many, I wasn’t diagnosed until I was in my 20s. By the time I was diagnosed, my life had effectively stopped. I couldn’t leave the house. I was frightened of everyone and everything. It started out with a bit of paranoia — that the person across the street was looking at me, that everyone was judging me, that people were talking about me. It grew and grew into something that was out of control. I started to think people were bugging my house; listening to me, recording my conversations. That there were people following me, watching my every move. That they wanted to hurt me.

Looking back with the knowledge I have now, I can see my anxiety was causing my mind to have these glitches, moments of irrational fear. But at the time, it was so overpowering and I was so alone, it just kept growing until I could hear and see things other people couldn’t. I could hear a computer hard drive whirring in my room; the one they were using to listen to me. I started to see outlines of figures. They would glow in bright lights. At some point, I started to believe these were angels and demons; their forms grew into more detailed figures. I don’t know why I believed they were either an angel or a demon, but it is a belief I still battle today. Totally irrational, but as time went on it became a core belief; one that is difficult to redefine now.

In time I got help, medication and talk therapy, and things improved. These beliefs were shaken a little and reality set back in to a kind of normality. These experiences lessened and they even stopped for a long time. But I am not free; when I am tired and anxious I am more at risk. Once in a blue moon, I still see these “demons.” With glowing red eyes and snarling features, they skulk in the dark and the shadows, intimidating, threatening, their whole existence is purely to punish the weakness they feed on in my mind.

They create fear because it is the fear that they thrive on, fear that causes irrational thought — just as it does with spiders, flying or heights. As I become frightened, my mind becomes more irrational, more certain there is something there. It has only really started again in the last 12 months because I came off my medication to get pregnant. As life has a habit of doing, it became difficult to manage. I got stressed out and lost my job. The bipolar mood swings began to accelerate and were more severe. As I struggled to settle into a new job, I finally got pregnant, only to suffer with hyperemesis, which can bring even the strongest to their knees. It was during this time my anxiety grew again and due to sickness, I became isolated and housebound for weeks and weeks, which allowed the paranoia to creep its way in — and then they came again.

Those nasty visions torment me when I am at my lowest point. When they arrive, the fear I feel is real, the total terror of seeing them is real, the need to be protected and to protect those I love is real; and yet they are not real. They are a product of a weary mind, a mind that is so plagued with anxiety the neural pathways have short-circuited. Causing a momentary malfunction, a glitch in the system.

I cry, I shake, I may panic and shout out. I beg my husband to help me, to be rid of them. And as swiftly as they come, they are gone. Leaving me shaken to the core, beside myself with fear and feeling angry at myself for letting this happen again.

It is hard to manage and stay well as a new mum. I am obviously weary with five months of sleep deprivation and anxieties about the wellbeing of my son, and of course those normal first time mum nerves. These things naturally make me vulnerable. I also have worries about returning to work, child care, money, etc. like all other new parents. My biggest protection is my medication, but I’ve worked with my doctor to adjust my dose while I’m breastfeeding.

Last night was the first time I experienced it as a new mum. My fear was heightened because I wanted to protect my son. I sent my husband to pick him up and make him safe; which he did to reassure me. 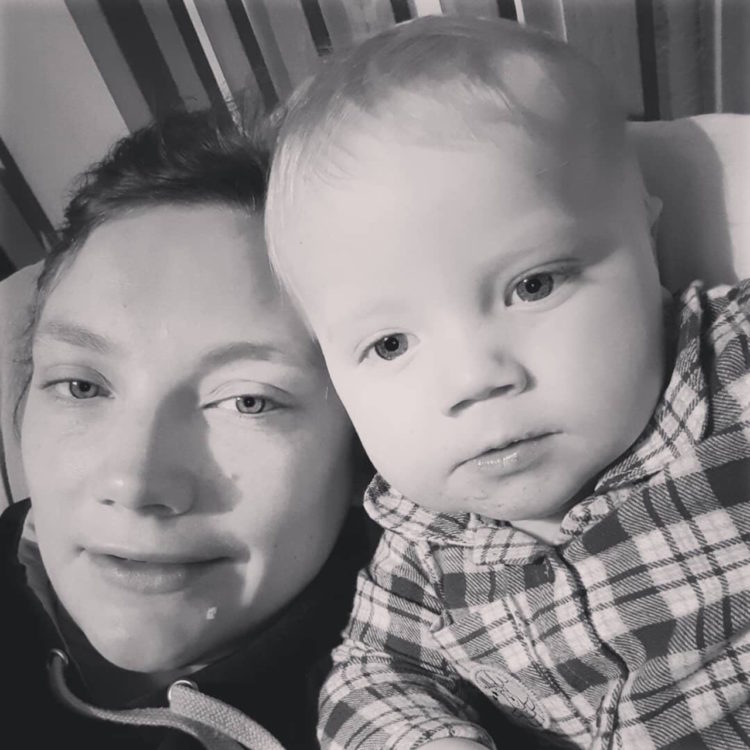 After, when he was back in my arms, I looked at his little sleeping face and saw how peaceful he was. I then realized I needed to face my demons instead of fueling them with fear. I gave them credit when none was needed. I validated them instead of banishing them again. Those demons only have power over me because I allow them to. Of course, it’s not that simple. In reality, I can’t just make them go away and never return.

But I will strive harder to manage the risk factors. I will rest when I can, practice mindfulness, take a moment to relax and talk about my anxieties and fears without letting them dominate me. When I no longer breastfeed, I will re-evaluate the medication. But right now I need to be kinder to myself. Most of the time I am just like everyone else and I am happy and well; that 0.1% does not define me. This is a blip, nothing more and nothing less.