Why My Sarcoidosis Diagnosis Was Both Good and Bad News

They say time flies when you’re having fun…well let me tell you, time has been like a turtle crawling through molasses for me. There’s been a lot of change – with my medications, my symptoms, my diagnoses and my medications again. Honestly, the past couple of weeks have been the worst it’s ever been…but Silver Lining Girl realizes that may have been necessary to figure things out – and (hopefully) make them better.

For the past four years, I’ve cycled through a dozen diagnoses, countless tests and medication changes each step of the way (all this after being dismissed and disregarded by doctors for four years before that because there were no “visible” symptoms). Doctors initially said I had “something autoimmune” (meaning my immune system is attacking healthy cells in my body, rather than protecting me from infection) affecting my joints, my skin and my body as a whole (systemic symptoms like debilitating fatigue, fever/chills, etc.), but they couldn’t pin down which disease(s) caused my symptoms. Prednisone has been the only thing to keep the swelling in check, but it’s brought with it a number of side effects: 100-pound weight gain, weakened bones and teeth, Cushing syndrome, gastritis, blurred vision and more…and it still has not been enough to take away the pain. For these reasons, we’d tried to get off the Prednisone a bunch of times. But each time we tried, my feet and ankles swelled up within just a couple of days, forcing me to go back on the Prednisone.

A few months ago, I decided I didn’t care about the swelling – it was better than some of the long-term problems that Prednisone was giving me. It wasn’t just vanity – the weight that it caused me to gain was making everything else worse, and was more likely to break my weakened bones. Either way, I needed to get off the Prednisone, and my doctors agreed.

We spent several months “weaning off” the Prednisone, and – as expected – my feet and ankles started swelling more. By the time I was completely off it, my feet had gotten so big they couldn’t fit into any of my shoes. I could barely walk – I started using a cane for the first time (which I had to accessorize with hippie scarves like a Steven Tyler microphone), and had difficulty even with that. I went back to my rheumatologist (who had never seen me this bad), and she immediately added some new medications to help, including steroid injections in both my ankles (which wouldn’t have the same side effects as the oral Prednisone). She ordered a bunch of lab tests and finally got some answers – or at least some direction.  That led to more tests, more specialists, more questions…and ultimately, to more answers. 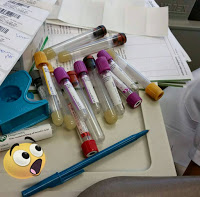 Without the Prednisone and before the new meds could take effect, every one of my joints became unbearably swollen, stiff and painful. I sat on the couch, crying, texting my mom to come over because I couldn’t get up off the couch by myself. After that, she started coming over every day to take care of me while my hubby was at work. I couldn’t move an inch without screaming in pain. My hands and feet got it the worst – not only joints so swollen they couldn’t move, but skin so sensitive that any touch burned. My wrists, elbows, shoulders and hips were not much better. And my knees (oh god, those knees)… Every time I tried to stand or sit (even with the help of hubby, mom or my cane), I felt like they were going to break from the pressure.

In addition to the long-term side effects, it seems the Prednisone was masking the real problem, too. Without it, I’ve had the first positive test results in…ever! Up until now, the problem has been that my symptoms look like X or Y or Z disease, but the blood work is negative. We’ve been treating for various diseases that could be sero-negative (meaning you have the disease without the positive blood test), but never quite fitting into the diagnostic criteria,and never getting the results we were hoping for. Until now.

Without the Prednisone mask, my blood tests were suggestive of sarcoidosis. Suggestive, but not enough to say for sure, as diagnosis requires multiple positives, including radiography and pathology. Next, we did a chest x-ray, which also suggested sarcoidosis affecting my lungs. Finally, a skin biopsy: the pathologist said on its own, she would be on the fence (could be sarcoidosis, could be something else), but with all the other positives, this confirms the diagnosis. 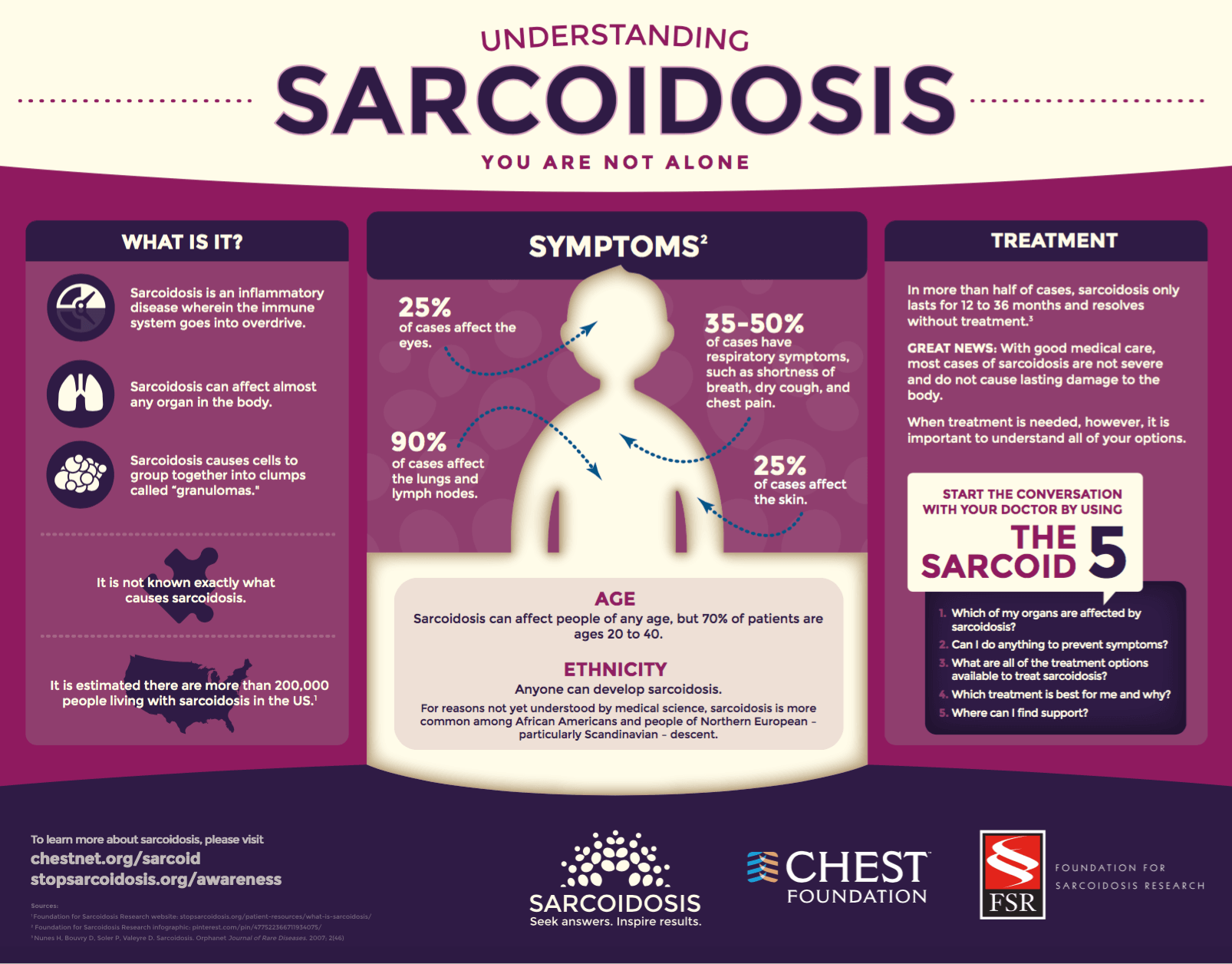 For most people, getting positive test results from the doctor is the worst thing they can imagine. It confirms there’s something wrong, and life will never be the same again. For me, though, I’m already past that point. I’ve known something was wrong for nearly a decade, and it’s only gotten worse over that time. But without a definitive diagnosis, I’ve had to deal with doubt, denial and dismissal – from doctors, employers and people who were supposed to care. My life has already changed, and I know things will never be the way they used to be – I’ll never be the way I used to be. But with positive test results – with an actual diagnosis – I have confirmation. I have validation – from all the people who said (or thought) that it was all in my head, that I was overreacting, that I just wanted attention. No. I was right. I knew something was really wrong. I was really struggling. I am really sick. I’m not “crazy,” I’m not making this up and it’s not my fault. I have sarcoidosis (and fibromyalgia and a handful of other illnesses).

Don’t get me wrong – I am in no way glad to have sarcoidosis. It’s an inflammatory disease that is already impacting my joints, my skin, my lungs and possibly my intestines, my nerves and my heart as well. As the immune system causes “granulomas” to form in almost any organ in the body, it can affect that organ’s ability to function. This inflammation can cause overall body (systemic) symptoms as well. It is painful, debilitating and, to be honest, really scary. I wouldn’t wish this on my worst enemy (not that I really have any enemies). But I am glad to have an answer. And I hope that answer means new treatments will work better, because we know what we’re dealing with now. Still, I know it will never be gone. I can hope for remission (a period of low disease activity), but I will always have this terrible disease, and it will always threaten to come back with a vengeance for any reason…or for no reason at all.

Since we’ve started the new treatments, my swelling has gone down and I’m able to move a little easier now. I can actually get up from a chair with only the help of my cane, without another person to lift me up. I’m still in unbearable pain and still need help to do most things. I don’t know how much more improvement I’ll get from the medication, I don’t know how long that will last and I don’t know which other organs are already affected (or will be). I can only hope that things will get better, that I’ll regain my independence, that I’ll get back to some semblance of a “normal” life.

So that’s where I’m at now: I’m in pain, but I have answers…and I’m trying really hard to hold onto that hope. It’s hard, because so many times before I’ve heard the doctors say they think they know, and so many times I’ve hoped that this new medication would be the one to make things better, and so many times we’ve been wrong. But there’s still a little spark of hope. Things are different now. This time, it’s not just an idea – we know what we’re dealing with, and that’s got to make a difference. I have to hope that more specific, directed, targeted treatment will make a difference. I have to hope it will help. I just have to hope. Because it’s what I do, no matter how bad things get. I still hope.

I’m a glass-half-full kind of girl. More than that, really – I’m the girl who’ll point out that if it’s not full, you don’t have to worry about spilling your drink every time you pick it up! Over the past few years, I’ve been diagnosed with a number of chronic, invisible, and immune/inflammatory illnesses. Still, I do the best I can to stay positive: my blog (floatlikeabuttahfly.blogspot.com) is my way of showing those with similar experiences that they are not alone. We may not be able to defeat our diseases, but we can make sure they don’t break our spirits. At the same time, I’m hoping to educate our friends and family – those who want to be there for us, but don’t really understand the extent of our illnesses and how severely they affect us. With a little help, we can get through anything … together. It’s my mission to make a difference in people’s lives, and I encourage everyone to do that in whatever way possible. A positive word, a helping hand, a donation (of time or money) to a worthy cause, even a simple but genuine smile can mean the world to someone … and that someone could be you!

buttahfly
Want more of The Mighty?
You can find even more stories on our Home page. There, you’ll also find thoughts and questions by our community.
Take Me Home