23 Songs That Helped People When They Were Suicidal

Unless you’ve experienced it, it’s really hard to understand what being suicidal is like. It can be one of the most isolating experiences a person goes through, and what kind of support a person receives during this time is critical. While in this dark space, some people turn to music — whether as a temporary distraction, or to give them something to hold onto, music can sometimes be there for people while others can’t.

Don’t turn to music alone, though. If you’re struggling with suicidal thoughts right now, reach out to a loved one, or call the National Suicide Prevention Lifeline at 1-800-273-8255. You can also text “HOME” to 741-741. Use music to help get you through, but also know you don’t have to go through this alone.

To find out what songs helped people through these dark times, we asked our mental health community to share with us one song they’ve turned to when they felt suicidal.

1. “Addict With a Pen” by Twenty One Pilots

“It helped because it allowed me to cry for a bit and let everything out, and then I could turn it off and feel a little better after just letting my emotions out.” — Allison S.

“It brings back the memories of the many times I could have finally made the fatal [decision]. It draws on the fact that your actions are your own. This song also is a call out for help; it begs for a friend, companionship and love in your lost times. In the last minutes of the song, she wails; it’s as if she is letting all of her frustrations and sadness out, and it’s simply a beautiful piece regardless of how you perceive it.” — John M.

“A friend suggested it to me, it helped them and it helps me. It’s sort of like two people in a conversation and one is telling the other they are not alone and they have been through it as well.” — Cameron M.

4. “Breaking the Habit” by Linkin Park

“It always gives me just the right words to help me off of the ledge. I used to cut a lot, [but] the first time I heard that song, it made me stop self-harming. I have not cut once since the day the song came out. The same goes when I’m feeling extremely overwhelmed or down, I listen to the song it eases my pain and sadness.” — Rose R.

“He reiterates that suicide is never the answer to anyone’s problems. He wants people to know there is always help available, like the National Suicide Prevention Lifeline, whose phone number is the title of this song. He made the song for those in a dark place who can’t find light. He made the song for me.” — Abbie K.

“This may seem silly, but it made me feel like I wasn’t the only one in the world who was dealing with my issues. I would just sit there crying to it, just letting all my emotions out every single time it played.” — Cheryl M.

7. “Don’t Lean On Me” by The Amity Affliction

“It was my reminder that for me I was not OK and I needed to put me first and stop allowing people to make things about them. — Emma-Jean C.

“It reminds me of the impact it would have on my family.” — Courtney M.

9. “Rooster” by Alice in Chains

“It’s heavy and reflects the atmosphere of my suicidal ideations. It’s a song about war from the point of view of the soldier who ends up damaged from it. It’s creepy yet powerful and I felt it reflected my ability to survive abuse and horrid situations in my own life even though I’m not in the military. It’s one of the few songs I can listen to no matter what mood I’m in.” — Lena L.

10. “When the Man Comes Around” by Johnny Cash

“This song plays at the end of the film ‘Logan,’ which came out at a bad point in my life. I remember watching the film and then this song played over the credits, it felt sad listening to it, but it also reminded me that even immortal superheroes struggle.” — Mark R.

“It always makes me feel calm at the very beginning when I’m feeling that way, the lyrics are beautiful and it actually helps me to think that indeed, my future may be better. The next part where it’s only music, is so hard that it makes me cry, scream, let it all out but somehow, it calms me… I think of a new life, not to get lost in the memories and keep my eyes on a new prize.” — Ana C.

“This song just reminds me not to give up on anything. Even through the toughest times, it’s a beautiful song to listen to when you feel like giving up. It doesn’t matter that it’s a couple song…. I just don’t give up when I hear [it].” — Shannon M.

“This is a little bit [different] because it’s Christian music… [It] makes me look for the little things that make life less of a drag.” — Miks J.

14. “My Immortal” by Evanescence

“Listening to the words of that song is like picturing myself in a mirror singing the lyrics with each one of my demons and mental health issues spiraling around me. As much as this unsettles me, it gives me strength because despite each day being a battle I’m overcoming each demon day by day. It helps me to release. It reassures me that I’ve been by my own side all along.” — Stacey P.

“I like the way it talks about ‘you’ll remember how I used to be,’ as in being able to see that soon I’ll get better, soon I don’t feel like this and it will be something we can look back on. It gives me hope to go forward.” — Dani C.

“It pushes me to keep moving forward regardless of how crappy I feel. Plus it’s a ripper to belt out. Putting all my emotion into a good banger always makes me feel better.” — Tiffany H.

17. “One Less Heart to Break” by Patent Pending

“I have the lyrics ‘It’s always darkest before the light tattooed’ on my wrist to remind me things get better. Seen this band live several times and they are very much about suicide awareness and looking after their fans. They wrote this song after a friend [died by] suicide. The last time I saw them, I showed the lead singer my tattoo and said thanks for for writing song that got me through. He gave me a hug said he was proud of me and too keep fighting. They are an awesome bunch of guys.” — Hannah S.

“[This song] saved my life! I had a very stressful day, was out of town for work and felt like a complete outsider and hopelessly alone and hated and like a freak in a bad way. This song was my salvation got me through that night.” — Stacy C.

19. “Blackbird” by The Beatles

“Well, listen to the lyrics. I think of myself as the blackbird always trying to fly instead of struggling on in the ‘dark black night’ that is my every day. The song describes the journey of the blackbird, ‘Take these broken wings and learn to fly’ to use as your own inspiration of how the struggle is necessary to get to a better place again. ‘All your life your only waiting for this moment to be free.’ Keep on flying blackbird.” — Leandra R.

“Listening to this song in the car, I would roll the windows down and just listen to the music with the wind blowing through my hair and it would just calm me and I would feel at ease.” — Dara M.

22. “Water Under the Bridge” by Adele

“It always seems to come on the radio when something changes in my life, so I play it to remind myself things are constantly changing and every pain and sadness will pass, just like water under the bridge.” — Zoe S.

23. “Pursuit of Happiness” by Kid Cudi

“I listened to a lot of Kid Cudi during the worst days of my life and still do as well as many others, and I listened to a lot of depressing songs. Somehow, that helps when I listen to that type of music when I’m in that place. A lot of what he says is very relatable. I listened to this song because it reminded me of a very good time in my life and it always made me feel better by listening to it because I would be taken back to those good times in my mind.” — Travis C. 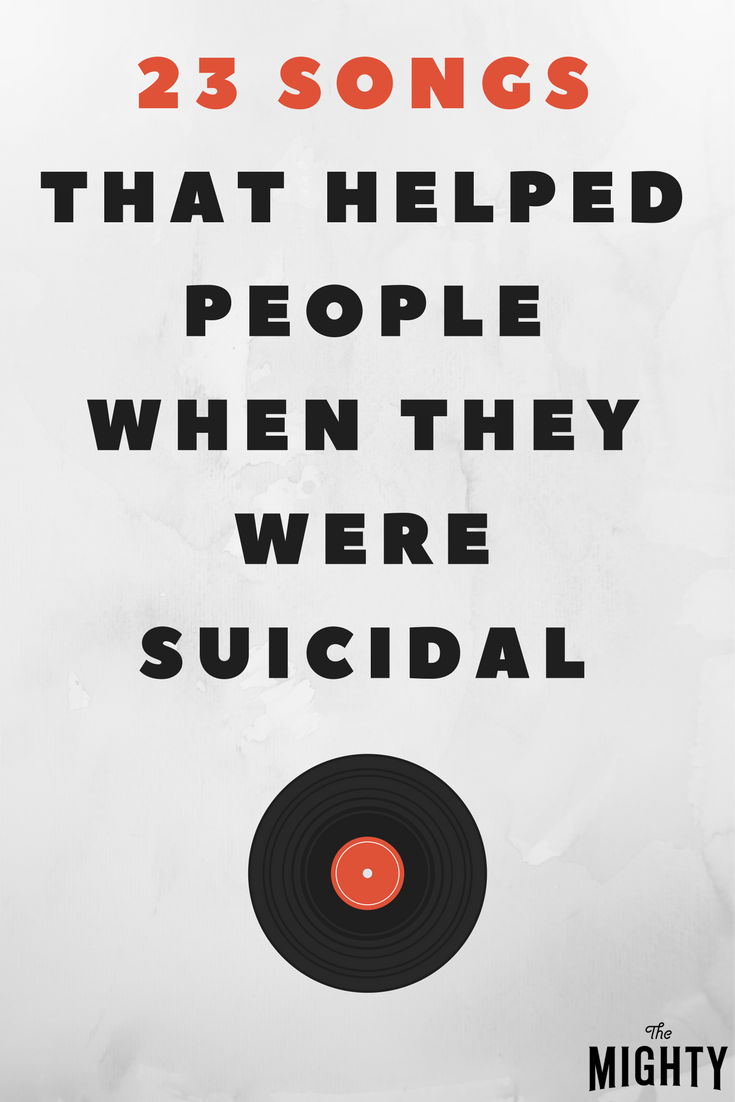 Save
Conversations 279
We use cookies and related technologies to help identify you and your devices, enhance your experience and conduct advertising and analysis. By choosing "Accept", or by using this site, you are agreeing to our use of cookies. You can read more about how The Mighty uses cookies in our Cookie Notice.
Manage Choices
Accept