On Losing My Colon and Falling in Love With Food Again

Eliminating the very real risk of colon cancer wasn’t the only reason I found myself face-to-face with one of Boston’s top surgeons. I was pretending to understand a pamphlet that illustrated just how these wizards planned to remove my deteriorating colon with robo-arms when my surgeon added, “And you’ll be able to eat just about whatever you want.”

I have severe ulcerative colitis, a b*tch of an autoimmune disease that ultimately refused to respond to chemotherapy and restrictive diets and the tiny needles of my tiny Chinese acupuncturist. I hadn’t eaten gluten or dairy in almost two years, and was certain that biting into a slice of non-cauliflower crusted pizza would make me feel as guilty as the time I allowed the Costa Rican pool boy to smother me with his tanning oil and then told my boyfriend, “It was cloudy, very cloudy,” when he asked how my day was.

For the two and a half years I suffered from UC, I did my best to abstain from gluten, dairy, alcohol, sugar and grains – suspected irritants that would only further inflame my already angry colon. And so I was forced to derive most of my culinary pleasure by walking past McDonald’s and inhaling deeply until I managed a secondhand fry high.

That’s not to say I didn’t benefit from eating well during this time. At least I was finally the kind of bikini-ready that would one day prompt my children to ask, “What happened to you, Mom?” And I’m sure some of my organs appreciated the break from high fructose corn syrup and hydrogenated oils, but my colon was like, “Please, bish, keep coating me in coconut oil and trying to heal me from the inside out.”

Scrolling through Instagram and all of these strangers who claimed to have reversed their autoimmune disease through diet was equal parts encouraging and defeating. I had hoped I could do the same, but after two years of feeling sick despite imported turmeric supplements and all the omega-laden salmon my savings could buy, I finally had to admit I would not be one of them.

Years of harsh medications had weakened my 20-something frame to post-menopausal levels, so that my dating profile might truthfully read “27 with the bones of your grandmother, but without the killer family recipes.” Relatives wondered why I looked grey and tired, like the “before” in one of those made-for-TV skincare infomercials. But it wasn’t until my doctor saw just how exhausted I was and told me, “You’re allowed to say you’re done” that I finally gave myself permission to let go.

And so I spent 19 days in the hospital, losing 15 pounds and one colon. I was officially free to eat whatever I wanted, but I felt the kind of suspicion I usually reserve for true-crime drama threads.

“Are you sure I can have this?” I’d asked my doctor when he came in to check on me the morning of my discharge and saw me considering an untouched breakfast sandwich. “Why can’t you?” he said as we exchanged meaningful looks like they do on “Grey’s Anatomy.”

I can’t tell you how I got over the fear, but I can tell you how cool and tart an iced lemonade tastes after being denied as much as water for two weeks. I can tell you how I cried at Easter when my family and I clinked glasses over the sweet Portuguese massa of my childhood, remembering another Easter when I looked down at a bowl of orange Jell-O and knew even that would make me sick. I could go on about the once impossible pairing of prosecco and bolognese that was, of course, preceded by arancini and crusty bread dipped in olive oil. 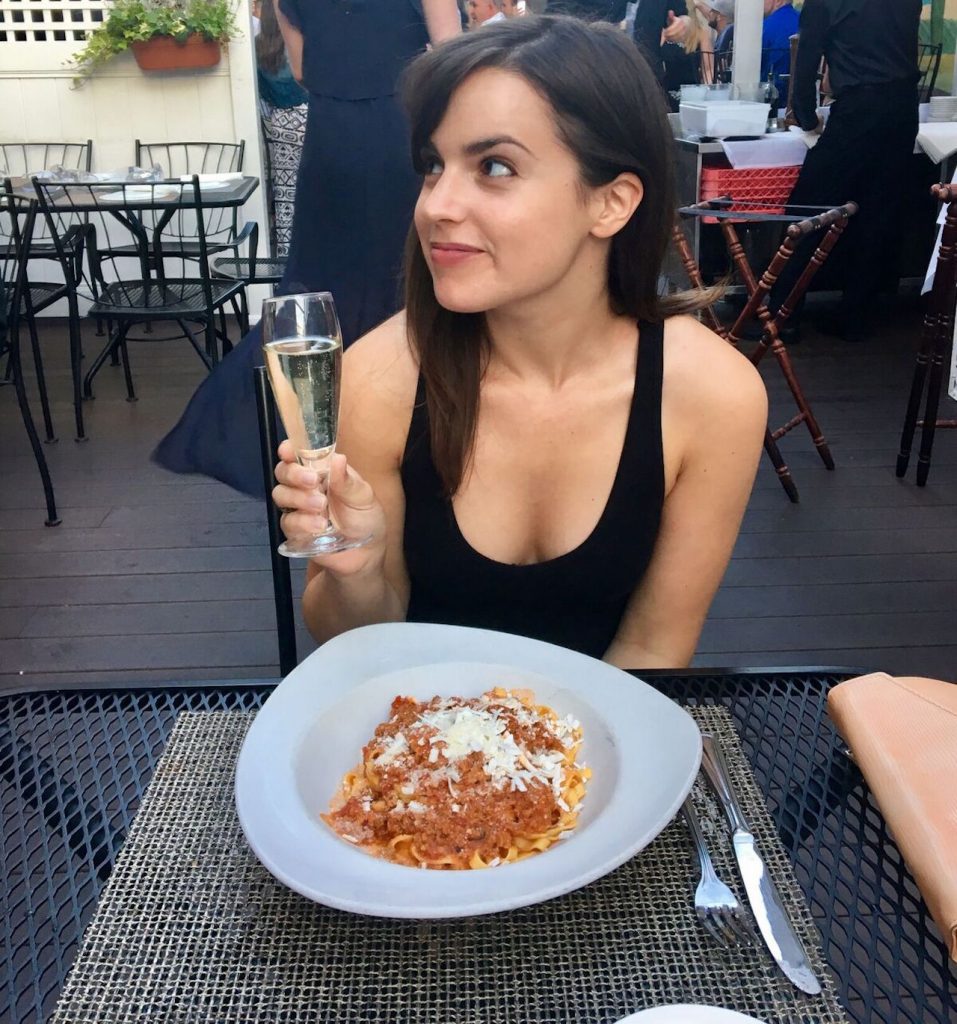 But I think I’ll just call this love.

Bethany Sales is a freelance writer who never understood semicolons until she was forced to live with one following surgery for ulcerative colitis. Her writing has appeared in The Boston Globe, The Huffington Post, SheKnows.com, and elsewhere. Visit bybethanysales.com for more.

bethanysales1
Want more of The Mighty?
You can find even more stories on our Home page. There, you’ll also find thoughts and questions by our community.
Take Me Home