I am anxious. Continually overthinking. Always worrying about everything and nothing. I find myself feeling on edge with nerves and sometimes I can’t even remember specifically what it was that was first troubling me. My brain becomes overwhelmed with a million and one different things.

My mum tells me I’ll worry myself into an early grave (I worry she might be right — ha!).

Being a parent — and being a parent to a child with disabilities more so — scares me at times. I’ve always been a worrier, but these days I worry so much more. I love both of my children so much. And when it comes to my son, Brody, I feel a never ending loss of control over so many things.

From the outside looking in, it’s hard to understand. And from the inside looking out, it’s hard to explain. But these are a few of the things that invade my brain, mostly on the days where I struggle to keep swimming.

1. I Worry About My Child’s Continued Happiness

When I was growing up, I knew of a family who had a child the same age as me who had a learning disability. I was once told when he reached adulthood, there was a time when he looked out of his living room window and watched the children outside playing. For a short time, he couldn’t understand why he wasn’t able to go out and play anymore.

On the days when I am consumed with overthinking Brody’s future, this story always comes back to me. I know now that he wasn’t as upset as I imagined. I suppose sometimes these types of scenarios are harder on parents because we want to protect our children, who are vulnerable, from sad things happening. And sometimes we just can’t.

I worry about Brody’s feelings being hurt and not knowing or being able to comfort him. More than anything, I want him to be happy. Always.

2. I Worry About Unexpected Loss of Ability

Parents who have children with disabilities know not to take simple things for granted. We are continually reminded how precious health is, if not by our own children, then by our friends who walk similar paths. Because Brody has an unknown syndrome and epilepsy, I worry that regression in his abilities could rear its ugly head at any time.

Over the past six months, we have seen this in terms of his mobility. Not knowing why or how it will continue makes me uneasy. His left leg has become significantly weaker and is increasingly losing stability and muscle.

When we meet with a specialist next month, I will worry about the hospital results — or lack thereof.

3. I Worry About What He Can’t Tell Me and What I Might Miss

When your child can’t tell you what they want or how they feel, it’s a constant guessing game. You have to trust your gut (which often can be wrong) and rely on others to interpret your child’s wants and needs when you’re not around.

I hate that he won’t be able to tell me how his day went at school — that I have to rely on a communication diary.

I worry about how frustrating it is for him not to be understood. How I would feel if I couldn’t talk — even if just for one day.

I worry the most when he is unwell and I just can’t figure it out. Should I call a doctor? Should we take him to the hospital? Is this something serious? Or is it just a stomach ache or sore throat? Brody has a high pain threshold and I worry he might hurt himself and I would be none the wiser because he might not show it and can’t tell me.

4. I Worry About Him Hurting Himself

I constantly worry about this. He has wobbly legs, poor balance and absolutely no danger awareness. I’m scared he’ll hurt himself the second we turn our backs or because we don’t react quickly enough (hello my good friend guilt). Even a visit to a park puts me on edge, worrying that he’ll fall off of equipment when his dad and I are right beside him. On a scale of helicopter parenting, you could say we’re Chinook.

Disabled people and their families are continually faced with barriers to inclusion because of a lack of accessibility. A lack of changing places in public restrooms, gravel paths, no lifts, no ramps. The list is huge and affects so many people. I worry about how these things will affect us every time we leave the house. And I know that as Brody gets older and heavier, these things will get increasingly more difficult for us as a family.

6. I Worry About Strangers (Of the Arsehole Variety)

I worry about how I will react when someone is ignorant towards Brody. Especially as he gets older and no longer passes as “cute.” There’s a fine line between anger and sadness and I teeter on the edge of going either way. I notice more and more as he gets older the stares from strangers, which aren’t accompanied by smiles. You know the ones when they’re looking just a bit longer than necessary? He might make noises. He might become upset. He might try and innocently touch someone’s leg as we walk by. We can’t predict his sensory issues or when and how they will affect him. I worry about how others will treat him.

7. I Worry That Everything Is My Fault

Did I eat the wrong things when I was pregnant?

Did I have too many layers on him in his car seat as a baby?

Did we miss seizures?

Should I have knocked on more doors sooner?

Endless what ifs. And guilt.

8. I Worry About Outliving My Son and My Son Outliving Us.

And then I worry about Brody outliving us and leaving him on his own. Who, that we know, would actually put their hands up to care for him? Who would love him as much as we do and protect him from the world?

Someone once put it into the most depressing meme I have ever seen on Facebook. It looked a little like this… 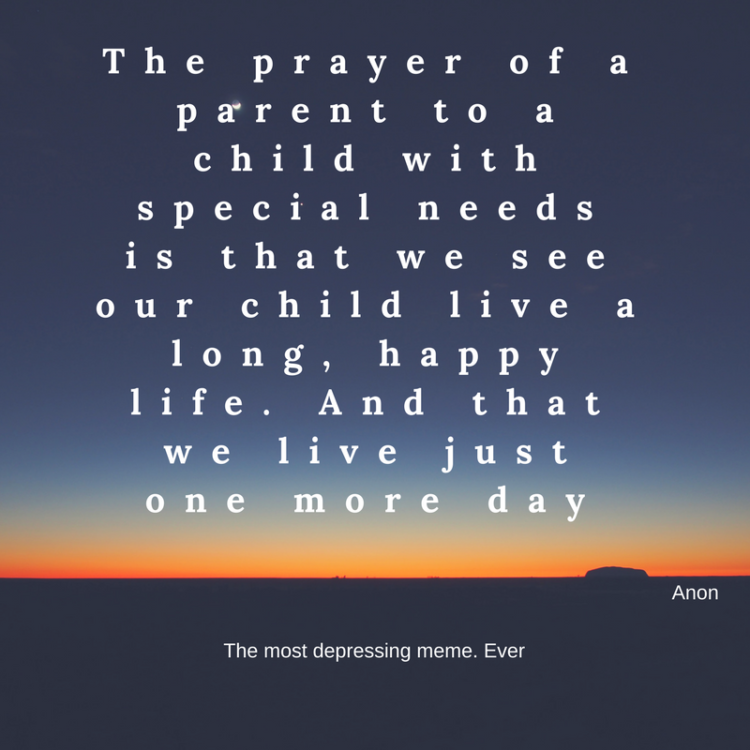 I am trying. Trying to worry less. Live each day as it comes. Because let’s face it, worrying changes nothing.

Ironically, my kids favorite song at the moment? Bob Marley’s “Don’t worry. ‘Bout a thing. ‘Cause every little thing gonna be alright.” I kid you not.

Maybe they’re trying to tell me something.

Laura is the mom to Brody and Sydney. Brody has an undiagnosed genetic syndrome along with global development delay, epilepsy, autism and mobility problems. She writes about their life with no diagnosis on her blog, Brody, Me &amp; GDD. Laura is currently campaigning for supermarkets to sell bigger nappies for children with additional support needs. Her petition can be found here. She also campaigns for Changing Places toilets and wants to raise awareness of this issue through social media.

laura-rutherford
Want more of The Mighty?
You can find even more stories on our Home page. There, you’ll also find thoughts and questions by our community.
Take Me Home