Why I'm Excited to See a Barbie Doll With Vitiligo

If you’re struggling with self-judgment, check out The Mighty’s No Shame group. It’s a safe space to share how you’re feeling with other people who get it.

They now make a Barbie Doll with vitiligo. A model with vitiligo walked the Victoria’s Secret Fashion Show in 2018. You can even add vitiligo to your avatar in Animal Crossing. As someone who has had vitiligo, an autoimmune skin condition that causes pigment loss and white skin patches, for almost 20 years, I find myself asking, when did vitiligo become cool?

I don’t mean to suggest this newfound coolness for vitiligo is bad. In fact, it’s amazing. More representation of different bodies and different skin will always be seen as a positive by me. I’m sure it’s comforting to kids and adults newly developing vitiligo. Yet still, it’s an odd experience though to watch this change occur.

I have had vitiligo since I was 6 years old. It started as a raised red circle on my stomach that turned into a white patch. Then, the white patches continued to appear on my body, especially if there was some trauma to the skin. When I fell down and scraped my knees badly, my knees turned white within a few months. Where clothes continually rubbed, like my armpits and inner thighs, the skin lost its pigment.

Several doctors, including my pediatrician, did not know what was causing my spots. It wasn’t until we went to a specialized dermatologist that we first heard the word “vitiligo.” And it was overwhelming. We didn’t know how fast it would progress or how much pigment I would lose. Not that vitiligo typically causes serious health problems, though it can affect your thyroid and I have had mine checked, but people do stare when your skin is not one uniform color.

As a kid, my classmates asked why my knees where spotted. At dance competitions and the local pool, other kids and even adults starred at my splotchy stomach. There were definitely times when I got upset about having vitiligo and just wanted “normal” skin, so no one would stare. I don’t blame people for staring; people stare when they see something different and are curious. I’m guilty of it myself, but I always appreciated when people just asked what the spots were instead of just staring. 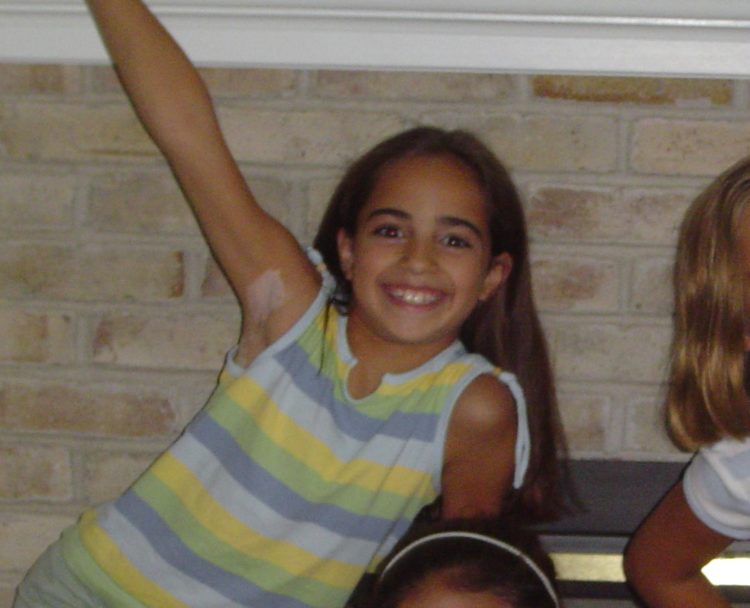 My family and I ended up doing some light treatments on my spots during middle school. This was less because of people staring at my spots and more because of a fear of not having pigment to protect my skin and insides, though both were factors in the decision. This treatment involved driving 45minutes every other week to a dermatology office where they essentially purposely gave me sunburns on my spots with narrowband ultraviolet B. It’s safe, but was painful at times, just like a really bad sunburn. And it worked somewhat. Gradually, my stomach re-pigmented and my armpits filled in some. But my knees and left eyelid stayed spotted.

Oddly though, years after stopping the light treatments, many more of my spots have filled in. For example, now my knees are completely re-pigmented. I don’t know if these changes were because of the light treatment or just my immune system being random, and I’ll never know. At the same time, I lost pigment on my hands and wrists. Like I said, immune systems are weird.

I wish there had been a vitiligo Barbie when I was a kid. Maybe it would have helped me feel comfortable in my skin sooner. I was typically fine with my vitiligo growing up and didn’t mind it, but there were nights when I cried if I found a new spot. Now, as an adult, I’m totally fine with my vitiligo and I’d even venture to say I love how unique and beautiful the spots can be. Sometimes I even miss the spots that have re-pigmented. But maybe this comfort would have come easier if I was more exposed to representations of vitiligo. And maybe if others had been more exposed to vitiligo, they would have been less likely to stare out of curiosity at me. So much more often now, when I answer that “the spots are vitiligo,” people nod in understanding and have heard of it before.

This is why I find myself asking, “When did vitiligo become cool?” and more importantly, “Why didn’t it happen sooner?” This is one reason why diverse representation of bodies matter.

The Mighty’s No Shame group is a safe space to talk about the things that make us feel bad about ourselves and how to overcome those challenges.