Lauren Hill passed away early Friday morning. The 19-year-old basketball player touched the lives of thousands with her preserverance in the face of terminal brain cancer.

Hill, from Cincinnati, had already committed to play ball at Mount Saint Joseph University when she got a diagnosis of Diffused Intrinsic Pontine Glioma (DIPG) last year. Knowing there was a chance she would not make it to the opening game of the season, staff members, the NCAA and the opposing team worked together to move it up and make it a home game.

On November 2, Hill realized her dreams of playing college basketball. She took the court with her team to face off against Hiram College with thousands of people packing the arena to support her. When she scored the first points of the game a celebration broke out in the stands.

Watch the inspiring moment in the video below:

“I never gave up for a second, even when I got a terminal diagnosis,” Hill told WKRC News. “I never thought about sitting back and not living life anymore.”

Her legacy lives on not only in her inspiring message but also because she helped raise more than $1.5 million in donations that will go towards finding a cure for pediatric brain cancer, Sporting News reported.

Learn more about her journey in the video below:

“She was a huge gift from God, and if he takes her back then we’ll have to deal with it,” Lisa Hill, her mother, told WKRC News. “But while we had her for 19 years, she was ours.” 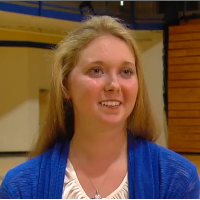