What I Would Tell My 9-Year-Old Self Who Wrote, 'I Want to Die'

To this day I’m not sure why I wanted to die. But I still remember writing it.

I am not even sure what to say next…

I have complex post-traumatic stress disorder… and that’s just one diagnosis of over 20 things “wrong” with me. However, my PTSD has shifted my life in a way I never thought would even be possible. I had dreams of dancing as long as my heart was beating. I had dreams of traveling around the country and the world exploring art and learning endlessly about the beauty and the struggle of life through the lens of an artist. I had dreams of playing music on stage. I had dreams of becoming a person who could help change the world through art. I was on my way until something changed — something gradually began to suck the life out of me until I could barely walk and move. I was on the couch for a month straight and had to stop dancing. I haven’t danced since the summer of 2011.

I had been living with bipolar disorder type II for a few years after being wrongly diagnosed with unipolar depression. I had it under control with medication, therapy, healthy eating and exercise. A few months before I stopped dancing I started getting intense headaches and small bouts of something that felt like dizziness. The feeling was so strange, like I was somewhat detached from reality and couldn’t see… except I could see. My eyes were seeing, but my mind wasn’t. The headaches became so bad I had to stop dancing. I began to have a buckling right leg and low-grade fevers. Then it was chronic pain everywhere. Then it was abnormal movements on my right side of my body. Then it was what looked like seizures. I was chronically exhausted and had no idea what was wrong with me. Eleven months of doctor appointments and they told me I had psychogenic non-epileptic seizures and basically a neuro-psychologically-based illness called conversion disorder. I was absolutely dumbfounded. I had been doing so well after all the terrible nightmares I went through of struggling with bipolar disorder, two car accidents, numerous injuries from dance, etc… What on earth could cause this psychosomatic illness? I was in complete denial.

It all started coming to me slowly — hint by hint I started having gut feelings of something bad. I wasn’t sure what it was. I began to have unexplained extreme fear and anxiety. I couldn’t sleep at all. I had bouts of dissociation so bad that I had no idea where I was or who exactly was inside of me… After many months of whys, whats, hows, whos, wheres, and endless nightmares, I began to piece together enough evidence.

I am a survivor of childhood sexual abuse, ongoing harassment, rape, sexual assault, and car accidents. I don’t want to even admit it.

The turmoil my family has gone through with all this… I can only imagine what my amazing, loving, and giving parents feel. I lost friends and felt like I lost my life.

I lost my ability to dance, to drive for four years now. I have a fear of walking outside half the time. I wake up every morning so anxious I have to take my meds immediately and still feel like I don’t have control. I still have to struggle with acceptance of what happened to me. I struggle with the fact that I barely even remember what the hell happened to me. I had a dissociative break and had to quit working for six months two years ago. I’ve attempted suicide three times and almost tried many other times. My stress is so high, I think I could power the entire city of Chicago with it.

Along with this diagnosis of complex PTSD, I also managed to get endometriosis stage 3, post concussion syndrome, and multiple musculoskeletal injuries and conditions. I think I listed about 22 or so diagnosable ailments.

Here’s how I function:

I have days where I just cannot function, and then somehow I end up making it to the next day.

I think of myself as a warrior. Finding power inside of me is hard because my little self wants to take over a lot. I find my nearly 30-year-old self instead and see if she can be strong for my little self.

If I could go back to my 9-year-old self writing that statement, I would tell her, “You’re the strongest person I know.” 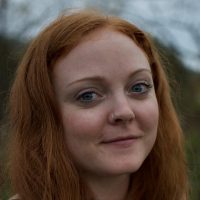