Opening Up About My Premenstrual Dysphoric Disorder

I have been keeping a secret from my loved ones, but I wanted to share it in honor of Premenstrual Dysphoric Disorder (PMDD) Awareness Month, which is in April.

I was diagnosed with PMDD in November 2017 and to publicly share that with you is scary; it makes me feel very vulnerable. I want to share my story because PMDD doesn’t have much exposure. I want women who relate to my experience to go to their doctor with some knowledge and to be able to advocate for themselves. I want them to know that this is a real condition.

So what is PMDD? PMDD stands for premenstrual dysphoric disorder. No one knows the exact cause of PMDD, but there are a few theories. Women with PMDD are hormone-sensitive to the fluctuating hormone levels that occur every month. PMDD is not premenstrual syndrome (PMS). According to the U.S Department of Health, about 75 percent of women experience premenstrual symptoms, while PMDD affects 3 to 8 percent of women of reproductive age. While both PMS and PMDD have physical and emotional symptoms, PMDD causes extreme symptoms that can affect a woman’s daily functioning and personal relationships. Despite its connection to a woman’s menstrual cycle, it is not a hormone disorder. It is a suspected genetic disorder with symptoms that worsen over time. It is not a hormone imbalance, but because I also have polycystic ovary syndrome (PCOS), my life is even more challenging. PCOS is a hormone imbalance which causes me to deal with other symptoms, too.

It can be difficult to get diagnosed with PMDD because a lot of doctors misdiagnose or don’t believe their patients have it. There are no current blood, X-ray or urine test that can provide a definitive diagnosis of PMDD. You will need to chart your symptoms and receive other labs to rule out other possible illnesses. It took a second doctor to realize that I had PMDD after seeing me when my symptoms were at their peak and learning about my medical history. My first doctor ignored me when I said my symptoms appeared before my periods, and I begged her to look into it. I even showed her a symptoms checklist that I marked which showed I had all the symptoms of PMDD.

Below are the criteria to be diagnosed with PMDD. Over the course of a year and during the menstrual cycles, five or more of the following symptoms must be present. These symptoms occur a week or two before your period begins and disappear within a few days of the onset of bleeding.

When I read the criteria list, I cried because it was describing me. About 10 to 14 days of my cycle, I experience every single symptom on the criteria list. Some months can be harder than others. I had two periods, so I felt the PMDD symptoms for a majority of March. I was wound up from the emotional and physical stress of PMDD; I begged and prayed for my period to get arrive. It was a very stressful month.

Women with PMDD experience a variety of symptoms monthly; no one is the same. The average woman with PMDD will lose between three to seven years of productive life due to her symptoms. This fact hit me deeply because I realized it had affected me for that long. My doctor believes I’ve had PMDD for many years because I have quit jobs and dropped out of schools due to my symptoms. I was dealing with heavy periods and symptoms from PCOS, but didn’t realize I had PMDD.

I thought it was my PCOS causing me emotional issues. I started to think dark thoughts about my life. Feeling unworthy, ugly and that no one wanted me. I believed in my head that my husband would be happier if I were not alive so that he could be free and not be a prisoner to my health issues. These dark thoughts all went away once I started my period, though.

This happened again for the next few months, and I caught on. It terrified me that I didn’t know what was wrong with me. I immediately made an appointment with my doctor, and she didn’t acknowledge or research my symptoms. I thought maybe it was just in my head and I should just let it go, but my symptoms kept coming every month, and were getting worse. I was very hopeful when we moved to New York and prayed for a doctor that was willing to hear me out, which I found. After a few months, I got diagnosed with PMDD. It brought me so much relief to finally be validated. This acknowledgment alone can bring wonders to someone with a chronic illness. It brings hope and strength to an already tired body. I believe God knew what he was doing when he moved us here.

According to the Gia Allemand Foundation, “An estimated 15 percent of women with PMDD will [die by] suicide in their lifetime while a larger percentage experiences, thoughts about suicide and self-harm.” This percentage of women with PMDD and estimated rate of suicide shows 750,000 female suicides per year. That is from PMDD alone. They are more than just PMS symptoms when they cause harm, depression, irritability, rage or feeling out of control. These symptoms are affecting our relationships, jobs, schooling and lives. Premenstrual dysphoric disorder is a condition that many women may never know they have. For some of these women, it will be too late. The video below is the perfect representation of the mental battle a woman with PMDD experiences:

As for my treatments, I’m seeing mainstream and holistic doctors. I meditate, eat healthy, work out and journal. I’m in support groups that inspire me when I’m at my lowest, and I give back when I’m at my happiest. I know women in their 20s who are getting their ovaries and uteruses removed so they can be free from PMDD. But I also know women who have done the procedure and regretted it. It’s difficult for me to comprehend. My husband and I are trying to conceive, but my periods cause me so much pain. There is not a single treatment that can “cure” this. Sure, there can be things that help manage some symptoms. But the thing about PMDD is it takes time to find your protocol. It may work for a few months and then stop. It’s very complicated, so this will be a long journey for me, my husband and my doctors. I want to find a way to manage my symptoms so I can finally live a life that doesn’t revolve around PMDD and PCOS.

The main reason I’m sharing my story with my family and friends is for love and understanding. I’m struggling, I’m sick, I’m tired, but I’m trying. I want you to understand that when I pull away, it’s not because of you. I’m struggling to keep positive and mentally-sound when I’m dealing with PMDD symptoms, but also know when I reach out to you, it’s because I’m trying not to feel scared, lonely and lost. In March, I called a crisis hotline for the very first time because I didn’t have a way to reach my husband. My symptoms were through the roof and I dipped dangerously low. I’m so thankful for my friends who came over to hang out and comfort me. I had a specific friend who saw me at my worst and didn’t understand my situation, but she still supported and loved me anyway.

I know some of you may not understand and that’s OK. A lot of women with PMDD, medical professionals and even experts don’t truly understand it either. I know my part in all of this is to share my journey and hopefully reach one person. I trust God in all of this; I believe he brought me here to finally get the care I need so I know I will be alright. To the women who are struggling with PMDD, you are not alone and you are loved. Please reach out to me if you need a friend. Sending you the stars, the moon and love. 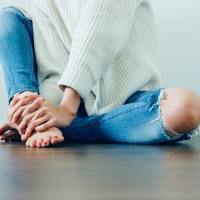