How a Depression Screening Saved My Life

“Are you experiencing any symptoms of depression?”

I was caught off guard with that question. I was sure — from my intensive WebMD search and past experience — that I had a sinus infection. I was expecting to be questioned about my physical ailments, get my antibiotics and go on my way. I hadn’t given my mental heath much thought. Was I having trouble sleeping? I wasn’t sleeping as well as I used to. Was I feeling tired or had a lack of energy? I often found myself nodding off in the middle of reading a book, when I used to read a chapter a night. Any changes in appetite? I had frequent headaches, stomach aches and a suppressed appetite compared to a few months ago. But I chalked it up to stress. I thought depressed people want to kill themselves. I never had any thoughts of self-harm.

“Are you experiencing any symptoms of sadness?”

This was a more complicated question. I had, in the past, experienced “rough” patches. The first time occurred when I was in college. I entered my freshman year knowing that I had an anxiety disorder, but I underestimated how difficult  it would be to balance college life. It wasn’t so much the class work that bothered me…I was always good at school. It was the anxiety of having to make life decisions for myself and knowing that I could utterly fail. Should I study abroad? Should I take the internship? When should I start applying for jobs? What comes next? I called it the ”what-if syndrome.” I convinced myself that I was fine, that I was handling the pressure on my own. Then senior year hit me like a hurricane. I got into a bad car accident and stopped driving for the first half of the year. I was forced to give up my volunteer position at Big Brothers Big Sisters due to lack of transportation. I found out my dad needed to have open heart surgery to fix an aneurysm. My anxiety about driving on the highway prevented me from going home to see him. The guilt made me feel terrible about myself. I felt like I was letting everyone down. My “friends” stopped inviting me out because I was “bringing down the mood.” I felt isolated and alone. I believed that, truly, I could die alone in my dorm room and not a single soul would notice. Finally, I went to the counseling center and got into therapy before I did something that I couldn’t take back. It helped enough to get me through to the other side. I refused medication, even though I learned enough in my studies to know that I was depressed. But I was fine handling it on my own. The past few months have just been another “rough patch.” So I thought.

“Have you lost interest in activities that you used to find pleasurable?”

This made me stop and think a little deeper. In 2018, I was let go from my job. It was not a job that I expected to hold on to forever. However, I hadn’t planned on leaving it so early. I  had no backup plan. I was going to be kicked off my dad’s insurance at the end of the year. I didn’t have enough money saved up to move out of my parents house as I had hoped to. I had a college degree, but it didn’t seem to matter. The job search was rough. At first, I was confident that I would find another job within a month. I was naive and unrealistic. It took almost a full year before I found a company that would hire me full time with benefits. The not knowing, the waiting, the rejection…it all took a toll on my mental health. I stopped wanting to get out of bed. I stopped wanting to get dressed. I watched hours of trash reality television (no offense to the Kardashians) in between job searches. I just had no energy to do anything else. I stopped wanting to go out with my friends. My confidence slid so much that I even stopped going on dates because I no longer saw myself as desirable.

“Are you experiencing any feeling of hopelessness?”

My doctor had hit the nail on the head. Finally, a name that described how I had been feeling for months. Once I started being honest with myself, I realized I might have been going through more than just a “rough patch” The decision to go on medication was not an easy one. It was a journey that I had to go on for myself. Medication, I should stress, is not the one-size-fits-all solution for anxiety or depression. I have been in therapy on and off since college. I exercise. I do yoga. I write. I volunteer when I can. All of these activities help to keep my anxiety under control, and make me feel useful so that I don’t slide into depression. Alone, they were not enough for me. For the longest time I refused to go on medication. The warning labels scared me. I hated the idea of my brain being altered by chemicals and was hesitant to try something that I could potentially become dependent on. Not only could I become dependent, but the risk for suicidal thoughts could actually increase with the use of antidepressants in teens and young adults. The risks did not seem, in my mind, to outweigh the benefits. There came a time when all of that changed.

This time around, it was different. The black hole was back, but this time I didn’t see a clear way out of it. It consumed me, turning me into someone whom I didn’t recognize. I am, by nature, a positive person. Depression took that away from me. I stopped looking at myself in the mirror because I didn’t like the reflection staring back at me. I stopped caring about my body. I lost weight (not in a good way). I was breaking out constantly like a 16-year-old, even though I was in my mid 20s. I only showered  every two to three days because I was spending so much time in the house. But even worse, I stopped caring enough about the person on the inside to do anything about it. Isolating myself from the people I care about. Losing pleasure in activities I once enjoyed. Feeling guilty for things that are out of my control.  These are all early signs that were detected before my depression progressed to the point of no return. My doctor and I talked about treatment options at my next physical.  The results were not instantaneous. It took six months to find a dosage that worked for me, and about a year to feel the full effects. There is no guarantee that the feelings of hopelessness will not return. In the meantime, I can say that I am well, both physically and mentally. This year, I have a new reason not to skip my yearly appointment. Depression does not have to equal suicide. It takes two minutes to screen for diabetes. It takes two minutes to screen for cancer. It takes two minutes to screen for depression. All you have to do is ask.

Share
or  Copy Link
Link copied to clipboard.
Be first
135 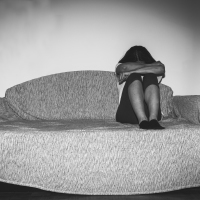