I don’t make friends easily. In fact, I actually really suck at making friends. Between terrible social anxiety and debilitating depression, making friends doesn’t come easily to me. Yet, once in a blue moon, I’ll click with someone. This happened about a month ago with a girl I met at a camp we were working at together. We didn’t know each other for very long, but in the short time I spent with her, I immediately knew how special of a person she was. We laughed together, cried together and stayed up late just talking. When I opened up to her about my struggles with depression and self-harm, she was so incredibly supportive for only meeting me just a couple weeks prior. Her support and friendship brought tears to my eyes.

I unfortunately had to make the decision to leave the camp early for mental health reasons. I was no longer in a place where I could take care of myself enough to properly do my job. It was heartbreaking and having to say goodbye to someone I had grown so close to in such a short amount of time was incredibly difficult. Like I said, I don’t make friends easily, so having made such a good friend and then needing to leave earlier than expected, sucked. Moving back home was not easy, either. Being back in a place where I struggled so much for so long just intensified the depression and urges I was having.

Tonight was especially difficult. Thoughts of suicide plagued my mind and urges to self-harm were growing stronger. Yet, as fate would have it, this girl texted me and asked how I was doing. I told her I was struggling and her response not only caused me to break down in tears, but filled me with such hope. She cared. And when you’re struggling this much, that’s all it takes — just someone that cares.

In her text she said,

This breaks my heart. I really want to help you like you have no idea. You have so much to look forward to you’re literally 20 years old. I know there isn’t necessarily a reason with depression and that’s why it’s such an exhausting battle but i can’t say enough how much fighting is worth it. I just want to scream in your face how much you matter and how much people need you here. Please just fight for me. I’ve only known you for a month but I don’t give a shit I know very well that you belong on the earth. Life will get you and it always will but I know that you will come out of this darkness and you will see so much light you will look back and thank yourself for fighting. My heart is literally breaking. I know depression is the darkest thing there is and i truly don’t know how you feel but i just can’t even think about how you believe there’s no solution to this besides dying. There has to be something please there has to be. I know you’re strong and I can picture you in the future having a family and being an advocate for others going through this. I need you here. Seriously. I will repeat myself over and over again. I’ll stay up all night to make sure you fight. I’m serious.

Even just typing that has me in tears all over again. She cares. She cared so much, even though we had only known each other a little over a month. I can honestly say it would have been so much easier for me to give up and hurt myself tonight if I had never met her. But someone caring that much — to take time out of their 18+ hour work day to talk to you and be there for you in such an impactful way — that will give you a reason to stay. People like that give you a reason to fight. They make you believe that there is still good in this world and that it’s worth fighting to find. When you can’t fight for you, they fight for you. Just by being there. By caring. By sitting with you (literally or figuratively). By being a friend.

Words cannot begin to describe how thankful I am to have met such a beautifully kindhearted and incredible girl and how lucky I am to call her one of my best friends. Tonight, she reminded me why life is worth living. Why staying is worth it. Tonight, she was a hero to me. And you can’t put a price on that kind of gift.

Share
or  Copy Link
Link copied to clipboard.
Be first
138 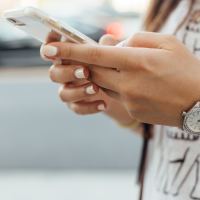