During a day meant to boost morale and address mental health stigma, Col. Michael A. Miller, commander of the 2nd Bomb Wing at Barksdale Air Force Base in Louisiana, came under fire for comments about those who die by suicide. Miller has since apologized.

On Friday, Barksdale Air Force Base hosted a Resiliency Day, which included bonding activities for Air Force personnel as well as a 1.2 mile run and a series of messages designed to start a conversation about mental health. Miller addressed the assembled military members following the run, encouraging them to connect with each other and find ways to reduce suicide before saying suicide was a “chickenshit way to go out.”

According to posts shared to the Facebook group Air Force amn/nco/snco, Miller said, “I have to be honest, milking yourself is a chickenshit way to go.” Another commenter said Miller continued by explaining the Air Force was failing at its suicide prevention efforts and people need to feel safe enough to reach out for help. Others said Miller made some good points, but his words were “harsh” and drew criticism for their insensitivity.

According to Military.com, 321 active-duty military members died by suicide in 2018. The suicide rate was tied for the highest number of suicide-related deaths with 2012 since the military started collecting data in 2001. Active-duty military personnel and veterans also have a higher risk of developing post-traumatic stress disorder (PTSD) and depression. Service members are 15 times more likely to develop PTSD than the general population.

“We are not satisfied with flat-lined suicide death numbers,” Brig. Gen. Michael Martin, director of Air Force Integrated Resilience said, according to Military.com. “The Air Force is dedicated to a comprehensive, leadership-driven strategy with the ultimate goal of supporting airmen and their families early with a robust network and never losing another airman to suicide.”

On Monday, Miller apologized for his comments in a statement and again pointed out the importance of focusing on mental health in the military.

“First, let me say that my choice of words was poor. I referenced the act of suicide in a manner that was insensitive and inappropriate. However, that one sentence doesn’t capture the context or intent of the message I was trying to relay,” Miller said, according to Task & Purpose. He added:

Friday’s event gave voice and generated awareness on a topic we must tackle – preventing suicide through strengthening our Air Force family. As a sitting commander, I take this issue very seriously and care about every single one of our Airmen. I would do anything to help any one of them who may be suffering …

I want all Airmen to know that they are surrounded by a family who cares for and values them. We have the will, resolve and support in place to assist any member that is struggling. They are never alone or without help. Last Friday, I challenged and pleaded every Airmen of the 2nd Bomb Wing who is struggling to call me. I want them to know they are not alone.

Share
or  Copy Link
Link copied to clipboard.
Be first
56 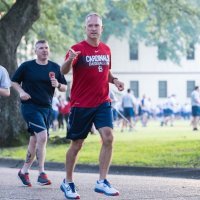