November is Alpha-1 Antitrypsin Deficiency Awareness Month and it’s being recognized by the Alpha-1 Foundation, the State of South Carolina, as well as other states.

You might be wondering why is Alpha-1 Antitrypsin Deficiency Awareness Month so important?

Alpha-1 antitrypsin deficiency (Alpha-1) is an illness that at least
100,000 Americans have been diagnosed with, according to the Alpha-1 Foundation. But there could be more people suffering with the illness who aren’t aware they have it, or know what it is. It occurs when the liver doesn’t release enough alpha-1 antitrypsin protein, which helps the lungs function properly. With low levels of the protein, lung illnesses and liver disease are more likely to occur.

Alpha-1 antitrypsin deficiency is a disability as it can affect oxygen saturation levels and the respiratory system. Symptoms that can be present with Alpha-1 antitrypsin include shortness of breath, chronic respiratory infections with or without mucus, low oxygen saturation levels, a large decrease in lung function in a small amount of time,
as well as others. Illnesses that can accompany Alpha-1 or be diagnosed instead of Alpha-1 include: chronic obstructive pulmonary disease, emphysema, asthma, and others. Those who smoke are more likely to show signs of Alpha-1 than those who don’t smoke with the illness. It is a genetic disease meaning that it runs in families. However, just because one sibling has it, doesn’t mean all siblings will have Alpha-1. Augmentation therapy given by infusion is
the treatment for Alpha-1; there is no cure. Inhalers, nebulizers and
supplemental oxygen can be prescribed to help combat symptoms like shortness of breath.

1. Alpha-1 Antitrypsin Deficiency Awareness Month (November) can bring all of us together who suffer with Alpha-1, which often leaves us isolated because it’s so rarely diagnosed and we may not know anyone else with it.

2. We are louder in numbers. The more people we have talking about Alpha-1, the better.

3. We can reach people who don’t know what Alpha-1 antitrypsin deficiency is, and make sure they receive the correct information, especially if they think they may have it.

4. We want the medical community to know we aren’t backing down!

5. We can let people know they aren’t alone in their symptoms.

Alpha-1 antitrypsin deficiency awareness is extremely
important no matter what day or month of the year it is. When we ban together, we are more likely to be heard. I encourage you to talk to others and tell your story. Maybe it will lead to someone being diagnosed who otherwise wouldn’t have been. 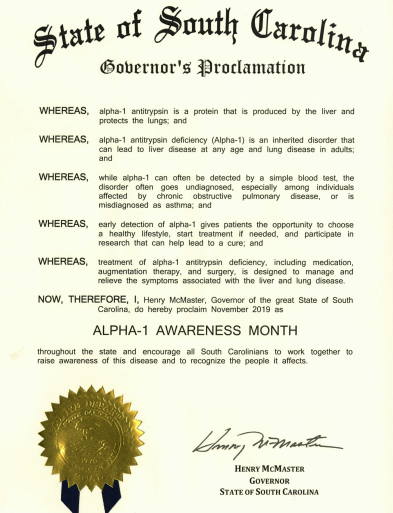