I do not know when our war with each other started, but I do know I was the one who started it. I think back to when I was a little girl and I remember putting my gymnastic uniform on before each practice, standing there criticizing you for the way you looked in it. I would suck in my stomach and pinch my thighs, promising myself I would do extra laps, double to crunches, and only eat half of the dinner my parents would pick me up for me on the way home.

As gymnastics started to fade out of my life and I started high school, I made new friends: friends who did not look or dress as I did. They were much more developed, looking like young women in just our freshman year, making me feel like a tall, thin boy next to them. I would get dressed each morning, putting on push-up bras that poked you and pinched you, but I was too bitter to care. And that was when I made a jar to save my money for breast implants to change you. Sure enough, the day I turned 18, I underwent a very painful surgery to have breast implants, not caring about how weak and tired this would make you. I was just focused on how I would finally get the breasts you “failed” to grow.

As I was waiting until my 18th birthday, I joined cross-country and I watched all the girls my age run in half my time. I immediately blamed this on the extra pounds you carried on our stomach and I began to starve you in hopes this would cut your time because less weight means less to slow you down, right? Running miles a day and with each mile I ran, the less food I replenished you with. Finally, during my training for my half-marathon, you broke down and I got my first broken foot. Instead of taking this as a wake-up call, I cursed you for being weak and promised I would train harder next year… which I did and, thankfully, you kept up that next summer.

When we got a little older, a relationship started and instead of being your advocate and your voice, I stayed quiet. I let men take advantage of you. I let them do things to you that you hated, that hurt you physically and emotionally. I was not strong enough to speak up for you. I let fear freeze me and in return, you got the worst of it.

By the time I hit college, I was so broken from so many things that instead of reaching out for help, I took my feelings out on you again. I starved you down to such a low weight that walking up stairs took your breath away. I made you stick your head in more toilets than I can count just to make sure not one piece of food passed your stomach. I ran until every part of you went numb and I would crawl into bed, and thankfully you would (barely) keep my heart beating.

After getting emergency help, I managed to get a healthy weight so I could get out of the hospital and treatment centers. You thought this was the beginning of a new relationship, but it did not take me but one year to get people no longer concerned, so I could starve you once again. This time, just low enough to give you the head spins when you stand up and classified as underweight on a BMI chart, but not so low where people would show concern.

Then, this year, you started to fight back. First, you gave my gallstones which required gallbladder removal. A few short months later, digestive issues started to occur, and you went back under so they could remove five inches of your rectum. Then, when that wasn’t enough, you shut down my large intestines which required me to go under again for an ileostomy bag. This surgery really hurt me. I cried a lot, hating the way you looked more than ever. Just when I thought I couldn’t handle any more, six months later, I got the news that my whole large intestines needed to be removed along with my appendix. And then, three short weeks after that, another surgery to sew my small intestines back to the remaining part of my rectum. I was shocked that you started to fight back. You scared me for the first time and made me question if you’d finally had enough and were waving the white flag.

So here we are, just one week shy of our 27th birthday (at time of writing), and we are still at war, the ugliest yet. I still hate how bloated you are. I hate how jiggly your arms look. I hate how your hair isn’t thicker, how your skin isn’t more tanned, how your waist isn’t smaller, how your thighs look thick in everything you put on and how round and fat your checks are. And here you are, fighting back, taking organs faster than I can even comprehend what this will mean for me and you going forward.

I do not know what started our war and honestly, I am not sure how to end it, but believe me, I want this battle to end more than anything because if it doesn’t, we will both lose and I think we can agree that is not the way either of us want this to end.

We have been through the worst part of hell, as we are clearly both really stubborn and good at fighting. Imagine what could happen if we started playing for the same team. 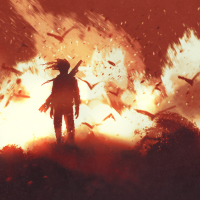