To the People Who Think I'm 'Exaggerating' My Celiac Disease

“She says she has celiac disease? How do you even know that’s for real? I bet she just likes the attention.”

“She’s not gonna get sick from someone using the same freakin’ kitchen utensils to make her food. Stop exaggerating.”

“Her whooole life revolves around this so-called ‘disease.’ How is that healthy?”

I have celiac disease, and these are just a few of the things I’ve had said about me and my chronic illness this year.

Before these comments rose up, I thought I’d faced about every challenge I could related to living with celiac disease. I’ve been hospitalized for malnutrition when going gluten-free initially wasn’t enough to heal me from intestinal damage. I’ve survived college (and once I graduate this coming May, grad school as well) while cooking all of my own gluten-free meals. I’ve created strong — romantic and otherwise — relationships. I’ve even learned how to eat gluten-free for $35 a week or less.

But the past year made it painfully obvious I hadn’t faced one obstacle that, unfortunately, is far more common than it should be: people being bullied or criticized because of their food allergies or celiac disease.

I’ve read plenty of stories in gluten-free support groups about families or friends who make rude remarks or believe “a little wheat can’t hurt.” Two years ago, I even shared a horrific news article on my blog’s Facebook page about how a teen with a dairy allergy died from bullies allegedly giving him cheese.

I can’t say how others who have been bullied or criticized for their dietary restrictions reacted. I know that in my particular situation, I wasn’t given the chance or in the proper mindset to respond to my own bout of critical comments as thoroughly and educationally as I would like. So, here’s what I wish I had said instead:

Having an invisible illness doesn’t make my illness any less real.

All through college, I feel extremely fortunate that I was not bullied for my celiac disease (though I did receive my fair share of ignorant comments). However, I think that partly resulted from the fact that I looked sick for a majority of my college experience. During the first semester of my freshman year, I was hospitalized for celiac complications, vitamin deficiencies and malnutrition, and my hallmates made a get-well poster to hang on my dorm room door. I was literally known around my small campus not only as the “gluten-free girl,” but also as the girl who was hospitalized freshman year.

Nowadays, I’m still thin and I’m obviously still eating gluten-free. However, I’m no longer wasting away, and with eating gluten-free being a common fad nowadays, I can understand how people might be able to look at me and not believe I’m sick.

But celiac disease is real and affects 1 percent of Americans. Invisible illnesses are real, and 96 percent of people who have an illness don’t “show” it. We shouldn’t have to wear our medical diagnoses on our sleeves in order for our condition to be believed. 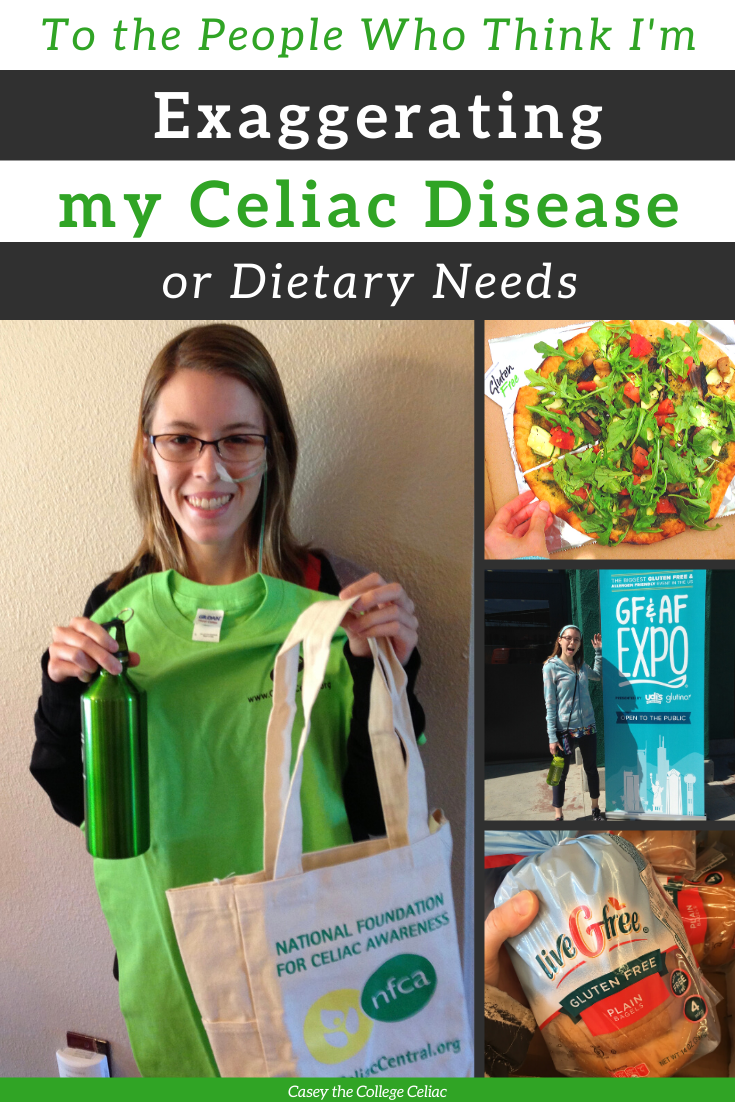 I wish I had explained more about how dangerous even a small amount of gluten exposure is for people with celiac disease.

Honestly, I could talk about the problem of cross-contact (or when gluten-free foods make contact with gluten-containing foods and are no longer safe for celiacs to eat; also often referred to as “cross-contamination”) for hoooours. Because here’s the thing. Being gluten-free is a whole lot easier nowadays than it used to be. Most “regular” (and by that, I mean non-health-food-only) grocery stores carry gluten-free options, and tons of new gluten-free products seem to be popping up every year. You can even find a gluten-free menu or a few gluten-free options at many chain restaurants.
However, not all “gluten-free” food items are safe for people with celiac disease. According to a 2015 poll, 1 in 5 people in the US avoid or lower the amount of gluten in their diet, even though only 1 percent of Americans have celiac disease. And as it has become more “popular” to be gluten-free (even without a medical reason to do so) more restaurants and products have been releasing options that are “gluten-friendly,” “gluten lite” or made with gluten-free ingredients but in a gluten-filled environment that promotes a high degree of cross-contact.

Now to someone who knows nothing about celiac disease, I get how “high maintenance” or “exaggerated” it may sound to say that I can’t eat the pumpkin pie filling out of the gluten-filled crust with no problems or eat with the same knife that was just used to cut into wheat bread. But it only takes 1/164th of an average slice of bread to create enough gluten to damage someone with celiac disease. So crumbs really can be dangerous when you’re living with celiac disease.

And I wish I had said that celiac disease isn’t my whole life, but is inevitably a big part of it.

How can it not be when celiac disease controls every single bite of food I put in my mouth, as well as where I can safely eat, what beauty products I feel comfortable using and even what my future children’s lives could look like?

Because of my “public” online presence, I do talk about celiac disease more than perhaps the average person who lives with it. But I’m OK with people wrongly assuming I’m only my disease if sharing my story helps even just one person feel less alone or more optimistic about their recent celiac diagnosis.

At the end of the day, I can’t control what anyone thinks of me or my diet.

However, if you’ve ever made comments like the ones listed at the beginning of my post, I hope this article will help you think of people’s dietary restrictions in a different light. And if you’ve ever been the target of such comments, know you’re not alone — and the three points I’ve mentioned might be a good starting place for how you respond in the future.

This story originally appeared on Casey the College Celiac.

Share
or  Copy Link
Link copied to clipboard.
Be first
153