It’s been almost two months since the world was upended due to the coronavirus (COVID-19), the new viral strain that can lead to serious and fatal health complications. I was told to start working from home, that I couldn’t go anywhere and that my son would be homeschooled with (you guessed it) me as his teacher. One day I was wandering around TJMaxx, the next I was locked down for who knows how long.

I planned out a daily schedule to try to ensure everything got done. However, with a 4-year-old and a 16-month-old at home, you can imagine how that has gone.

7 a.m. Planned: breakfast
Reality: My youngest eats breakfast while my 4-year-old refuses. Then suddenly mid-morning he starts screaming that he is hungry — like I forgot to feed him.

8-9 a.m. Planned: table work for “school”
Reality: So sometimes this one happens as it is supposed to. However, most of the time it’s me working with my 4-year-old while my youngest tries to steal his markers and write on his paper. He starts screaming and melting down (or joining in with her… I am not sure which is worse.)

9-10 a.m.  Planned: speech, physical therapy and occupational therapy activities (I may have forgot to mention my son has a disability)
Reality: This is usually when my boss suddenly schedules a same day department meeting, so I try to function on a conference call while the kids ride their trucks and scream throughout the house. This usually ends with someone crying.

10-11:30 a.m. Planned: pick up lunches at the school and then play outside with the kids
Reality: Struggle to get the kids in the car and drive over while my 4-year-old asks every 10 seconds “where are we now,” get home and freeze while they play outside because he insists it is not cold at all.

12:30-1 p.m. Planned: craft time
Reality: I show them one craft and try to coach them through it, while they say they want to do a different one.

1-2 p.m. Planned: youngest naps while my 4-year-old and I do something alone together and/or I work
Reality: Youngest does not nap.

2-4 p.m. Planned: husband wakes up (he works overnights) and I escape to the bedroom to do work
Reality: Kids open the door constantly, 4-year-old falls and hurts himself and of course only wants mom, husband comes in several times to hint that he wants me to be done.

6-7 p.m. Planned: cleaning
Reality: I clean while the kids follow me and undo everything I have already done.

You get the drift.

Naturally, this is hard for everyone. However, layer in a dash of post-traumatic stress disorder (PTSD), a pinch of depression and a whole cup of anxiety and it becomes nearly impossible.

I suffered with severe trauma for many years. Through those years I functioned by throwing myself into my academics — getting As, retaking exams I had already gotten 90s on and doing extracurriculars. This continued into my adult years when I took on project after project, and after finding success, continued to take on more, do more and fight to change the world.

Today I feel ineffective in every role that I have — as a stay at home counselor who struggles to reach out to her students who lack access, as a mom who is also trying to work, as a teacher for my son, as a physical/occupational/speech therapist for him, as a wife, as a human. Then forget about doing anything for myself. It is a hopeless, helpless feeling that is far too reminiscent of the feeling of going through trauma. I try to be a superhero. But today… I am not OK.

For more on parenting during quarantine, check out these stories from our community:

Share
or  Copy Link
Link copied to clipboard.
Be first
57 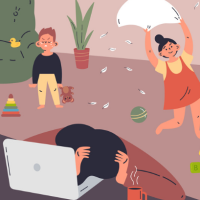