The Sleep Disorder That Makes Me Late Every Day

Groggy and barely half awake, I hear the faint chimes of my alarm clock ringing in the background of my dream. I scramble to find my phone and successfully slide my finger across the screen over the unlock button. I hit the “x” and the noise stops. I do this for the next hour in random intervals: 7:03 a.m., 7:08 a.m., 7:19 a.m., 7:29 a.m., 7:36 a.m. At 7:44 a.m., I hear the other alarm clock strategically placed on the counter in the kitchen. Limp legs sluggishly drag myself out of bed toward the noise as a tingly hand slaps the snooze. I inch myself back into my warm and inviting bed, and before I know it, it’s 9:30 a.m. I’m late for work. And the only thing I remember from the past two hours is the last few seconds of a dream that was never interrupted.

This morning routine quickly became my norm, while also becoming my own worst enemy. When I arrive to work an hour past my start time, I don’t just have to deal with the looks and judgments, I also have to push away the thoughts and feelings of shame and self-hate.

Why can’t I just wake up on time like a “normal” person?

After being consoled by my management, interrogated by HR, and chastised by my peers, I quickly realized that what I mistook as a poor acclimation to a new city, a new job, and overall, a new chapter in my life (on top of my borderline personality disorder) was actually a debilitating problem. After explaining my symptoms of excessive sleepiness, difficulty waking up, and 14-hour average sleep times, my family doctor referred me to a neurologist. After a few months of conversations, a pre-sleep apnea test, and an overnight sleep study, I was finally diagnosed with something I had never heard of — idiopathic hypersomnia. The punch line? No one knows exactly why it occurs and there’s no cure for it.

The engineer in me struggles internally with the answer “no one knows why it occurs” and the borderline personality disorder (BPD) in me just struggles. On top of naturally having to feel inferior to my engineering coworkers due to my gender and emotional disorders, now I’m conditioned to feel ashamed for having a sleep disorder, regardless of the logic to the latter (and really all of the above).

What Exactly Is Idiopathic Hypersomnia?

Idiopathic hypersomnia (IH) is usually uncommon, with one to two cases per 10,000 people, but is considered a chronic illness. It is best known for the amount of sleep a person can get, typically 12-14 hours or more, and still wake up feeling as if they never even went to bed. This also applies to naps, which is understatedly-so, very unfortunate. For myself, the major issue that is debilitating is waking up, regardless of the time. This makes not only work a challenge, but potentially any kind of activity or classes scheduled during the morning (and sometimes the evenings, too). There have been multiple times where I have missed farmer’s markets, girls’ nights, ballet studios, and workout classes, to name a few, due to my inability to wake up or how physically exhausted I am (not to forget the mental exhaustion from BPD as well!).

Fortunately, my engineering job is solely based on my own schedule, as I collect a lot of data and analyze it most of the time, but when it does involve others, I’m lucky enough to have some sort of magical gift of time management and prioritizing skills to do the job (and by luck, I mean having the practice drilled into me from four years of engineering school). Nonetheless, this disorder/career-ending diagnosis doesn’t make the job any less stressful.

Diving into some more stats and science, the average person takes 10 to 20 minutes to fall asleep; I can fall asleep in under three. Looking at the neurological side of things, it has been explained to me in this way:

Neurotransmitters in the brain release certain chemicals that help you wake up from sleep and continue to stay awake and alert throughout the day. However, it seems people with idiopathic hypersomnia do no secrete enough of this chemical to allow them to fully wake up, which is cause for the difficulty in wakefulness. This also attributes to the excessive daytime sleepiness, or EDS. Certain medication can help release that same chemical throughout the day to support alertness and wakefulness.

Other’s Perspectives on the Matter

I often get asked, “Why don’t you just set an alarm?” or “Have you tried going to bed early?” and I often reply with a plastered smile, “Most sleep hygiene techniques don’t work, but I try to do them anyway just for structure,” while my mind is really just rolling its eyes imagining this meme: 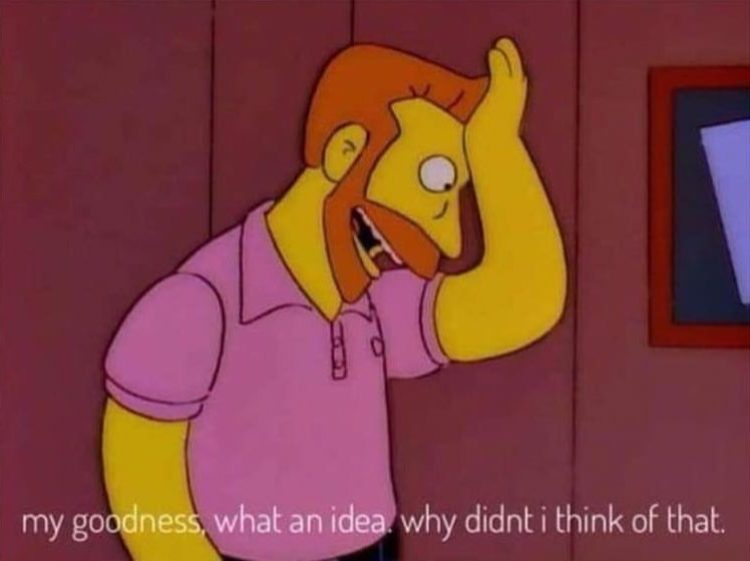 Then there’s the accusatory-type of “questions” such as, “That doesn’t sound like a real disorder, why don’t you get a second opinion?” or “You’re just going to accept that diagnosis without looking further into it? Don’t you want to know?” Yes, yes. I am going to accept that diagnosis just to spite you for having the audacity to question my medical disability and assume I am financially stable enough to just take sleep test after sleep test. Of course I want to know! I’m an engineer — my mind is literally wired to solve problems and understand how things work and why! Not being able to understand my own body, let alone my own mind, is frustrating enough without the implications that I’m just lazy and have a poor work ethic (in which I have also been accused, but those are rarely in the form of questions and are rather point-blank statements).

How Does This Affect My BPD?

When I wake up late, one of two things happen: I either feel extremely stressed as soon as I wake up and I rush through my morning routine to get to work, or I dissociate with the mix of exhaustion and grogginess and attempt to find something portable for breakfast. Most of the time, my boyfriend is generous enough to run to Starbucks for me and order my typical grande white chocolate mocha before he goes to work. Other times he feels too bad to wake me up because he sees how tired I am, which later creates other problems because 1) I’m late to work 2) I feel guilty for making him feel guilty and then we’re all just guilty 3) I get mad at him for waking me up and 4) I get mad at him for not waking me up.

This is usually when my BPD kicks in. By 8:30 a.m., I already feel like a bad girlfriend, a terrible employee, and overall a lazy and lethargic person. Regardless of knowing I have a sleep disorder, I always feel like I could be doing more — “maybe if I just try setting 20 more alarms, or maybe if I take another cold shower in the morning, or maybe if that one thing didn’t work the first five times, maybe it will the sixth time!” By 9:00 a.m., I’m walking into work with the paranoia and invasive thoughts of “everyone thinks I’m a failure because I’m never here on time.” Throughout the day my paranoia subsides, but then the exhaustion from it kicks in and after the first few yawns, I instantly think, “I bet everyone is annoyed that I come in tired even though I ‘sleep in’,” and after then, “I wonder if my boss wishes I would just quit so he wouldn’t have to deal with me.” And just like that, my paranoia is back and it’s only 10:15 a.m.!

Even though I follow all of the call-in procedures, FMLA records, and other company protocols related to attendance, I always feel like I’m on thin ice. To be honest, I’m definitely at a disadvantage. I make up my hours even though I’m not required to, and I still work more than 40 hours some weeks, but if I work one 36-hour week, I’m instantly not a good enough employee and HR threatens my pay and benefits. I could donate hours of my time to work without accepting overtime pay and it would still never make up for the fact that I come in later than everyone else in the office — and this drives me nuts. It doesn’t matter that my work is excellent or that my ideas are creative and innovative — I’m not there, and everyone knows.

To me, my career is everything, so when I believe there’s a threat against it, I get defensive and stand guard ready to attack and overcome. But what do you do when you’re that threat, and that threat can’t be overcome by mere defensive strategies, self-help books, or even modern medicine? You hate yourself, that’s what.

Can you relate? Let the author know in the comments below.

Photo by Sinitta Leunen on Unsplash

Share
or  Copy Link
Link copied to clipboard.
Be first
158