How Nature Saved My Life in Drug Addiction Recovery

Editor’s note: If you experience suicidal thoughts, the following post could be potentially triggering. You can contact the Crisis Text Line by texting “START” to 741-741.

My plane landed in Utah on a snowy night — an element I was not used to after spending my entire life in the humidity and mildness of Georgia. I leaned my forehead against the window of a cab, headed for a detox center. This was not a vacation or a move I had planned for – I was going to rehab. And it was cold.

I spent a few sweaty days in the detox center until I regained my appetite and it was time for me to move on to a treatment center. I woke up one morning knowing today was the day I would go to rehab, and I was filled with fear. Fear of the unknown seems to be the most powerful agent in my life to this date. I was wearing leggings and Vans – not exactly suitable for the feet of snow collecting outside, but that’s all I had. My Vans and my battered, stained-glass heart that only seemed to beat on good days. I called my dad to tell him I wasn’t going to rehab. I told him, “Detox was enough, I feel fine, totally cured! Please bring me back to Atlanta!” I was hiding in the office so as not to let any of the staff hear me, but my attempt was futile. My pathetic conversation seemed to catch the ear of a blonde-haired woman who worked there, who then invited me outside to smoke a cigarette. I walked outside with her as she told me not to go home. She told me her life story, how she hitch-hiked from South Carolina to Utah just to get sober and now she skis and hikes and loves her life. I scoffed. I assured her this wouldn’t work for me, but in my head I thought, “skiing does sound fun.” She told me I was making a mistake, that I needed to just get in the car to rehab and not think twice about it, and I hated her because I knew she was right. I looked around – it was a bright, clear morning. The mountains were so near me and I felt warmer in their presence. 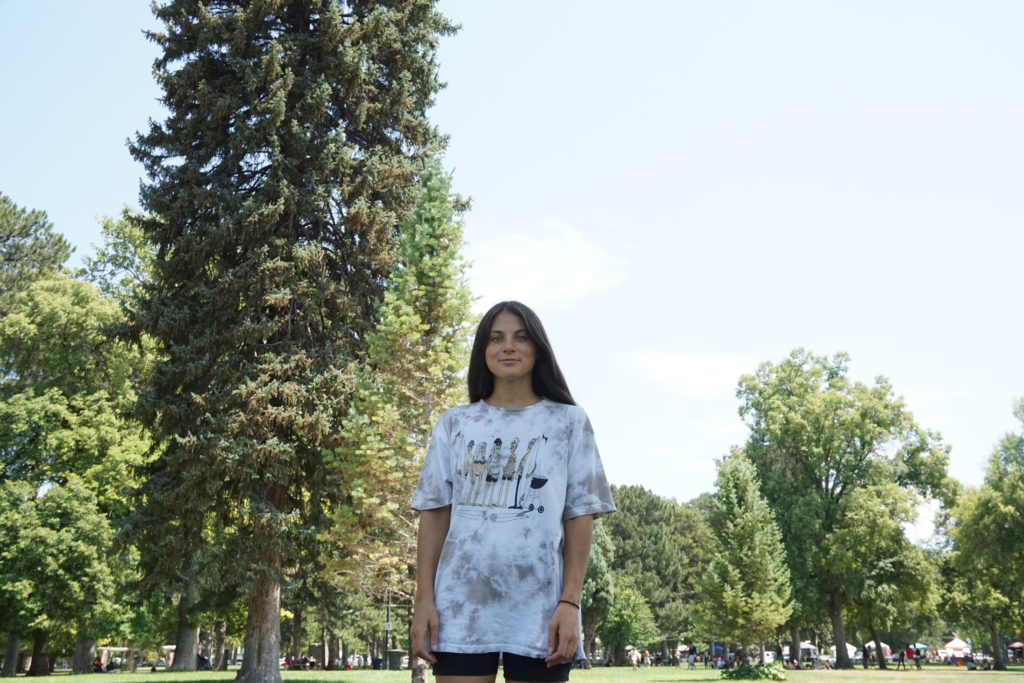 I got in the car. I went to rehab. I didn’t think twice. I spent months setting fire to the old parts of me that no longer worked and piecing together the parts of me that refused to go down without a fight. I nourished my body with good food and yoga and my soul with laughter and views of the mountains. In the shower every day, I would pray to forget the drug dealers’ numbers I had memorized. I would pray for my parents to sleep through the night. I would also pray they would send me a good jacket.

At a certain point in my recovery, I began to feel empowered. Regaining control of your life after years of helplessness can do that. I was given a second chance at life and I wanted to enjoy it. I began making a list of the things I wanted to do – the person I wanted to be. I wanted to ski. I wanted to rock climb.I wanted to see the Arches in Moab and build a fire on my own. I wanted to be responsible enough to take care of a dog. I wanted to support myself financially. So when I got out of rehab, I began. It’s as simple as that. I wanted to ski, so I bought a season pass. I rented boots and skis and prayed I wouldn’t get hurt. I french-fried and pizza-ed until I knew better. I finally got a good jacket!

To date, the best day of my life was when I skied my first black diamond. All of my friends had gone home for the holidays and I hit the slopes every day on my own, determined to hit a black diamond. I made this joke in my head about how I didn’t want to do blues anymore (“blues” is the street term for the opiates I used to do). It was Christmas day and the mountain was packed with powder. Somehow, I found the gall to just get on the lift – just like the day I got into the cab to go to rehab – without thinking too much about it. I faced the crest of the Wasatch mountain range and looked down at the path before me while I breathed into my chest. I suddenly remembered what anxiety felt like. Then I dropped into the steepest slope I’ve ever seen and focused all of my energy into my legs. I could feel versions of myself at every age of my life cheering me on in the wind. The air on my face told me I was alive for a reason, and I relished in the speed and the thrill of floating like a goddess on fresh powder. And then I fell. And lost a ski. And I laid under feet of compacted snow staring at a clear blue sky feeling my heart beating fast and strong.

I thought about the days I spent in the dark, taking pills and wondering about the easiest ways to kill myself. The basin was my temporary bed and for the first time, I didn’t feel cold. I skied the rest of the way down, falling a few more times, but I got back up after every tumble, and that’s what counts. Now I race my friends down that same run.

I decided I wanted to climb rocks, so I signed up for a membership at a local climbing gym. At first, it was painful. I had to say a solemn goodbye to manicures in exchange for a life of hardened, calloused, sometimes bleeding hands. My arms were constantly sore. Before then, I had spent my life trying to fit into the perfect Urban Outfitters model mold of a thin, emaciated body, which was somewhat easy when I was strung out on drugs. But when I began carrying the Earth in my hands, lifting my body and others hundreds of feet in the air, I grew muscles I didn’t even know I had. 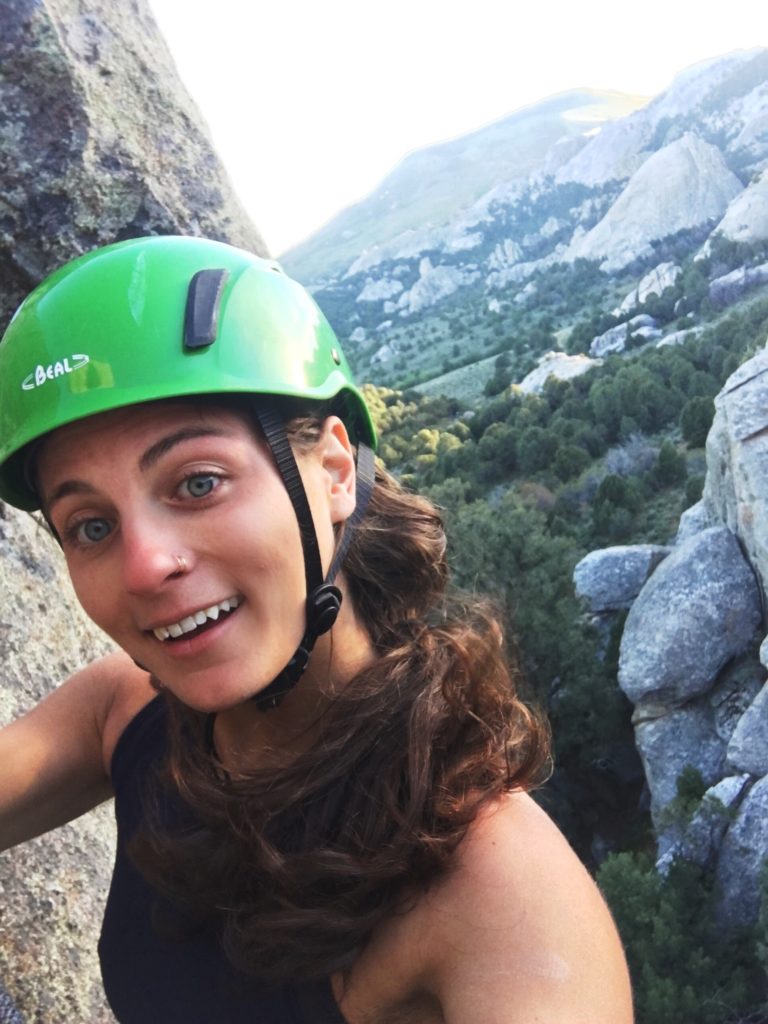 My body met my soul in strength and I felt myself becoming the person I always wanted to be. I remembered being young and beating the boys in push up competitions and soccer games, and I wondered at what point I stopped being Sporty Spice. The first time I lead climbed, I was overwhelmed by the feeling of supporting myself, feeling so naked and alone so high in the air. I’ve found that feeling of aloneness is the most important push in my life, and it pushed me to the top of a 5.9 lead climb. I stood surrounded by Wasatch peaks and screamed of joy as far as my lungs could manage. I have not been the same since.

I went to Moab and fell in love under the brightest full moon I’ve ever seen. I hiked miles to reach peaks I once only dreamed of. I grew out my hair and I got a dog. I spend my life chasing views and sunsets rather than superficial highs.

I recently ran into the girl who worked at that detox center, the one who convinced me to stay and we both recognized each other and hugged. I’m not sure if she knows the effect she had on my life, but she told me I looked well. She was so surprised to see me because, as she said, “I usually never see people from detox again, unless it’s an obituary.”

It’s important to mention that over the years of my drug use, I was not alone – the opioid epidemic has reached outrageous proportions in our country. More people died of opioid-related overdoses in 2015 than of AIDs at the height of the epidemic in 1995. According to the CDC, 91 people die every day in the U.S. from opioid overdoses (and this was a 2015 study). German Lopez writes, “the opioid epidemic was already the deadliest in American history in 2015… and is likely even worse so far in 2017” (Vox). The New York Times reports that “drug overdoses are now the leading cause of death among Americans under 50.” In other words, the opioid epidemic is the US’s most dangerous drug crisis in history, and is in desperate need of address.

It is also important for me to mention that I am not alone in my sobriety. Getting sober at 24 is not easy (at any age, really), but I am surrounded by other young people who have chosen to live the same way. For all of the statistics about drug abuse, there are stories like mine and other people I know who have overcome their addictions and grown into positive, successful members of society. I owe my sobriety to many factors – a supportive family, a gut-wrenching rock bottom, a wonderful treatment team, good role models in recovery, a 12-step program, just to name a few – but nature has given me a belief in something I could not find anywhere else. 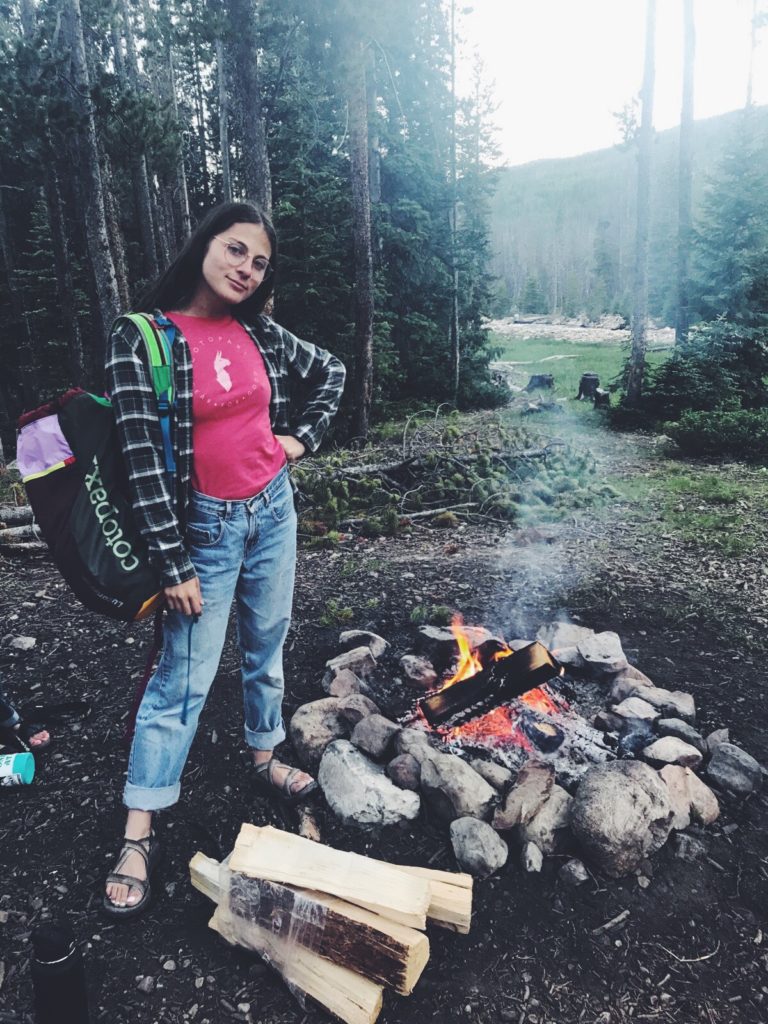 Nature is not just a vacation for me. It’s not just another Instagram post. It’s not something I do on the weekends. Nature saved my life and continues to do so every day. It embraced me and swallowed me when I felt I had no place in the world. It challenges me every day to climb a higher peak, to take the longer route home, to walk more, to sweat more, to do what I thought I could not. Because, after all, I am alive. This Earth – with its views, peaks, valleys, lakes, trees, flowers, dirt, snow, heat – is the medicine I have needed my entire life, and I owe my life to it.

Previously published on Pretty Good For A Girl

alexis-ahlzadeh
Want more of The Mighty?
You can find even more stories on our Home page. There, you’ll also find thoughts and questions by our community.
Take Me Home