How This Line From ‘Friends’ Helped Me Redefine My Mental Illness

Fans of the television series “Friends” will likely remember the episode when Monica’s mom hires her to cater an event. Riddled with anxiety, Monica is desperate to prove herself and not let her mom down by “pulling a Monica.” The phrase coined by Monica’s mom when she was younger, basically referred to situations in which Monica messed up. Mid-episode, the ever enlightened Phoebe Buffay, empowers Monica by suggesting she change what the phrase means to her. Together they decide that “pulling a Monica” will be equivalent to absolutely nailing it!

By the end of the episode, Monica succeeds in the catering event (with Phoebe by her side) and her mother expresses remorse for doubting her and ultimately congratulates her on a job well done. Phoebe confidently says, “ you could even say, she ‘pulled a Monica!’” But then when met with a look of confusions adds, “Oh she doesn’t know we changed it.”

Phoebe’s idea to flip the script and change the meaning of a once demeaning and demoralizing phrase is an idea that resonates with me on a personal level.

I didn’t get my anxiety and obsessive-compulsive disorder (OCD) diagnoses until I was 35 years old. Basically, I started having panic attacks and my primary care physician referred me to the behavioral health department. I remember bawling my eyes out in the psychiatrist’s office because I finally felt seen. Those clinical words felt so much better than all the adjectives I had collected to describe myself over the years. Nervous, sensitive, immature, ridiculous, weak. Some of these were words I heard spoken aloud by others, and others were ones I came up with myself. I believed them all to my core. It was just like Monica believing she was a total screw-up because of her mother’s bullying.

The doctor asked me what it was in particular that triggered the tears. I told her my entire life I have felt weak, like I was incapable of functioning at the level “normal” people do. She looked at me directly in the eyes and said, “On the contrary, you are quite strong. You’ve lived 35 years with mental illness — untreated — and look at all you’ve accomplished!”

I had never thought of it that way. I had always just seen myself as not like everyone else. I had more stomachaches. More dizzy spells. I cancelled more plans. I took more sick days. I cried more. Worried more. I thought dark thoughts and couldn’t get them out of my brain. I fixated on things. I washed my hands too much. I moved home from college. I left camp early. I quit soccer after, like, a week. I could go on, but you get the point, right? And here was this doctor telling me to flip the script and think of all I had done, because I was strong. She may as well have been telling me I “pulled a Monica.”

It took a little while for me to believe in this new version of myself. However, once it clicked, I began to apply that Phoebe Buffay philosophy to nearly all of those old adjectives. Yes, I was nervous, and my nerves kept me safe. Yes, I was sensitive. I was also sensitive to other people’s experiences and feelings — empathetic, if you will. Yes, I was immature. My immaturity often helped me connect with young people in a more authentic way than other adults, which definitely helped my teaching career.

Some of the words got retired. Truthfully, I think finally having the diagnoses helped me believe I was not ridiculous or weak. Then, the real work started and I proved how strong I really could be. Exposure therapy for fears, cognitive behavioral therapy to change my thought patterns, medication (with a rough trial and error period) for my OCD and lots of patience, determination and commitment. 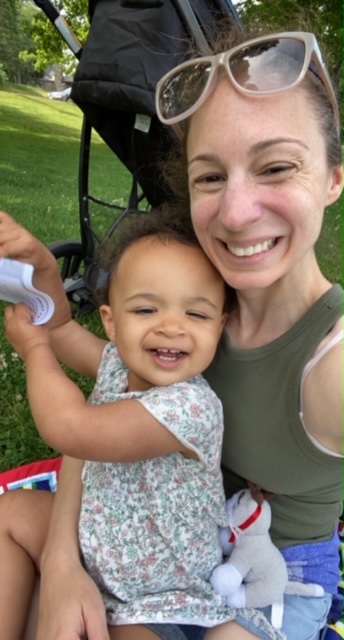 Former high school teacher turned stay-at-home mom. My daughter &amp; hubby are my world. I also love to sing, dance, read, write, eat, nap, and be outside when the weather is perfect.