We Asked 12 People With Bipolar Disorder What Treatment Is Like

“My experience with bipolar treatment is ongoing.”

2. It can be hard to find the right bipolar medication cocktail.

“Finding the right treatment has been a tough road … I’ve been hypomanic two times and extremely depressed and have done electroconvulsive therapy (ECT). After all these years, I’m finally taking the correct [medication] cocktail.”

3. Bipolar disorder medication may be a “catch-22.”

“Antidepressants worked well for me until I was hypomanic. I finally had a doctor who put me on a medication to treat bipolar disorder and an antidepressant, and it works really well for my moods. But I have a hard time getting things done since I’m no longer hypomanic … It’s a catch-22.”

4. Medication and therapy can work well together to treat bipolar disorder.

“I have done cognitive behavioral therapy (CBT) with a psychologist and have also done group CBT. It worked really well for me. I am also on medication.”

5. Electroconvulsive therapy (ECT) can be helpful in treating bipolar depression.

“I have treatment-resistant depression and am suicidal. I recently started ECT treatments, which seem to be helping me.” 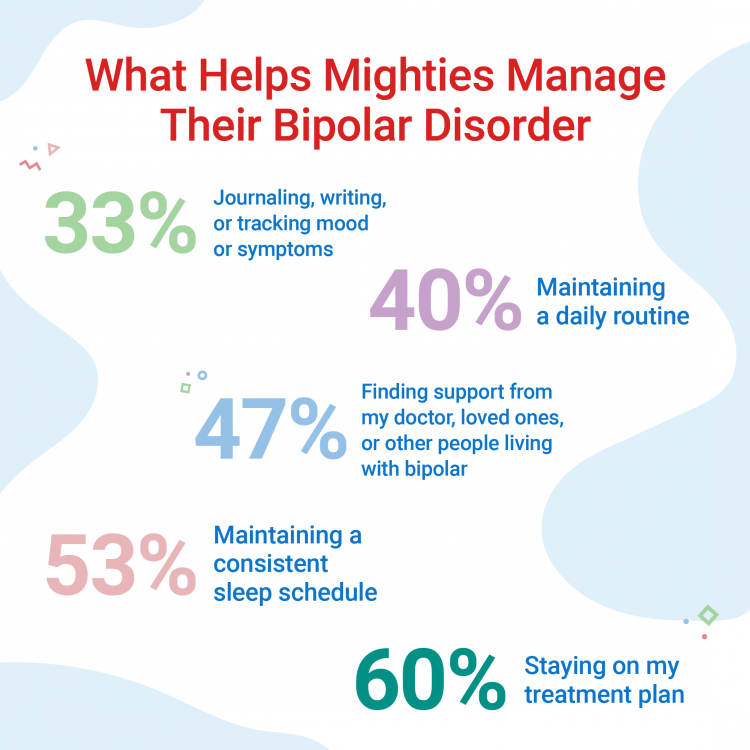 6. Professionals may not fully discuss treatment for bipolar disorder.

“Unfortunately, bipolar disorder isn’t like a health condition where one ‘treatment’ fits everybody … I am on medication for both bipolar disorder and PTSD, and I have a therapist. I also meditate and do breathing exercises, but that is still often not enough.”

8. Finding the right medications for bipolar disorder can impact your emotions.

“When the psychiatrist and I were trying to find the right cocktail of bipolar disorder medications, I was in a zombie-like state. Now that we’ve found what works for me, everything is great.”

“In my first year of bipolar disorder treatment, the psychiatrist seemed more interested in keeping me from gaining weight than in focusing on the medications that would stabilize my moods. I was on five different mood stabilizers in under a year.”

“I was finally prescribed medication to help with my depression, and it works for me. It helps with all my symptoms, and I have very few manic episodes now.”

11. Mania can disappear for months or even years with proper treatment.

“I take an antidepressant and a mood stabilizer, which works really well for me. I have been stable (no mania or depression) for 18 months. It still feels too good to be true.”

12. The right providers make all the difference in treating bipolar disorder.

“I have been extremely fortunate to have a very good psychiatrist and … wonderful psychologists. I don’t know what I would have done without them.”

If you’re living with bipolar disorder and want to connect with others with similar experiences, join our Bipolar 1 Support community or follow #BipolarQuestionOfTheWeek.

The Mighty Asks: what would you like others to know about your experience with bipolar disorder treatment or treatment for another disorder?

Lead photo by Priscilla Du Preez on Unsplash. Statistics graphic by The Mighty.

Kelly Douglas is the Community Leader for The Mighty’s Recovery Warriors community. She graduated from Cal Poly, San Luis Obispo in 2016 with a B.S. in Psychology and a minor in Law and Society and is excited to share her knowledge with others in recovery. Kelly is passionate about sharing her experiences with others through writing and is the also the Senior Editor for Unwritten, an online magazine dedicated to millennial life. Her work has also been featured on Her Campus, HelloGiggles, POPSUGAR, Project Wednesday, HerStory, Finding Bohemia, Thought Catalog, YourTango, Shape, ScreenRant, MSN and Yahoo!, as well as in the “Written By…” anthology. When she is not writing, editing, or supporting fellow Mighties in recovery, Kelly enjoys listening to music, watching true crime shows, and cuddling all the cats. Follow her on Instagram @kellychristine333 or on Twitter @kellywrites333.