I know! It sounds more ridiculous and fantastical than a Marvel movie. Our mental illnesses often feel more like a tragedy, perhaps a curse from the gods of a Greek tragedy than a superhero action tale with the obligatory happy ending.

But it wasn’t my idea. My previous therapist, who diagnosed me with borderline personality disorder (BPD) where others failed and in many ways saved my life, used to refer to my personality disorder as my superpower. I would look at him incredulously and ask if he needed some therapy also. I questioned whether he had been listening at all to my tales of often daily woe. But now, I think he was right; my disorder does give me special abilities that enrich not just how I think and see the world but the way I engage with the people around me.

I wonder if others in The Mighty community agree from their own experiences. I imagine there will be a significant number who would understandably strongly disagree. However, I think this reframing of our illnesses in a more positive light is a way to redress the horrible stigma associated with mental illnesses generally. It is well-known that the stigma around BPD, for instance, can particularly vilify those with the disorder and make us suffer even more. Think of this as an attempt to accentuate the positive based in truth while still acknowledging that many do not experience their mental illness as a superpower, far from it. Also, a note that I will be writing mainly from my BPD perspective, but I really hope it applies beyond just one disorder and can be applied to many mental illnesses.

So, what did my therapist mean by saying BPD is my superpower?

I believe my therapist meant that my great intensity of feeling, feeling most emotions intensely, means I am very passionate in my interests and relationships. When I love something, it is with all I have.

When I was a teenager, I used to fall in love with Sydney stage actresses, including a very young Cate Blanchett — not yet a two-time Academy Award winner — and organize big groups to see their performances. No one around me would be in doubt about who Cate was, nor her talent (and it turns out I was right, by the way, and you can see the photo of my teenage self idealizing her below). 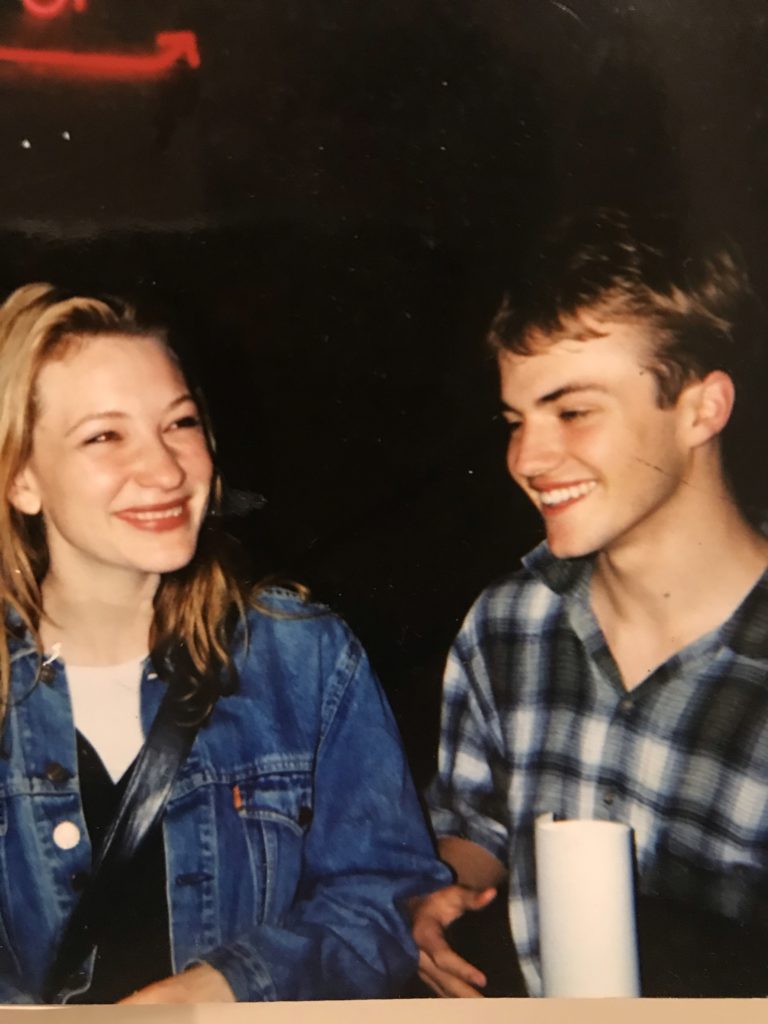 I also get fixated on certain movie directors, writers, tennis players or even places in the world. And I’m sure I’m not alone in the Mighty community in my fascination with true crime, the law and how the law treats mental illness. Lately, I’ve become particularly impassioned about breaking the stigma of mental illness by talking about it openly and honestly, and that is why I’m now writing for The Mighty. For example, I am determined as a man with a disorder that has been traditionally but erroneously thought of as female to have my voice heard.

I think, as a result of all this passion, it’s generally not boring to be in my presence and my conversations are not easily forgotten. I am frequently told I have no indoor voice because when I get passionate, my volume dial is nonexistent. This was particularly problematic recently when I was in a psychiatric hospital and we were discussing one rude and invalidating nurse. I simply can’t turn down the feeling in my voice.

The depth of feeling is often accompanied by a depth of thought. I often feel affected by an idea, philosophy or belief system on display, particularly in the creative arts. Just as we feel deeply, we also can think deeply. My grandmother used to frequently notice this state of deep thought and feeling and ask me what I was in a trance about. These trances continue to this day, as I just now went out our back door and stood under the awning, mesmerized by the heavy rain falling. All of these intense feelings and thoughts mean I’m generally not afraid to traverse confronting subjects or speak an uncomfortable truth, but try to speak such a truth in love. I don’t find it difficult to get to the heart of the matter, the crux of the argument.

The downside is that these high-stakes life and death feelings and thoughts can leave me feeling like I could burst, overwhelmed and exhausted. And I often overanalyze conversations and interactions if they haven’t gone well, and be troubled that I may have hurt someone. Small talk feels like a betrayal. Generally, there could be more light instead of so much shade and darkness, but these are all what fuels the superpower so I could not choose something safer, blander.

As alluded to above, my friendships are also full of profound feeling. Once a friend, I remain very close and loyal, and I seem generally incapable of low maintenance or superficial bonds. However, I do conform to the phenomenon of the borderline‘s “favorite person,” a very all-or-nothing version of a best friend, who you pour all your feeling, relational hopes and dreams into. It is so easy to fall into this, especially when you can see your great love being returned or even sometimes matched. But this relationship is usually idealized and overpowering as you place all your relationship eggs into the one basket of a person who is often unable to match your intensity and keep up for long.

I have recently found the secret is spreading your friendships as wide as you can, which means you can share your great depth of feeling among a number instead of an overwhelming one. And here we come to the cursed part of the superpower: romantic relationships are very tough. This is something many people wish wasn’t so, if only we could just be like other people. But we’re not! We frequently experience splitting, where we, as I call it, deify suddenly followed by “shittify” our partners. Behind this is polarized thinking, which gives us heightened sensitivity and reactivity. This self-fulfilling behavior can make our partners leave. And soon, the feeling of rejection quickly blows out into an abandonment that sends us spiraling right down to the deepest, darkest depths. I wish we had a superpower here to make this less excruciatingly painful. The solace is that this isn’t the experience for every person living with BPD, or for other illnesses in relationships, and many manage steady, lasting and loving unions.

4. An abundance of empathy.

This great depth of feeling also means my empathy is very developed. There are still some who argue that BPD is like narcissistic personality disorder, believing both disorders mean the person is devoid of empathy for others. Admittedly, they are both on the same DSM cluster. But the vast majority of people living with BPD whom I’ve met or done dialectical behavior therapy (DBT) with have an abundance, not a lack, of empathy. Certainly, my diagnosing therapist and my new psychiatrist have both said that my empathy for them and ability to see when they themselves are having a bad, overly tired day shows how kind I am. This empathy could have a number of sources, including a heightened sensitivity to the world around us and, also, experiencing highs and lows with such intensity can make us better able to imagine and appreciate others’ own emotional extremities.

It is important to acknowledge that the splitting from idealization to devaluation is a central part of the disorder, and I am far from immune to devaluing others, though usually my empathy for the person I’m angered by eventually saves the day. But, this is very difficult and can take days, weeks, months or even years to return to baseline and let go of the devaluation. This is something that therapy, especially dialectical behavior therapy, can improve with a willing mind even if it is very tough work. But the depth of the empathy many borderlines possess is super strength and often does not get the credit it deserves.

The final superpower I see my personality disorder giving me, and here I really think this applies to many mental illnesses, is the ability to think, feel and experience outside the box; the “misfit perspective.” Throughout my life, I have never really fit in; too city to be country, too “girly” to be a boy or man, too gay to be Christian, too Christian to be gay, and the clincher: too nice to be borderline (exact words said to me), as well as too typically female borderline in traits to be a “male borderline.” Of course, these are all labels and rather silly versions of each label, but still; I never could properly fit in the box, and I am certainly not unique among my borderline and other mentally ill friends who are placed on the margins of what is “normal” or average or acceptable. Specifically, I have a few borderline friends who are very moral and principled, who stand up for justice when others around them buckle. They simply will not compromise and refuse to conform. No doubt this nonconformity causes great distress and invalidation for those who don’t/can’t fit in but it also makes us more interesting people with more interesting characters.

If we were in a superhero movie for real, we would be the characters the audience would be drawn to; the characters who think and feel outside the box whose brave, daring actions would set the plot into motion. Truly, I believe we are the heroes. If I were to select one superhero, it would be Rogue from X-Men, who is so tactile sensitive that she absorbs the strength and very life-force of the person she touches: a superpower that is both equal measures a blessing and a curse.

Dedicated to My Psychiatrist and Abraham Lincoln

Finally, I would like to acknowledge my two sources of inspiration for this article. As mentioned, my psychiatrist in Sydney, where I once lived, was the first to describe my illness as my superpower and even though this used to rile me, I now publicly acknowledge that he was profoundly right.

Secondly, Joshua Wolf Shenk’s profound 2005 article “Lincoln’s Great Depression,” which later became a book “Lincoln’s Melancholy,” inspired me further to think that mental illness doesn’t have to be our handicap; in fact, it can help us succeed and make a lasting difference. Wolf Shenk reframes President Abraham Lincoln not merely as the president who won the war and freed the slaves, but as someone with a chronic, potentially fatal “melancholia” who used this sickness or illness to become one of the most formidable, revered and unforgettable U.S. presidents ever. He did this not in spite of his mental illness but because of it:

“Whatever greatness Lincoln achieved cannot be explained as a triumph over personal suffering. Rather, it must be accounted an outgrowth of the same system that produced that suffering. This is a story not of transformation but of integration. Lincoln didn’t do great work because he solved the problem of his melancholy; the problem of his melancholy was all the more fuel for the fire of his great work.”

Photo by Joshua Earle on Unsplash