A peer-reviewed academic journal called Personality and Individual Differences (PAID) published a research study in 2020 that understandably sparked criticism from thousands of researchers, especially from psychological scientists who specialize in borderline personality disorder (BPD), suicide and self-harm. They emphasized the article promotes stigma and may encourage a damaging narrative.

“Computational sexism,” “shameful,” “degrading” and “transphobic” are just a few of the words researchers are using to describe the article. The criticism is continuing to gain traction on multiple Twitter posts.

The article — originally titled, “Testing the Hot-Crazy Matrix: Borderline Personality Traits in Attractive Women and Wealthy Low Attractive Men are Relatively Favoured by the Opposite Sex” — aimed to analyze how partner preference changed when wealth and personality variables were adjusted in both short-term and long-term relationship contexts. 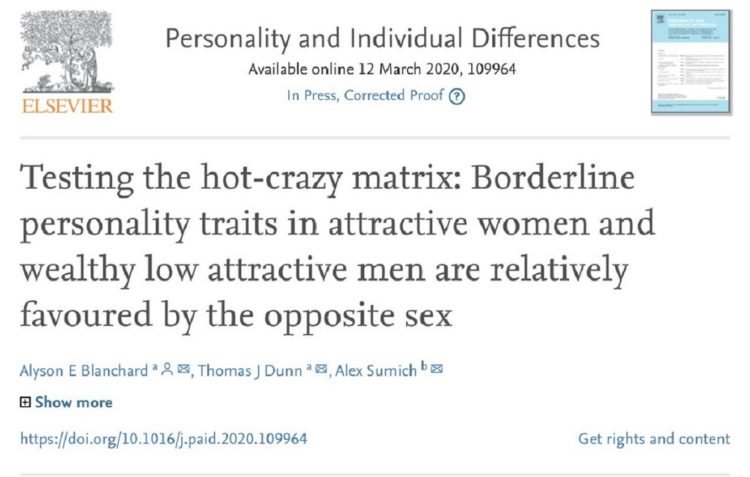 The authors claim, “…considering that traits such as sensation seeking and risk taking are perceived as exciting, a woman high in BPD traits could be initially appealing so long as she is ‘hot’ as compensation for anticipated negative consequences of this type of behaviour.” They then describe that men might ignore potential consequences of a relationship with someone who has these BPD traits when he wants to “take advantage of the woman” who is available.

Clinical science BPD researcher Dr. Jessica Peters said on her Twitter post, “This [article] should be retracted and republished without the pre-colon and an apology.” Fronted by Dr. Jessica Peters and Dr. Sara Masland, several researchers wrote letters to the editor to address this stigmatizing language.

After the letter, the journal omitted the pre-colon portion of the title, but to this day, they have not issued an apology to the BPD community. They also have not changed the title on other research dissemination websites, and the stigma within the article itself remains.

However, Peters emphasized the issue proceeds beyond the title. In our recent conversation, she explained:

“My concerns are also about how this [article] got through peer-review in the first place, and what that means about other concerning content that may have been missed. I was also disappointed by the journal’s failure to recognize and apologize for their role in this and to facilitate public discussion about potential steps to remedy this issue, both for this manuscript and moving forward.”

Indeed, a quick internet search revealed two of the authors are on the PAID editorial board. This example highlights the need to ensure a balanced process in which published articles do not contribute to stigma and harmful stereotypes of vulnerable populations.

More recently, Dr. Thomas Olino and his psychology lab from Temple University published important correspondence on the matter. Other than perpetuating multiple harmful biases towards this historically severely stigmatized group, they reported, “The work is primarily motivated by a popular culture meme, not by scientific inquiry.” They noted how it reflects poorly on the field to entertain the reader at the expense of people with BPD, and that has no place in scientific journals.

In what appeared to be an explanation, the first author of the article said they intended to describe why “dark triad” traits get “passed on” from an evolutionary perspective. According to the author, rather than label them as bad, “crazy” people have an underlying motive to get their DNA passed on and just go about it in their own individual way.

I understand well-intentioned people may make mistakes, but from the perspective of someone with BPD who also studies psychology, I do not think the article is ameliorated by this argument. If anything, I felt even worse. I remain questionable of the “scientific” value, the methodology and the interpretation of the behaviors and results.

First, the article assumes people with BPD want children as part of their underlying motive. Second, it assumes someone is heterosexual. And these are only two examples.

Another researcher, Dr. Sarah Victor, highlighted these methodological problems in her recent detailed Twitter thread, including the lack of citations to support their interpretations and the contradictions in their logic. Victor also pointed out, “Not only is the paper still published, but it’s part of a special issue titled ‘Celebrating 40th anniversary of the journal in 2020.’ If this is what you’re celebrating, PAID, then I guess thanks for showing your true colors?”

This said, in addition to the technical problems, intentions do not necessarily negate ethical guidelines in research and the negative impact. Especially when research reflects ableism and sexism, it has real-world consequences.

1. I felt terribly objectified by this article, as if I was reduced to an object of individual sexual pleasure and gratification, who is only as good as my potentially “attractive” body parts.

2. BPD was used interchangeably with being “crazy” in this study. The article quotes that BPD was used as a “proxy” for a “crazy dimension.”

3. The authors predicted that men prefer “hot” women with BPD traits “for the short term,” reinforcing the idea in our minds that we are unlovable for the long-term.

4. Women with BPD who lack self-esteem may internalize the results and view themselves as the “least desirable” type of partner.

This study prompted me to doubt my worth and ability to maintain a long-term relationship. Additionally, I was conflicted with the idea that I am the “last choice” partner if someone perceives me as “too ugly” to “compensate” for my mental illness. Ultimately, I cried and felt unlovable.

My friends with BPD had similar reactions. One of them did not want to be named in this article, but they stated, “I stared at myself in the mirror and wondered if I was attractive enough. And I hated everything I saw. I thought I could try to calculate it [the hot-crazy rating].”

BPD is a multifaceted condition that falls into five areas of functioning, including emotion, behavior, interpersonal relationships, thoughts and identity/sense of self. People with BPD struggle with emotion dysregulation and tend to experience intense emotional reactivity for long periods of time, with a slow return to a stable emotional baseline. Just a few of the main symptoms are chronic emptiness, hourly mood-swings (e.g., intense anger to idealization to anxiety, all within a few hours), recurring self-injury, suicidal ideation and impulsivity. Other symptoms include transient stress-induced dissociation and paranoid ideation (e.g., thinking someone is plotting to abandon them).

In fact, one report revealed BPD stigma was among the most common “crisis trigger,” and that it impacted confidence and self-esteem. BPD has a high suicide rate, with one review estimating up to 85% of people with BPD attempt suicide, often multiple times.

Those of us in the BPD community deserve respect and care, especially considering the potential detrimental impact on both people with BPD and public perception. Thank you to the researchers who continue to fight on behalf of the BPD community. Currently, the clinical psychology researchers are planning to take further action by refusing to publish or review for PAID and by writing formal commentary to the publishing company known as Elsevier.

All quotes and names were used with permission.

I am a psychology MA student, research coordinator, BPD support group facilitator, and part of a specialized SCN Program here at The Mighty where I write select paid pitches. I focus broadly on emotion regulation, BPD, accessible care, and health related issues (e.g., disease, disability, and chronic illness). I facilitate various live events/webinars for The Mighty and have gotten involved in ways I couldn’t imagine. I believe these stories will shape the outlook and discussions on a broader level and contribute to social change. Diagnosed with and write about: borderline personality disorder, major depressive disorder, and persistent depressive disorder/dysthymia, Amelogenesis Imperfecta, auditory processing disorder, POTS, fibromyalgia, Sjögren’s syndrome, some hearing loss, and platelet storage pool disease. Views are my own.

kellyannnnavarre
Want more of The Mighty?
You can find even more stories on our Home page. There, you’ll also find thoughts and questions by our community.
Take Me Home