3 Movies to Describe Our Lives With Epilepsy and Special Needs

The other night my husband and I were discussing movies we need to watch as soon as we complete our fast approaching, second “Game of Thrones” re-watch. At one point he mentioned “Rambo,” to which I replied “I’ve never seen it, is that the one where Arnold Schwarzenegger is a machine?” I’m pretty sure I saw a tear roll down his cheek as he silently shook his head in disappointment over my movie knowledge shortcomings.

To make it up to him I suggested, “Let’s make a list of all our favorite movies, and then we can watch them together this winter!”

I started working on my movie list, just my general favorites, and as I was doing that a question popped into my head: Which movies would I say describe (or at least help describe) our lives? Our lives since our daughter Julia was born. Our lives with a child who has epilepsy and global developmental delays, and whom we love more than anything. Are there any movies I could recommend to someone who wanted to understand us better?  Could Hollywood help us in this ongoing quest to be better understood?

The answer is yes. There are three. 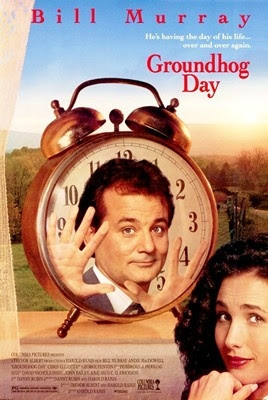 Murray plays Phil Connors, an arrogant Pittsburgh TV weatherman who, during an assignment covering the annual Groundhog Day event in Punxsutawney, Pennsylvania, finds himself in a time loop, repeating the same day again and again. After indulging in hedonism and attempting suicide numerous times, he begins to re-examine his life and priorities.

Well, when you have a child with significant developmental delays, time slows down.

What is often accomplished by typically developing kiddos in weeks or months can be years in the making, if ever, for our kids. Development at this pace can at times feel a little like life is on repeat – the same day over and over and over again.

But it’s not a bad thing – and that’s one part of the movie I love and connect with: the main character, Phil, is reliving the same day over and over again (I just read on Wikipedia it was probably 30-40 years he stayed in this one day), but he’s becoming a better person from it. What he first thought was a curse, he eventually realized was a blessing. And while I’ve never thought of Julia as a curse, I think the lesson Phil learned still applies: we’ve learned with every day how blessed we are by Julia. And as a result of her unique pace of development, we’ve also learned to slow down, to focus in, to see the details that can get missed when life is zooming by at “normal” speed. I think we’ve learned to appreciate small change and recognize that small is still significant and should not be taken for granted.

My favorite part of the movie in terms of how it relates to us comes at the end when after countless repeats of the same day, waking up to the same Sonny and Cher song, Phil finally wakes up to a new day, the next day, but the song playing on the radio alarm clock is the same song it has been for all the days prior. So you could initially miss the fact that something is different except that you have heard the repeated line so many times your ears are tuned in perfectly for those repeated words and you instantly pick up on the fact that you are hearing a different part of the song. This is how it feels sometimes when Julia does something new – you could miss it if you aren’t very tuned it. You could miss it if you are looking for something bigger. You might think this thing is the same as the before thing unless you are so familiar with the before thing that you know it forwards and backwards and inside out. And when you know something that well, you can’t help but notice when the littlest shift occurs. And it might not seem like much to someone else – someone who thinks change means switching to a new song. But no, it’s not a new song. It’s not going to be a new song, and it’s definitely not going to be a new album or artist or genre. It’s the same song, our song, but new lines – and oh how sweet those new lines can sound! 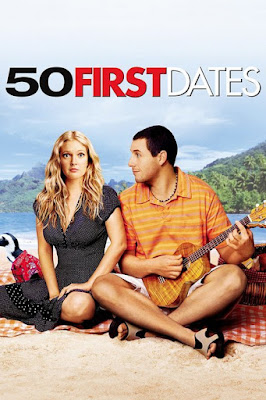 A Hawaiian island playboy has to use his imagination to win over the girl of his dreams when he discovers she has no short-term memory. Every night he is erased from her memory so he has to make her fall in love with him all over again the next day…and the next… and the next!

Julia has a very rare type of epilepsy called Electrical Status Epilepticus during Sleep (ESES) – this means that while she is sleeping her brain goes into a long continuous seizure. This is a non-convulsive type of seizure; her body looks as though it is peacefully sleeping, but inside her brain is actively seizing. Because this is so rare there isn’t a ton known about its full impact on the brain’s functioning – but needless to say when 95 percent of your sleep is a seizure, there is an impact.

When we first got the diagnosis I thought of this movie “50 First Dates” and how the main character, Lucy, has a form of amnesia that causes her to wake up each day thinking it is the same day. Sort of the opposite of Groundhog Day where the actual day itself is repeating and Bill Murray’s character is the only one aware of it, in this movie time is passing normally for everyone except Lucy, who wakes up every morning and is “reset” back to the same day. I wondered if this is what it is like for Julia with her sleep seizures. She lives a full, active day with us, but when she goes to sleep at night her brain may not retain what she learned and it can be lost. This is not scientific or medically grounded; it’s just how I think about it, and fuels some of the questions I ask myself: How much is she able to retain? And how much is lost? In the movie you see over time that despite the amnesia not being cured, Lucy is on a deeper level retaining new information. And I know Julia is also learning and retaining – but not in the way we do – because her brain has so much to deal with at night.

The other part of this movie that I love so much is what the rest of the characters do to support Lucy and care for her. Lucy’s dad, brother and neighbors work hard every morning to keep her from being traumatized by her amnesia. They go to great lengths to protect her from what they fear will hurt her. And then Adam Sandler’s character enters the story and he falls in love with Lucy before knowing about her condition and he quickly joins the rest of the team in doing whatever it takes to help her and be in her life because she is so worth it. They don’t question it – they don’t complain that it’s too much work – they just love her, and so they do what she needs.

This is how I feel about Julia. There is no question – we just do what needs to be done to be with her and love her and make life work for her as best as possible. It’s not a martyr complex, I’m not seeking praise for it – it’s just what we do because we love her. In the movie it’s just what they do – I guess because they feel that repeating one day with the person you love is worth more than a lifetime of days without them – so that’s what you do. 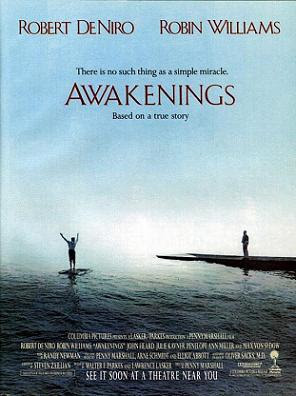 The story of a doctor’s extraordinary work in the sixties with a group of catatonic patients he finds languishing in a Bronx hospital. Speculating that their rigidity may be akin to an extreme form of Parkinsonism, he seeks permission from his skeptical superiors to treat them with L-dopa, a drug that was used to treat Parkinson’s disease at the time.

We have been fighting epilepsy since Julia was 7 months old. The first type was a devastating form called infantile spasms (IS). IS basically stole her from us for 18 months. Julia was nearly in a vegetative state because of the effect this type of seizure has on the brain. When we finally found a medicine that worked for her, we experienced our own awakening – development that had been lost started to return. It felt like she was waking up and rejoining us. Just like in the movie, we had her back! And for a while we thought we had her back for good. But then we started to lose parts of her again, this time to ESES. We fought back again and found another drug. But even that has now started to wear off; the ESES is coming back. And while we will do everything in our power not to lose her again, losing her to epilepsy is something I think about and fear. Like in the movie, medication can sometimes only work for so long and then what? Will our precious love be reclaimed by epilepsy? I pray this isn’t the case, but it is a real fear.

I saw this movie long before I had Julia, long before I had heard of forms of epilepsy that rob your child of his or her development – but the movie always stuck with me. It was like I was meant to have it in my head before all of this happened – maybe as a lesson or reminder to appreciate what we have while we have it and to celebrate every moment we are given – because in truth all our moments are indeed numbered.

So that’s it. My life movie list. I hope you will consider watching these movies if you haven’t seen them already. I think they are all pretty great! Or maybe watch them again with my perspective in mind if you are so inclined. And please, share with me some of the movies you feel help explain your own life… I’d love that!

Oh, one last but crucial thing I have to say about this list as a whole: two out of the three movies I picked are comedies. That in and of itself is important in trying to explain us. Our lives are more comedy than tragedy. More joy than sadness. More laughter than tears. We spend more time enjoying the journey than fretting over it – and even in our moments of sorrow we know we have so many reasons to smile. Not a bad plot line in my humble  opinion!

Laurie Arnold is Julia’s mom. She is also a wife and marriage and family therapist. She writes I’m Julia’s Mom: Bragging, boasting, ranting and raving about life with the fabulous Jules. In her spare time she watches HGTV and drives her husband crazy by repeatedly rearranging their furniture. You can find I’m Julia’s Mom on Facebook too.