Though the following post isn’t about eating disorders, if you life with an eating disorder, some elements could potentially be triggering. You can contact the Crisis Text Line By Texting “NEDA” to 741741.

If you or a loved one is affected by addiction, the following post could be triggering. You can contact SAMHSA’s hotline at 1-800-662-4357.

My life looks very different than it did three years ago. Back then, I was busy working in a startup. I was working excessive hours, coping by the skin of my teeth, anxious, and drinking a bit too much in order to try to let off steam. My life was unsustainable.

We don’t identify workaholism as an addiction, but now, I’d certainly say that yes, it is a problem. It’s because it’s so acceptable as an excessive lifestyle choice. But speaking from experience, I was operating out of fear. It may be being in the “never good enough” club and feeling like your future is hinged on nailing something momentous in the immediate future to get long-term results. It’s not money that drives this feeling — mine wasn’t a material goal. I wanted the career prestige of working on something I knew was a gap in the market and making my mark with my design abilities. In short, your ego may be entangled in something if it’s becoming hard to take regular breaks and do the work at a healthy pace for you.

I crashed and burned. It was classic burnout, but took me about 18 months to recover. I’m a bit embarrassed to admit that — but that’s my reality. I was in a state of heartache. I’d had to exit the startup pretty sharply. The company was a dating app company, so there was some pain in acknowledging other people’s success stories from it. It wasn’t just random couples matching through an algorithm but also people I knew dating and eventually getting engaged or even having babies. I was congratulating my close friends when I felt washed out by the process that had made this startup a success. The heartache was rough. For me, it was harder than some previous breakups because it wasn’t my choice. I felt totally exhausted.

The next stage for me was unanticipated. I had acid reflux completely out of the blue. It was uncomfortable, and it prevented me from eating food at my usual pace. Fast-forward to a few weeks later, and I’d rapidly developed an intolerance to food. I couldn’t hold it in without being sick, and liquids were becoming an issue as well. Thankfully, when I was struggling to drink fluids, I was admitted to hospital. It had taken three attempts to convince them that something serious was going on. I got a camera test to view what was happening internally in my stomach. Then, I heard the words I wasn’t expecting: “Rachael, you have a tumor in your esophagus.”

To say I felt incredulous about my diagnosis would be putting it lightly. It took time for me to process the news. In the meantime, my physical health changed. I was put on a milk-based diet with a feeding tube. At first, it was a nasal tube, but then it was a more comfortable option inserted into my intestine.

The whirlwind of finding out I had a rare cancer for my age group was a lot to take on. Esophageal cancer is usually associated with men as well as with people who smoke or drink. It was the wake-up call I needed for my burnout. I had some big issues with unresolved anger and some bitterness towards having to leave the business. Cancer brought about the mother of all wake-up calls. It showed me that life is precious, I’m not invincible, and my body might react to stress in ways I don’t fully understand. 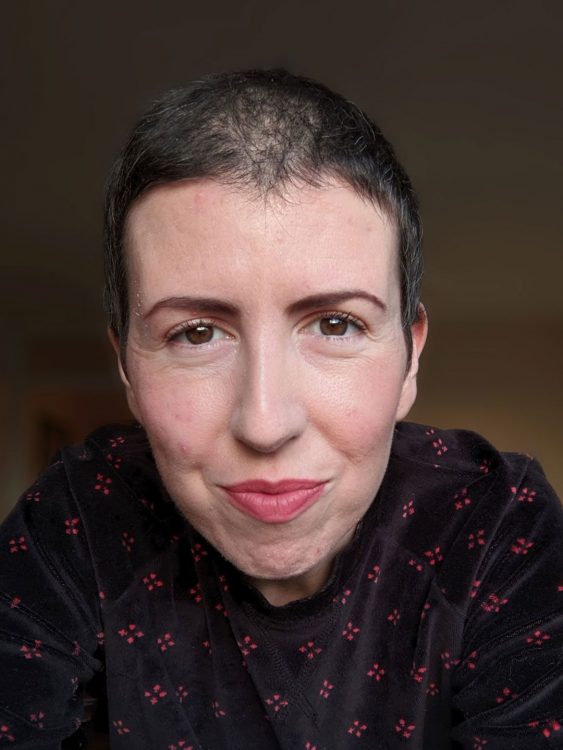 These days, life is different from when I was so busy. I’m over the moon to say that I’m in remission. Thankfully, my cancer was treatable through chemo and surgery. Because I’ve had 50% of my stomach removed and reshaped to form a new esophagus, I don’t experience hunger in the usual way. My swallowing is also different now. I have to have more liquidized foods and softer textures, which means I’m on a whole new level of friendship with smoothies and my blender.

I’m also a lot more content. It may not fully make sense when much feels like it’s been taken away — but that’s the honest truth. I’m happy to be alive — alive and able to taste and eat foods even if they are sometimes puréed. Once I started only taking food via a feeding tube, I realized that being able to regain a sense of normalcy isn’t a given, but now, it’s something for which I’m immensely grateful.

Going to my “rock bottom” and then excavating some levels below that gives me a sense of confidence and resilience like nothing else has. I’m grateful for this whole messy saga, and I know I have a purpose: to help empower other people to overcome tough times. It’s not just a trite sentiment — I’ve lived through heartache and my physical health being tested. We all need reminders that hope is possible and powerful in overcoming our challenges together.

Hi my name's Rachael and I'm a recovering workaholic. I've hustled hard, taken risks and swung precariously high on the career ladder. Some of those upper rungs didn't bear my weight so well. I had burnout followed by oesophagus cancer. I now pleased to say I'm fully well and tell other people's with overcoming stories here: www.calloncourage.com/podcast

rachael122897
Want more of The Mighty?
You can find even more stories on our Home page. There, you’ll also find thoughts and questions by our community.
Take Me Home