I Got Cancer Instead of a Baby, and It Changed Me

“Let’s have another!” For quite a while this had been a casual remark my husband and I exchanged with each other on days when our two small children were being particularly hard work, or life as a family of four seemed less idyllic than we had imagined. It was accompanied with an eye-roll, or maybe a laugh/cry emoji on Whatsapp. What we really meant was: No frickin’ way we’re having another child.

Until we, or more precisely I, didn’t mean that at all. And although we kept bringing it up to lighten the mood when the children were arguing in the back of the car during a long drive, or any other time we seemed to be clutching desperately for the lowest rungs of the parenting ladder; even if the joke never grew old, the initial feeling did. I really wanted another.

Our kids were then 4 and 6 and daily life felt more settled. While my husband saw this as a positive (think more date nights, easier long-haul flights, holidays that might actually be deserving of the name), well, I was thinking, It seems like the right time to have another. 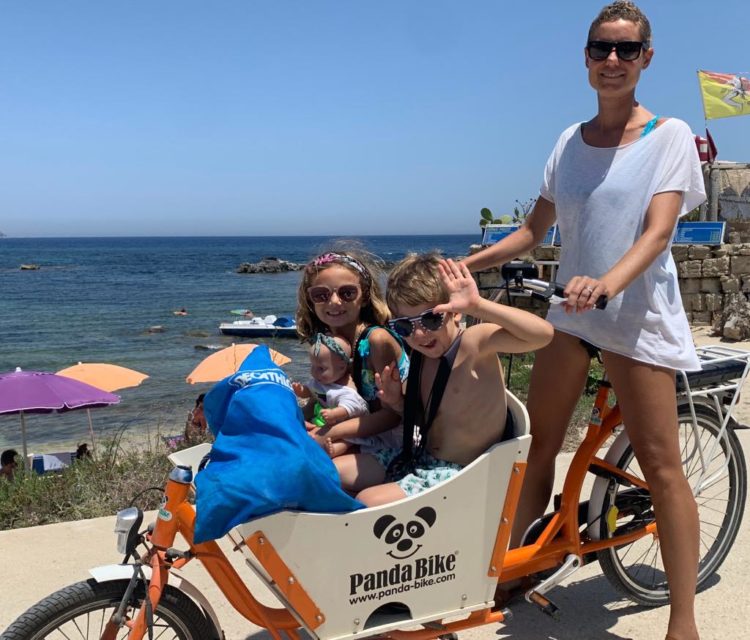 We agonized over it for a while, and it came down to the inescapable fact that I wanted a bigger family and it would have hurt me a lot more to give this up, than it would hurt him to go through with it. It was agreed then, in a very matter of fact way, which included promises on both our parts and ways we were going to do things differently in order to stay a little more sane and connected this time.

We’re having another! And the refrain on tough days became, “Well, just you wait until we have three!” which inevitably made him sigh and me shudder with glee. I’ve always appreciated a bit of a struggle I guess.

Now I realize we were in such a privileged position. Up until that point, life had treated us fairly well. My husband had worked his way to a job that he loved, and that could support us. We had lived in Europe, Asia, the U.S. and recently moved again to the Middle East. After staying home with my children, which I had wanted, I had found work, too. Our life had more or less gone to plan, even when the plan itself was kind of shaky and improbable. And we could have, at that point, just gotten on with it and most probably made another baby. Our first was an IVF baby and we were well aware of the heartache of infertility and loss, but our second had arrived naturally and we saw no reason why a third would not follow the same pattern.

I am and forever will be so, so grateful for my two wonderful children. But the fact is that I love children and I wanted more. Selfishly, of course, but also so fiercely. It’s an instinct and something you feel inside of you so deeply, you can’t even give it a name.

Instead of a third baby, we got cancer. Or I did. All the months I was wondering whether I might be pregnant — interpreting the tiredness, aches and pains, tummy cramps as maybe, possibly, early signs of pregnancy – my tumor was growing bigger and bigger until it was four inches in diameter just before I was diagnosed with non-Hodgkin’s lymphoma in November 2018. I was 36 years old.

I find it ironic that while the baby was not growing, the lump was. Or rather, that instead of a baby growing I had a lump of another type of cell inside me, growing and multiplying much in the same way as an embryo (to a non-scientist like me, at least). It is horrifying and depressing to think about those months when I was waiting for a baby to come but my body had a whole other, more sobering plan.

After diagnosis, I went through six rounds of chemotherapy and three weeks of radiotherapy. It was only four months of treatment, but each day felt like slow, aching steps to a finishing line that looked more like a mirage than a fixed point. I lost all of my hair, eyebrows and lashes. I felt desperately ill, but I kept my hopes up. My last scan in March 2019 confirmed that I am now in remission, which means the cancer is gone. For now at least.

It also appears I may be going into early menopause. I would like to be able to say I was never told this could happen, but the doctors did warn me there was a chance I could be infertile after chemotherapy. They did say that if I wanted more children I should freeze my eggs. I can claim I didn’t realize this also meant early menopause, but I did know about the infertile part. At the time, we didn’t think IVF would be something we’d be willing to do again in the future. Plus we needed to get the chemo show on the road, ASAP. My lump as already large, and growing fast.

And now, I am struggling with the fact I will probably not be having another child.

The reason this has been so tough is this: I am also, in parallel, super grateful that I’m even alive. I’m grateful I have two healthy children already. I love my life and I feel content and at peace in so many other ways. Getting cancer was never in my life-plan, but ultimately it has changed me in so many ways. While I don’t believe things like this happen for a reason, or that getting cancer and getting better was any of my own doing, I do believe that they are a wake-up call. For me, cancer was and continues to be a reminder that I can control very little in life, and that equally I need to stop fearing those few things that I do have a say in. It’s a daily nudge to be open and vulnerable to life (instead of acting like life is hostile and petrifying), to focus on what really matters, and stop feeling like I am never enough (thin enough, smart enough, funny enough, patient enough, sociable enough), and start feeling like I am the best me there is in the world right now.

Because everyone expects, wants and needs me to be grateful right now, I feel like my infertility grief just cannot be spoken. And this makes me feel incredibly isolated and alone. I feel like I need to keep this ridiculously indulgent first-world problem to myself, because who is going to empathize with me on this right now? I’m alive, right? That is what matters. And yet, I now know that it is very possible to love and live life fully and yet be so deeply sad over one thing. To be thankful for every single day, and yet mourn the baby I will never have.

I also know I will let this go, at some point. I know I will one day feel like my family is complete. I know that all I need is time.

But like any mother out there who has a clear picture of everything a bigger family brings, and desperately wants all those things, I don’t need to dig too deep within myself to know that there will always be a tiny (pea-sized) space in my heart for my third child.

I'm a mother of two, educator and lymphoma survivor. Cancer has rocked my world, in good and bad ways. I love coffee and travel and overthinking parenting and education. I live in Dubai, UAE

franlib
Want more of The Mighty?
You can find even more stories on our Home page. There, you’ll also find thoughts and questions by our community.
Take Me Home