I took a break this morning between dropping off Tessa, my daughter, at school and an appointment for myself. I stopped at my favorite little coffee shop and waited for my latte so I could go sit in the corner and return emails.

As I waited, a woman approached me. “That’s a sweet sticker you have there,” she said. Confused by what she was referring to and it took me a moment to remember Tessa placed this sticker near the bottom of my shirt this morning. I smiled, “Oh! Thank you. I forgot my daughter put it there this morning. She was putting these stickers on everything today.” 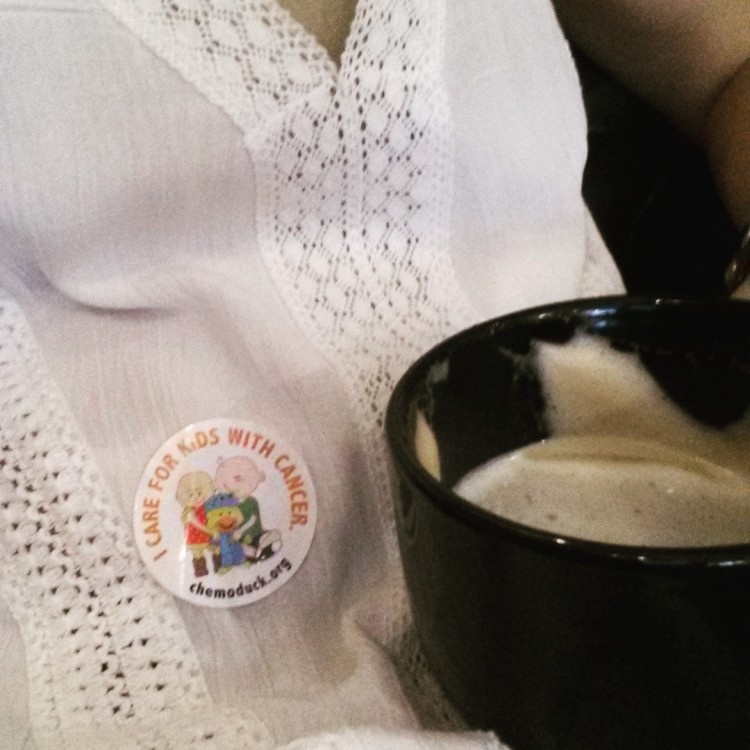 The sticker reads “I Care For Kids With Cancer.” We have a few of those laying around that somehow resurfaced after a good house cleaning this week.

She paused and looked at me with a curious smile, and in that moment I felt very driven to tell her my daughter was a cancer survivor. That should explain this sticker, I thought, since it seemed to warrant some sort of explanation. Clearly I caught her off guard. “Oh wow. May I ask what kind?” “Leukemia,” I said.

After brief conversation regarding her slight connection to the pediatric cancer world came a phrase that punched me in the stomach and nearly knocked me to my knees.

“This seems a little weird to say to a stranger but, you know… if you’re going to get cancer, leukemia is the one you really want to get. That’s the good kind.”

No. No it is not. There is no good cancer to get.

From the time Tessa’s doctors first uttered the word leukemia to us, I can assure you it was not at all what we had hoped for or wanted. There were no high fives or cheerful embraces. 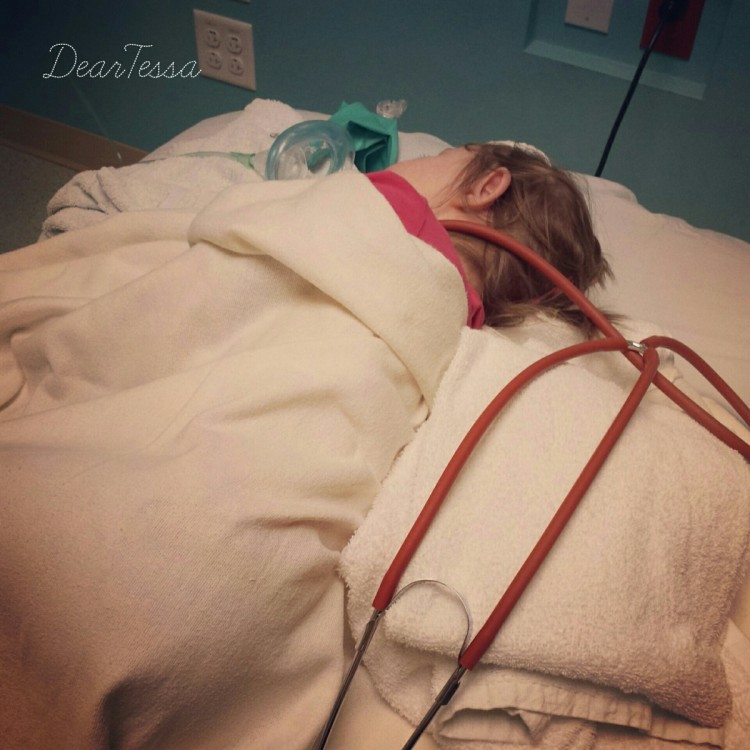 I stood there quietly with my eyes staring at her blankly, holding on tight to my tears. In what felt like ten minutes (but was realistically five seconds), I relived the horror of what leukemia did to my daughter and what it stole from my family.

Eight months of worry leading up to her diagnosis.

Six and a half grueling months of chemotherapy and hospitalizations.

Handfuls of hair laying on her pillow and on my lap — lord how the falling hair hurt me.

Trips to the hospital barber to shave the last few strands of hair from her beautiful head.

Tape stuck to and ripped from her body on a daily basis.

Well over ten bone marrow biopsies, and too many needle pricks and lab draws to keep track of at this point.

All of this and so much more at the tiny age of 2. 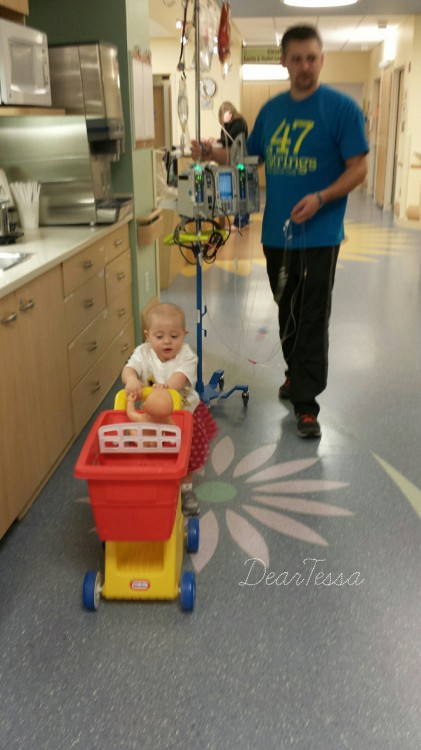 Certainly this woman wasn’t suggesting Tessa’s courageous fight against cancer was a breeze, was she? Because she believes leukemia is the “good” kind? No, she had to be referring to the survival rates… right? Just for the sake of that speculation, take a look at St. Jude’s statistics for AML survival rates here. It says the five-year survival rates range from 65 to 75 percent.

I hope these are not viewed as “good enough” statistics because, to me, they are not.

I collected my thoughts, recalling what I have learned from my therapist: we can’t do anything about what people say, but we can do something about how we react.

I took a deep breath and tried to think of an appropriate response. “Well, sort of. For the kind of leukemia my daughter had, and given the fact she also has Down syndrome, statistically there does tend to be higher survival rates for this situation,” I said, followed up with “But that isn’t always the case and, after all, those are just figures.” Here we go again with statistics and ratios and probability.

What the hell kind of answer was that, I thought to myself. Tell her she has no idea what your daughter went through. Tell her about the relapse scare. Tell her how rare Tessa’s case was. Tell her how about the fears — all of them. Tell her there is no way she understands that gut-wrenching pain. Tell her how much that just hurt you. Come on, just tell her!

But I couldn’t. Because I could see she believed she was coming from a good place, and I believed her intentions were from the heart even though her words cut me deep.

Just because Tessa survived does not mean her fight (and victory) is any less valid than someone else’s. It also does not mean anyone’s else’s fight who did or did not survive because of any kind of cancer is any less honorable either. And I can also tell you firsthand after living the cancer lifestyle, others I knew then with cancer weren’t envying someone else’s. Do you want to know why? Because every kind of cancer sucks.

Everyone is fighting to survive — no matter what kind of cancer they have.

The only victory lap I ever did because of leukemia was in honor of Tessa as she walked her first survivor’s lap at our family’s first Relay For Life event. 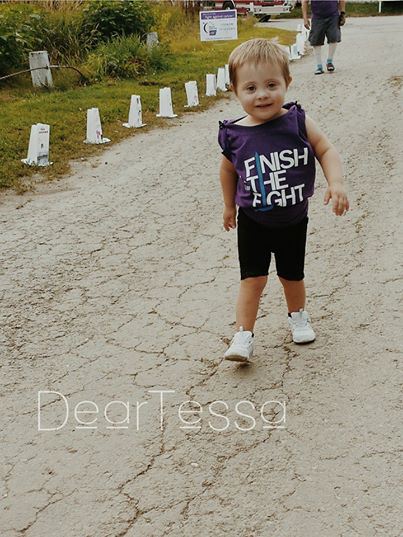 I left her with the woman with this. “She is 3 years old now and doing very well. She’s in full remission. Thank you.” She smiled and wished me well. Maybe I should have told her. Perhaps I could have shed some light on my viewpoint about cancer. But I didn’t, and I feel OK about it.

I took my latte back to the plush chair in the corner and reflected on what had just happened. Only a few tears this time. This is not the first time someone has made a remark about Tessa’s Down syndrome or her leukemia, well intended or not, that just hurt. I know it will be far from the last, too. These times are unpredictable. They appear out of nowhere and I am forced to confront words and phrases I would rather avoid.

I wore that sticker on my shirt intentionally after my coffee shop run-in for God only knows how long today. Somewhere throughout the day I lost it, but it didn’t leave my mind. Had I only known this sticker would have stirred up so many emotions in me today, I may have taken it off. But man am I glad I didn’t.

I do not care how old or young a person is. I am not interested in what specific kind of cancer someone has. All for one and one for all. I am throwing my fist up in solidarity to everyone facing this awful disease, in all of its forms. To the woman in the coffee shop and to people everywhere, please know this: There is no good cancer to get. Period. 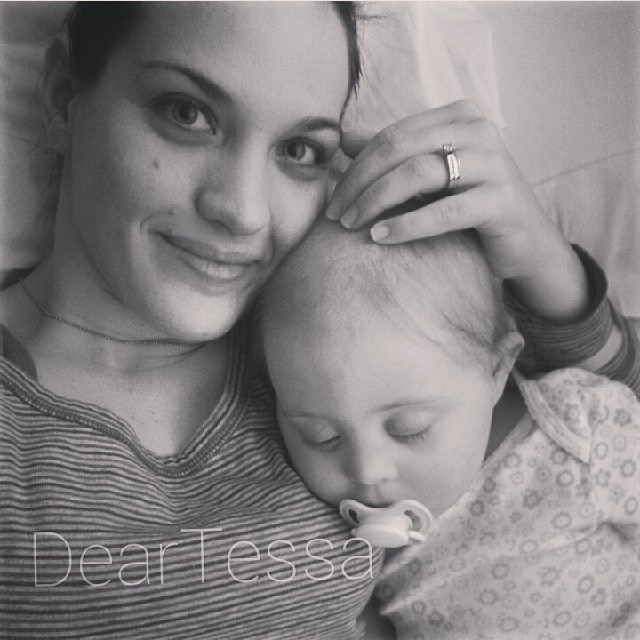 A version of this post originally appeared on Dear Tessa.

The Mighty, in partnership with Fuck Cancer, is asking the following: What do you wish you had found on Google when you were first diagnosed? Find out how to email us a story submission here.

Becky Carey is busy wife and mom of three: one preteen stepson and two toddler daughters. She is also an author of a children&#8217;s book. As the mom of a child with Down syndrome who happens to also be a cancer survivor, Becky shares her personal experiences about parenting through her blog, where she navigates life&#8217;s ever-changing directions.

becky-carey
Want more of The Mighty?
You can find even more stories on our Home page. There, you’ll also find thoughts and questions by our community.
Take Me Home