My Recent Rude Awakening About Mental Illness and Discrimination

I wouldn’t say I’ve ever really experienced discrimination due to my mental illnesses. I’m careful with whom I share my story, and while I know there are people with their own judgments, they typically don’t voice them to me. Considering my anxiety and depression are “high-functioning,” most people don’t even know unless I tell them. Like many, I’ve received negative and stigmatized responses, but for the most part, people have been open-minded and supportive of me.

While stigma around mental illness is still incredibly prevalent, I truly believe we are making progress. I can see how the conversation has spread, even in the short time I’ve been alive. My generation and the younger generations are spearheading this change and it’s been amazing to witness and be part of it. However, I recently had a rude awakening to the fact that many have yet to catch up to this change — at both individual and systematic levels. I realized we might not be as far ahead as I thought.

I got a call from my financial advisor the other day, giving me an update on my applications for life and disability insurance policies. My life insurance was approved; however, I was put on a two-year wait for a disability policy. My advisor gently told me this is common for anyone with any type of mental health concern. I didn’t let it show, but my heart sank to the bottom of my chest hearing that. How could a random stranger deem me a risk because of my mental health when they know absolutely nothing more about my experience with it than a diagnosis and name of an antidepressant?

I feared something like this would happen when I was filling out the application, but I brushed it aside, thinking, “I have to be honest, and besides, people are accepting and understanding now, I’m sure it’ll be fine.”

I opened the letter from the insurance company today, reading the words:

“After review of your application, we regret to inform you that we are unable to issue a policy to you because of the history of anxiety, depression, and an eating disorder.”

I started crying reading that. I’ve never received any letter that contained the words “we regret to inform you.” I wasn’t upset because I couldn’t obtain the policy, but the fact I was denied because of my mental illnesses… that was a feeling I’ve never experienced. 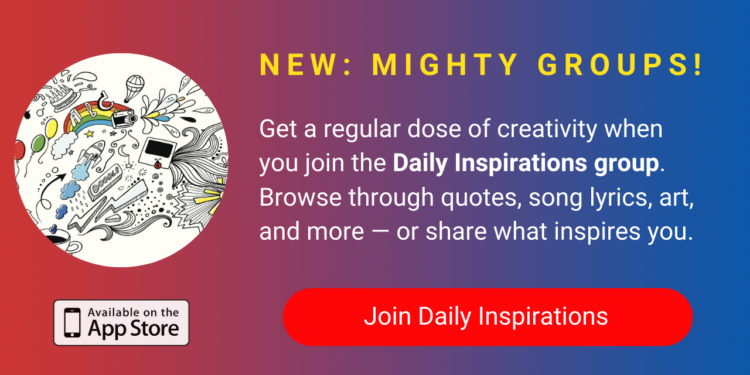 The letter went on to say they would review my application in another two years, taking into account my medical records during this time span. I hate to break it to them, but in two years, it’s very likely depression and anxiety are still going to be on that application. It’s likely something I’ll live with, to some extent, forever. I’m not going to stop taking antidepressants or stop going to therapy because someone who knows nothing about me is denying me an insurance policy — that’s ridiculous.

I just wish the rest of the world would catch up to this mindset. I wish this wasn’t a fight. I’m extremely fortunate I don’t need a disability insurance policy right now, but I think of people in similar situations to me who do need one right now, who may be denied because of their history with mental illness. These people shouldn’t have to fight companies and systems for someone to look at them as a person — not a diagnosis, not a threat, not a liability, not a risk — a person. Just like them.

Photo by Oleg Ivanov on Unsplash

Through multiple suicide attempts, living with depression, PTSD, and anxiety for over 10 years now, and having struggled with anorexia and bulimia-- I have a much closer relationship with mental illness than I'd like. But I believe in community and that we need each other. I believe in hope and that better days are ahead. I believe in the kindness of people. And I believe continuing to show up (for yourself and others) when everything is pointing the opposite way, is one of the bravest things a person can do.

sky_taylor
Want more of The Mighty?
You can find even more stories on our Home page. There, you’ll also find thoughts and questions by our community.
Take Me Home