Why I'm Sharing About Life With PCOS and Depression

I’m going to tell you all something I’ve never really talked openly about. Except once, two years ago in my polycystic ovary syndrome (PCOS) support group.

l used to hate myself.

I hated myself so much I didn’t want to live. So much so my mom had me hospitalized.

Why talk about it now?

Because it’s part of my story. A really dark part. I used to feel ashamed of it. I used to hide it away and try to forget it. And I do most days, except when people use mental illness as a snarky cut down of someone. It hurts looking back knowing now it wasn’t my fault. Mental illness runs in my family. Not that that is the only reason I was depressed. I wasn’t given the tools I needed to cope with my feelings before it got to that point. I was a ticking time bomb of instability labeled as a “moody teenager who didn’t like being chubby.” I felt like I was making things up because “girls with so much opportunity shouldn’t be so angry at the world,” but I wasn’t angry at the world. I wasn’t in control of my world. It was spinning and I wanted off.

Even after I was hospitalized and sent home, it wasn’t spoken of. I felt shame for something I couldn’t control. It took my aunt dying by suicide for the topic to even be discussed in my family.

I no longer feel depressed, yet I am aware of its triggers. I see a counselor regularly for my own well being. I treat my mental health just like I treat my physical health. I am not ashamed anymore. I learned that just like your body heals, so can your mind. Mental illness isn’t something that needs to be hidden in dark corners. It’s present in people you know in your everyday life. People you look up to. People you wouldn’t imagine.

It’s hard and scary and lonely.

Sixty percent of women with PCOS have at least one mental health concern, such as depression, anxiety, eating disorder, and are at greater risk for suicide. I urge you, if you are struggling – seek help. If you are facing mental health issues, share your story. It’s not shameful to be going through it. What’s shameful is making people feel like they are less than because of it.

Why is this so important to women with PCOS? Because we already struggle with symptoms and issues that mess with our self-image and feeling of being feminine. We are under diagnosed, mismanaged, and made to believe this is our own doing. We are told that we brought it on ourselves and we can just “lose weight,” just like that. But it’s not that simple. Neither is dealing with anxiety and depression, and being told to just “be happy.” It’s a vicious circle of being told we are the cause of our own issues because our own peers and society, the very people who are supposed to care for our health, don’t even understand us. How are we supposed to cope? 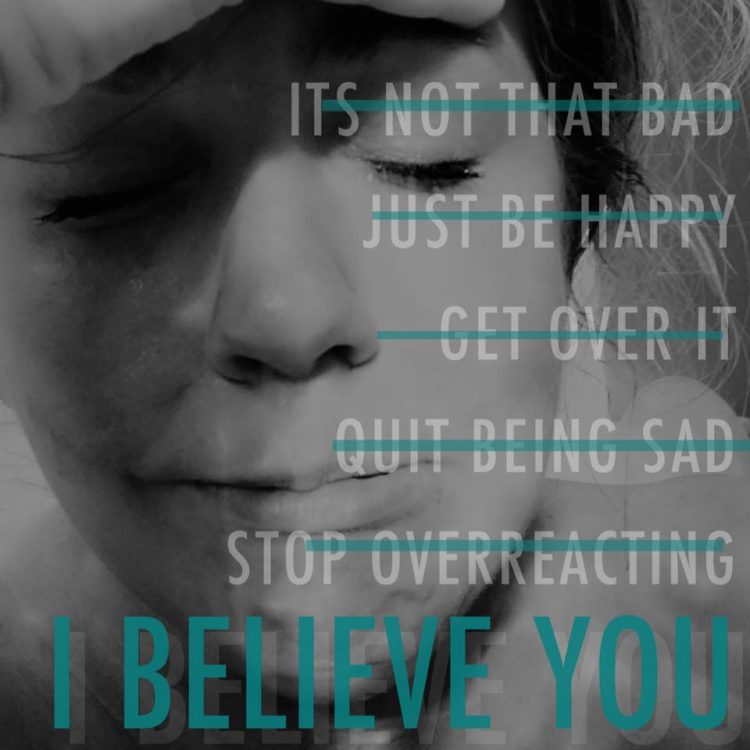 There is a very important reason I share the things I do. Not to warrant sympathy. Not to throw a pity party. But because two years ago, in the absolute depth of despair and feeling like I couldn’t ever deal with any of this, I decided to share my story online. And it was hard. And scary. And people judged. They still do, but you know what? One girl decided to share her story, too. Or reach out for help. Or start asking questions. And that lead to more women doing it… until just a little part of the PCOS community didn’t feel like they wanted to just disappear.

So yes, I may not be an educator. A researcher. A scholar. I won’t ever be rewarded for my perfection or praised for my shiny life. But I will keep making sure one more women knows she isn’t alone. She deserves better. She is worthy. She is not alone. You are not alone. You deserve better treatment, advocacy, understanding, and knowledge. But you have to speak up. You have to give to the people speaking up for you. Support those people. Every little bit helps.

Shelby is a mother of two living in the burbs of Atlanta, who spends her free time trying to get over her break up with carbs. ( I miss you, Pizza joe. Call me.) She does this while making it through the hours between coffee and wine, working within the PCOS community, advocating for self-love and acceptance despite her anxiety, depression and history of disordered eating, and fighting the good fight in her head between “ I wanna look good naked” and “ I eat cake in bed.” She blogs at www.survivingshelby.com and covers topics such as positive body image, PCOS, eating disorder recovery and humor. Really, just a woman trying to get her sh*t together.

pcossupportgirl
Want more of The Mighty?
You can find even more stories on our Home page. There, you’ll also find thoughts and questions by our community.
Take Me Home