13 Signs You Grew Up With PTSD

Kids often aren’t taught about trauma or mental illness in school. So if you grew up struggling with the impact of trauma or post-traumatic stress disorder, it may have been easy to feel like you were alone in the way you felt.

The unfortunate reality is that many kids experience trauma and can develop PTSD at a young age. Whether from sexual abuse, physical violence in the home, a car accident or something else entirely, traumatic events like these can leave a mark on a child’s mental health.

We wanted to know what “signs” people recognize now were actually due to childhood PTSD, so we turned to our Mighty community to share their experiences. No two people are alike, so it’s important to remember that no matter what your experience growing up was, you are not alone in your struggle. Read what our community shared below.

Did you grow up with PTSD? Let us know something you did because of PTSD growing up by clicking on the question below. 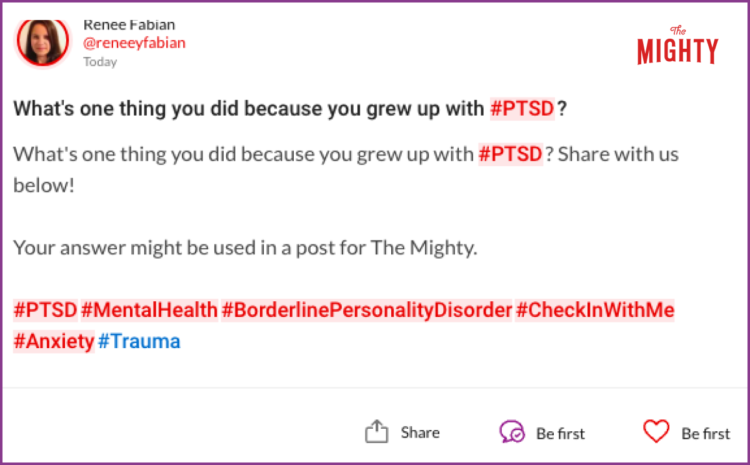 “I remember my teachers often saying that I was a ‘daydreamer.’ I now realize it was actually dissociation.” — Lulu B.

“Dissociate. Years of mentally leaving my body to avoid physical and mental trauma has left me with a disconnection from any kind of physical self.” — Mercedes P.

“I daydreamed all the time — it was my escape from what I was going through. In class, I played with my stationary rather than listen. My imagination was huge.” — Natasha R.

“Overshare; often at inappropriate times or around strangers. I’d say too much about my life experiences because I was so desperate to get them out of me.” — Kim A.

“I had a bad habit of talking very plainly about really messed up stuff while trying to make friends. People told me to be myself or talk about my life to make friends, but that’s horrible advice to give an abused kid.” — Rachel C.

“I would flinch at everything. A raise of the hand, a loud noise, a change in someone’s attitude, specific sounds and voices… I was in a constant panic all the time because everything scared me.” — Ashley M.

“I’m constantly flinching when people move around me, such as when they try and hug me or even put their hand up. All my life my mom would hit me, so as a result I’m so cautious and paranoid.” — Cyn R.

“Bite the school principal because he restrained me when I was having a panic attack and I got scared a freaked out trying to defend myself and get away.” — Jennifer C.

“I dissociated constantly, most of the time when someone was talking about something that had the potential to hurt me. It was an issue when I was in school, I was constantly pointed at as a ‘problem.’ I was ‘distracted’ and had a ‘lack of attention.’” — Zaraid B.

“The one no one really wants to talk about…. hypersexuality. I was sexually active fairly young and never really valued myself or what sex could mean. To me, sex had no emotional connotations and almost became a way of self-harming/destructing as I felt so empty.” — Kim A.

“I was full of rage. In a world where I was lost, alone and among adults who did not care about me, I grew to be angry and that anger, born from all the pain from my abusers, became rage. The rage became a barrier. A protector and a hinder. It held me back from so much and I had to fight so hard to control it. Eventually, I came to a ceasefire with my rage and it hid, deep inside of me, waiting, clawing at the bits for me to lose control. Rage is a symptom. Anger is a symptom. Both are emotions created out of numerous emotions. The flame of rage still sparks inside of me. A black flame that if released would either destroy or cure me. It was as if a part of me could watch with dry eyes as the world burned and another part of me would do anything to protect it. Fighting the rage was one of the most difficult things I have ever done and it took years. The rage is still sleeping, waiting for a trigger and I stay ever vigilant.” — Jess P.

“Held a lot of anger and resentment towards men who have done me no wrong. I just lumped all men into the ‘they are going to hurt you’ category. It’s utterly exhausting.” — Brianna P.

“I became withdrawn. I developed selective mutism and didn’t speak for two years. I couldn’t form relationships with people. I became disconnected. That was then. As I grew older I became aware of how the trauma was affecting my life. Only by knowing how it affects me and being cognizant and alert to those feelings was I able to have a somewhat ‘normal’ life. I am not cured of my PTSD, but I am ‘high-functioning’ and I have turned my ‘flaws’ into strengths. My hypervigilance is my safety net. My awareness protects me from danger.” — Melinda B.

“I always kept my room really messy with toys and books all over the floor so even if I fell asleep and didn’t hear footsteps approaching at first, my abusers would trip or step on something and wake me so I had a little warning. I always had to have books and toys and stuff near at hand. They were my warning/defense system, my comforters and my escape plan. I used to practice leaving trails of breadcrumbs (sometimes literal, sometimes in the form of my Kleenex or my brother’s legos), too, so maybe someone would be able to find me and rescue me the next time. It never worked, but I tried.” — Jessa L.

“I started tearing small parts of my clothes up here and there because I was asked what happened while it was being patched up. I couldn’t respond why only show the tear and cry.” — Tatauq M.

“Still do…. I check behind things and do ‘sweeps’ through the house to make sure all is well. This includes checking locks and such.” — Jennifer D.

11. Checking on Loved Ones to Make Sure They Are Still Alive

“Was always afraid of abandonment — I would call my parents daily at lunch when I was in school, just to make sure they hadn’t died. To this day, I get scared when my husband is gone/out too long and doesn’t call.” — Melody S.

“Having public panic attacks. Frequently. While in high school, a panic attack came on during a math class. I was rocking and crying and so confused with where I was. I would have flashbacks of my abusive past with my family and when I came to — I was bewildered of what just took place. This then just grew the panic due to the confusion.” — Kate K.

“It was more of something I didn’t do. For years I never expressed emotions or had any sense of empathy. Emotional withdrawal was a survival technique and made it difficult to connect with anyone. I’m still learning how to connect with people.” — James P.

If you grew up with PTSD or mental health struggles due to trauma, you’re not alone. There is support available to you. Check out the below stories from members of our #TraumaSurvivors community.