When I knocked on their doors in the late 80s, some medical providers listened to me, but most thought they knew everything they needed to know about postpartum depression and anxiety. They believed symptoms of perinatal distress landed on two ends of the spectrum. Either women had severe symptoms, were unable to care for their children, and were possibly at risk of harming themselves or their babies, or every new mother who presented with symptoms of overwhelming anxiety and tearfulness pretty much characterized our culture’s antiquated expectation that “all new mothers feel this way.” Very few health care providers took the time to learn that there was something deeper going on with new moms’ mental health.

Women who risked expressing their fears and vulnerabilities were often met with patronizing hyperboles, or in rare instances, they were shocked to discover that Child Services was called to protect their baby from the perils of misinterpreted maternal emotions. Afraid they would be misunderstood, overreacted to, or underreacted to, many new moms learned to stop telling their providers how they were really feeling.

So I listened. And I went back to knocking on doors. 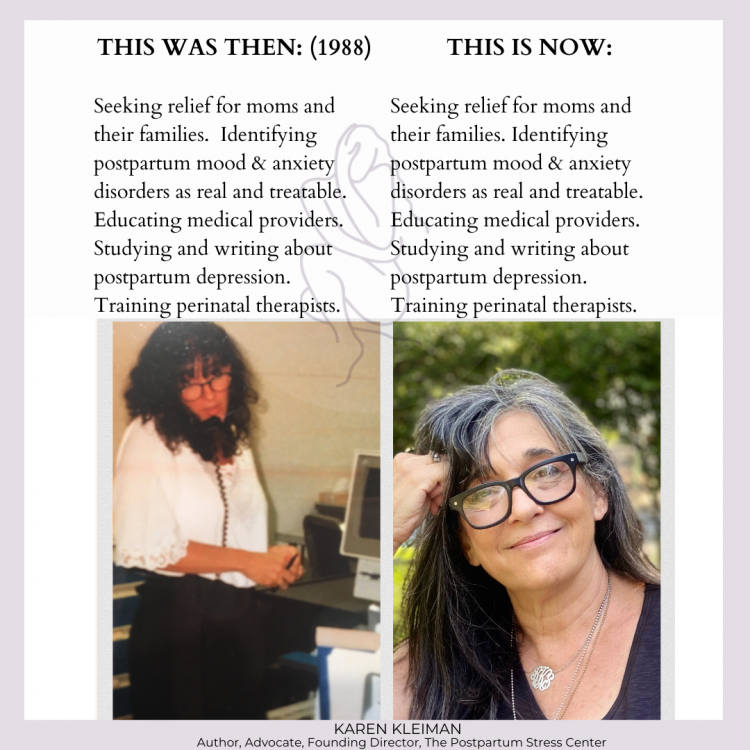 Today, more people are listening — but not enough. While there is momentum in the right direction, distress cries still go unnoticed and are often dismissed as par for the course for new motherhood. Perinatal distress pierces the hearts of new mothers, and until our culture takes this seriously, women and babies will continue to die. At least 1 out of every 7 women walking into OBGYN offices experiences clinical depression. This is not the blues, an adjustment disorder, or the transition to motherhood. We are talking about serious symptoms that meet diagnostic criteria for a mood or anxiety disorder.

You cannot tell a mother has a postpartum disorder by looking at her. You cannot assume if she looks “good” or says what you expect to hear that she is fine. If you do not ask the right questions, you have no idea if she is thinking of killing herself or not.

We cannot afford not to listen to new moms. And now more than ever, many new moms are incomprehensibly overworked, overtired, and near their breaking points. In today’s uncertain climate with unprecedented stressors and expectations, our mission to protect the mental health of new moms and dads is more imperative than ever. We must ask the hard questions. We must not judge. We must create a safe environment that enables new parents to trust us. We must listen. We must respond with concrete resources and support. After all, these parents are raising the children who are our future. They should not be doing that alone.

Karen Kleiman is an author, an advocate, and the Founding Director of The Postpartum Stress Center, LLC.

As an international thought leader, expert in the treatment of postpartum depression and anxiety, and author of several books on the subject, I am inspired to increase awareness and reduce stigma of perinatal distress and scary thoughts #speakthesecret