I've Got a Name, and It Isn't 'Schizophrenic'

There, I’ve underlined it for you.

Got that? Good. Now let me explain.

I’ve been called everything from “mad” to “mental.” Also “schizo,” “psycho,” “crazy,” “unstable,” “insane,” “touched,” “nuts,” “loony,” “unzipped”… oh, and once a professor called me a “liability” after I had a panic attack in class, going out of his way to tell me I couldn’t attend class if I was going to make the other students “unsafe.” A financial aid worker once demanded highly personal information be divulged if I wanted to go back to school, suggesting maybe I wasn’t stable enough to return and that she just wanted to make sure students were “safe.” And you know, I guess it’s the thought that counts; students deserve to be safe… but here’s the catch:

I’ve never once been a danger to other people.

In fact, once in an appointment with my therapist, I was asked to hit the table with a swimming noodle and I couldn’t do it without crying.

I smacked a table with a swimming noodle… and I cried.

But you don’t see that. You also don’t see the fact that I’ve been a vegetarian for 10 years now. Or that I can’t yell with getting upset, how I can’t fight with people, and how I don’t even kill insects, let alone anything else. Growing up I took in countless injured animals, and my mom hated it. As a freshman in high school I volunteered countless hours at the local animal shelter. A few years later I volunteered at a handful of soup kitchens. And just like you, I can’t watch those ASPCA advertisements, and I too sobbed during that Extra gum commercial.

But all you see is the diagnosis. So let’s get it out of your system right now, OK?

Are you good, are you done? Good, because you know what? I’ve done it again, I’ve gone out of my way to justify my sanity. And you know something? I don’t need to, not once and not ever. But I guess my caseworker had been right when she told me not to tell anyone about my diagnosis of schizophrenia. If fact, that was the first thing she said when she handed me the results of my psychological evaluation.

“Don’t give this information out,” she said. “Nobody needs to know.”

Now here I am almost six months later, and she’s still right. But only because of the tremendous stigma attached to my diagnosis.

And it’s for this exact reason I choose not to hide my diagnosis from anyone.

There will still be long nights lost to the emergency room and to hospitals. Much time will continue be lost at doctor’s offices, meeting with vocational rehabilitation and working with in home support. I’ll always take medication. Recently my psychiatrist changed my diagnosis to “schizoaffective,” which means I will always experience mood instability and anxiety along with psychotic symptoms. Years upon years will be spent being a full-time patient. And I am sure my mother will continue not to know how to check up on me, and my dad will still not be sure how exactly to bring it up in conversation. But that’s all OK; this is the life I was given. This was the hand I was dealt, the circumstances in which I was born, my journey, my story, my trail, my tribulation, etc. etc. Blah, blah, blah. “Every experience is a paradox in that it means to be absolute, and yet is relative; in that it somehow always goes beyond itself and yet never escapes itself,” blah, blah.

So did you get it? The point of the article? I’d hope so; you’ve taken the time to read this in it’s entirety. But just in case you’re not sure, here’s a general rule of thumb:

Call me by my name, not my diagnosis.

You know what? Just give me second… hold on…

I’ve got a name, and it isn’t Schizophrenic.

There, I’ve underlined it for you. 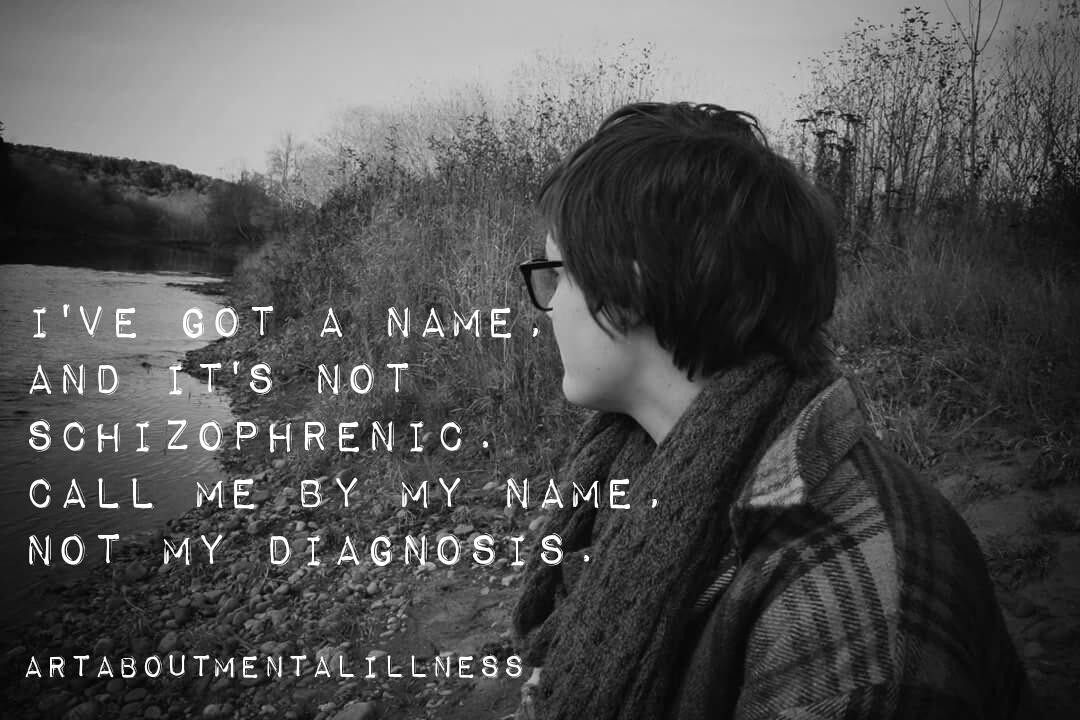 I am a 27-year-old published writer, blogger, artist, activist, and disabled individual looking to reduce the stigma surrounding mental illness, psychotic disorders, chronic pain, and disability as a whole. I have Schizoaffective Bipolar Type One and have co-occurring chronic pain diagnoses, migraines, and POTS. I am a senior at Husson University studying Public Health and Healthcare Administration. I’m an INFJ, a coffee lover, and a crazy cat lady. I’ve got a few piercings and two tattoos (and yes, one is an obligatory semicolon tat). One cat, a bunny, and one loving fiancé. We are residents of rural Maine.

syrena-clark
Want more of The Mighty?
You can find even more stories on our Home page. There, you’ll also find thoughts and questions by our community.
Take Me Home