People are not happy with makeup company Urban Decay after the brand posted an image to Twitter on Tuesday, which some are saying glamorizes self-harm. 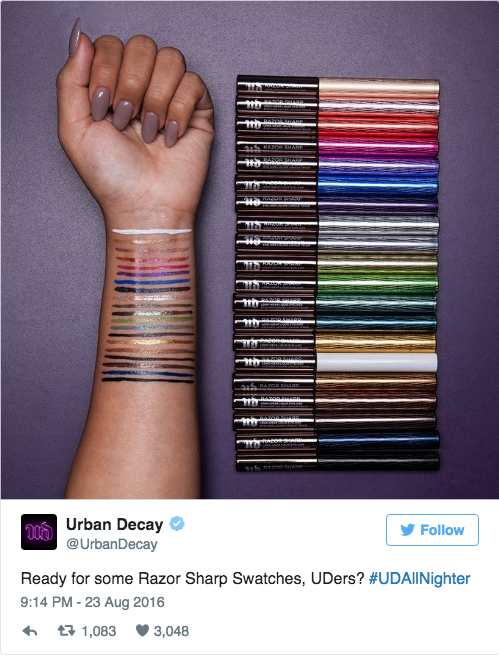 The image shows swatches of the makeup company’s “Razor Sharp” eyeshadow lined up on a models forearm. The photo is captioned “Ready for some Razor Sharp Swatches, UDers?”  The Tweet was removed Thursday afternoon, after people tweeted the company saying that the name of the eyeliners, “Razor Sharp,” paired with the imagery that resembles self-harm, is triggering to those who self-harm or are in recovery.

“UD seriously why did you have to draw comparisons to self harm?? It isn’t trendy or cool it ‘s a product of mental illness,” one person wrote.

@UrbanDecay UD seriously why did you have to draw comparisons to self harm?? It isn’t trendy or cool it ‘s a product of mental illness?

“As a person in recovery from self-harm, but also as someone who loves makeup, I can see both sides of the issue,” Alyse Ruriani, a contributor for The Mighty, said. “I don’t think that the average person, who has not dealt with self harm first or second-hand, would think anything of the ad. But when you have struggled with self harm, your mind is more sensitive to subtle references to it. I think it’s unfortunate marketing and that someone probably should have caught that the swatch placement combined with the name ‘Razor Sharp’ would indicate some reference to self harm.”

“I’m not offended. I just think it’s rather tasteless,” Margaret Assany, who also contributes to The Mighty, added. “I’ve got some pretty similar swatches on my wrist, and it definitely isn’t eyeliner. Their marketing team should be a little more sensitive to the issues that affect their consumer base and not act like it’s a no big deal.”

The company has since apologized, saying “We swatch on the inner arm to show texture & shades. We didn’t intend to reference self-harm as the product is named Razor Sharp Eyeliner.”

We swatch on the inner arm to show texture & shades. We didn’t intend to reference self-harm as the product is named Razor Sharp Eyeliner.

Do you think Urban Decay’s tweet was inappropriate? Let us know in the comments below.

If you or someone you know needs help, visit our suicide prevention resources page. If you struggle with thoughts of self-harm, here are some resources that might help: To Write Love On Her Arms and Self-Injury Outreach and Support.