How I Healed After My Suicide Attempt

There is not enough space to talk about suicide in our society. Not only are suicidal feelings stigmatized, but suicide attempts and life after an attempt rarely get a voice.

In April 2012, I attempted suicide. I was living in San Francisco and had started therapy. I had been very near that point for a long time, but a combination of starting therapy and watching/feeling a lifetime of trauma surface and fly around me, and then having a horrendous phone call with my mum — which tipped me over the edge completely — is what led me to attempt.

What followed was a seemingly endless maze of chaos, confusion and despair, but also deep, deep, healing. It’s been a rocky, rugged, lonely and long road, but one that has left me unable to hide from my shit anymore. During my life before my attempt, I had a world of trauma beneath the surface that I wasn’t “dealing with.” I didn’t know how… I was scared and didn’t feel able to let myself step back from responsibilities I had had all my life, and collapse. Which is what I needed to do, and what I did after my attempt.

I finally had the breakdown everyone told me I needed.

For the first couple of years following my attempt, I spent so much time on Google, desperately searching for a map and instructions of where to go and how to live my life after my attempt — how to get through it, how to survive what I was experiencing inside and outside…

I felt like I couldn’t breathe. I was totally overwhelmed with what was happening inside of me — my inner world felt all-consuming and was all-consuming for a while. All I could do was head inwards and hold on. It was so incredibly lonely and totally unfamiliar.

The outside world felt terrifying, too. I felt terrifying. For ages after my attempt, I noticed how my attempt stripped me of any self-trust, and the last five years has been about building that up again.

“The two most powerful words when we’re in struggle: me too.” — Brene Brown

For the five years since my suicide attempt, I’ve written and drawn cartoons almost every day. In my journal, on my blog, for online magazines and printed projects. I don’t know where I would be without this creative practice, that describes and expresses what spoken words cannot. I also don’t know where I would be without the online community that have continued to read and respond to my work. Finding so many people saying, “me too,” in response to my articles and cartoons is so, so, healing.

Last year I started the project Living With Suicide. I have gathered stories from people who have attempted suicide and/or live with suicidal feelings and thoughts, and put them into a zine/small book. It’s a stunning collection of photographs, poems, written stories, illustrations and links to other resources. It offers a space for people to know they are not alone, as well as offer insight into what it is like through an attempt or to live with suicidal thoughts/feelings. 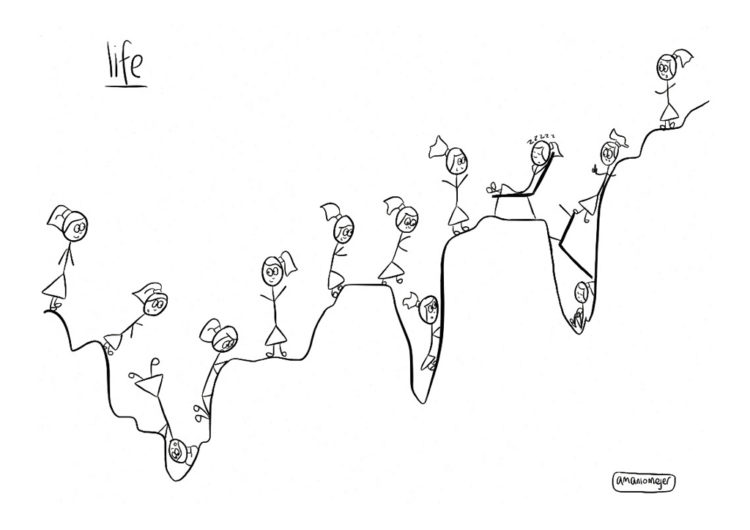 You can order your copy here.

Amani can be found enjoying herbalism, surfing, napping, laughing, swimming in rivers, talking about life with friends and anyone who will listen. She is a firm believer in telling your story in order to heal and has never had a bad hair day in her life. Connect with her on Facebook or take a look at her website.

amani-omejer
Want more of The Mighty?
You can find even more stories on our Home page. There, you’ll also find thoughts and questions by our community.
Take Me Home