It was 8:34 a.m. on a Saturday morning when I found out my dad had killed himself. My dad. The dad who had taught me how to drive a stick shift last spring. The dad who always called me in the middle of the day just to say “hi” and remind me that I was the “best daughter ever.” He was the  person who had the same heart as me and used words in the same way I did and felt the world in the same way I do. He was gone. He really wanted to leave. He was hurting. He didn’t say goodbye.

I was 17. It was October. I was wearing a grey crew neck sweatshirt with my high school’s mascot printed on it. I had been out late the night before at our school’s rivalry football game. I was graduating in five months. I didn’t know where I wanted to go to college and I didn’t know what I wanted my life to look like and I was scared of not being enough.

I was 17 on October 2, 2010 and I became an adult on October 2, 2010. My mother’s tears splattered down on my sweatshirt. I held her in my arms. My tears splattered down too. We wailed. I pounded my fists into my pink bedspread and then into my walls. I tore through his closet for answers and pressed my nose into his old tennis shoes to fight for just one more smell of who he had been. At the morgue I asked to see his body. I held his hand and kissed his fingernails one by one. They were short and bitten, just like mine. They were evidence of our hearts that were sometimes too big. I was sobbing and then I wasn’t. My own voice surprised me when it finally came, quiet and sure. I told him that I was going to fight to make beauty in the face of this tragedy. I promised him that I would live a beautiful life for him, and that I would help other people live beautiful lives too. I got up and walked away from him and held my head high as I found life again; not the same life, but a new life.

Grief is a funny thing. It’s hard and then it isn’t and then it is again. It breaks you down but then cradles you as you learn how to build yourself back up. It teaches you resilience and you learn how breathtakingly beautiful survival is. Grief informs how spectacular the beating of your heart is. Grief gives you a filter to understand other humans and who they are and why they are. Grief was the best thing that ever happened to me.

Grief showed me vulnerability which held my hand as I applied to art school. It rubbed my back as I learned to paint and sew and write and create things that I needed to create to survive. When I doubted myself late at night, curled in my dorm bunk bed, it held me and recited three words to remind me why I kept showing up, bitten nails covered in paint, day after day — “to make beauty,” it whispered, “to make beauty.”

My dad found beauty in words and writing and language. I found beauty in these things too. Grief showed me the human condition, vulnerability showed me my heart and my dad had showed me how to use my words. The worst day of my life had given me the tools to create the best version of living. I learned that even the worst days of your life have purpose too.

I started writing. I found salvation in affirmations; statements that build you up when you have nothing. Statements that uncover inherent human truths. Statements that had showed me things that empowered me to save myself, giving me the ability to love others. I wanted to write them and share them. Communication is what holds the human race together, I wanted to make beauty out of it.

On July 22, 2019 I got into my car. I was 26. I was wearing a pink tank top and a colorful headband. It was early, the sun was still rising. I accelerated onto the interstate by my house and rolled down my window. I drove for a few minutes, rounded a corner, and then looked to the left. A pink billboard with four sentences stared back at me. “You are human. You are lovable. You are strong. You are enough.” 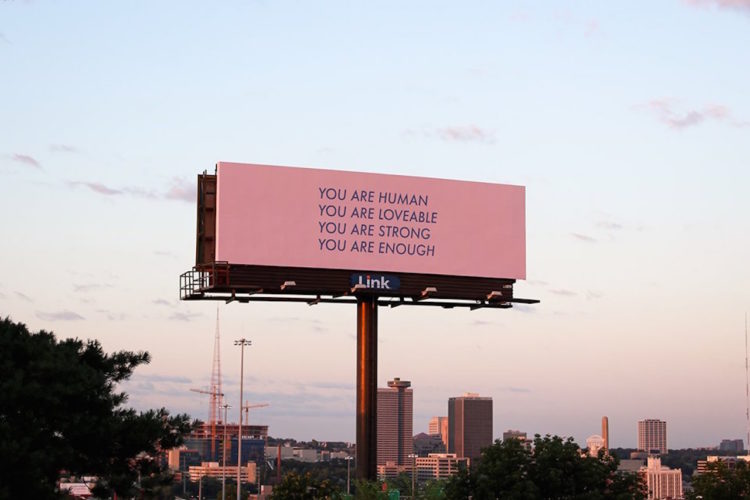 I was 26. It had been nine years since I lost my dad. My heart was still beating, my lungs were still breathing and I was still alive despite all the things that had been hard. I looked at the billboard. Those were my words on the billboard. Those were the words that grief and vulnerability and nail biting and spray painting and communicating and surviving had taught me. I smiled. I had made beauty, and I hoped other people would feel it too.

Nicole Leth is an artist, writer, and yoga teacher living and working in Kansas City, Missouri. She opened a chain of brick + mortar clothing stores when she was 18 to get back at an ex- boyfriend, learned about success, and then moved on to a better definition of success. She is 26 now and is learning about life, softness, and about what it means to be a human being. She strives to create beauty in the face of hardship, create environments that evoke joy, and write words that support emotional growth. She now owns and creates visual and written content under the lifestyle brand SOFT with a HQ in the arts district of Kansas City and she’s just happy to be alive.

nicoleleth
Want more of The Mighty?
You can find even more stories on our Home page. There, you’ll also find thoughts and questions by our community.
Take Me Home