My tears mimicked the summer rain gliding down the windshield of my new (used) car. I tried to control my heavy breaths and turned the key with my right hand, while my left hand loosely held a cell phone at my ear.

Five rings… six rings… I almost hung up, I almost gave up.

Then, a voice. Over the buzzing in the background, she asked me politely how she could help me. Yes, help.

I wondered if I sounded strange to her. Did I sound afraid? Or weak? Or dangerous? In that moment, I was all of these things, but she told me: “we look forward to seeing you in about a half hour!”

I had somewhere to be. I had a purpose.

The highway ramp curved tightly, with a patch of tall trees residing just beyond the guard rails. The weight of my sadness felt like gravity trying to pull me off the road.

But, I had somewhere to be.

I crossed state lines wishing my demons weren’t allowed to follow. At the second red light, I was nearly swallowed by the poisonous thoughts telling me to return home. To go back to my original plan. The delicate, depression-filled balloon inside my head had burst, and its toxic contents were seeping into every corner of my mind.

I traveled one final block as the GPS said, “You have arrived at your destination.” The words hung over me, dripping with irony. I had reached a completely different destination than the one I planned to take myself to that day. I felt the slightest flicker of power, and maybe even some hope.

I opened my car door, realizing as I stepped out into a puddle that in the midst of running from myself, I forgot to change out of my fuzzy slippers. Oh well.

I crossed the street without minding my mother’s words about how many times to look both ways. Being in survival mode narrowed my vision, allowing me only to see the sign indicating I had reached safety. The word “tattoo” flickered before me, not unlike my will to exist.

As he retraced one final line on my right wrist, I realized how much peace I had found in the consistent vibrations of the tattoo needle. Consistency, predictability — things I desperately craved.

“Warrior, huh?” The artist awaited an explanation. “Yes,” I replied softly, “But the ‘I’ is a semicolon. Because I really wanted to stop going today. But I’m still here.”

I saw him try to mask the shadow of concern that was given away by his facial expression. He extended a hand: “Don’t give up, Warrior.” 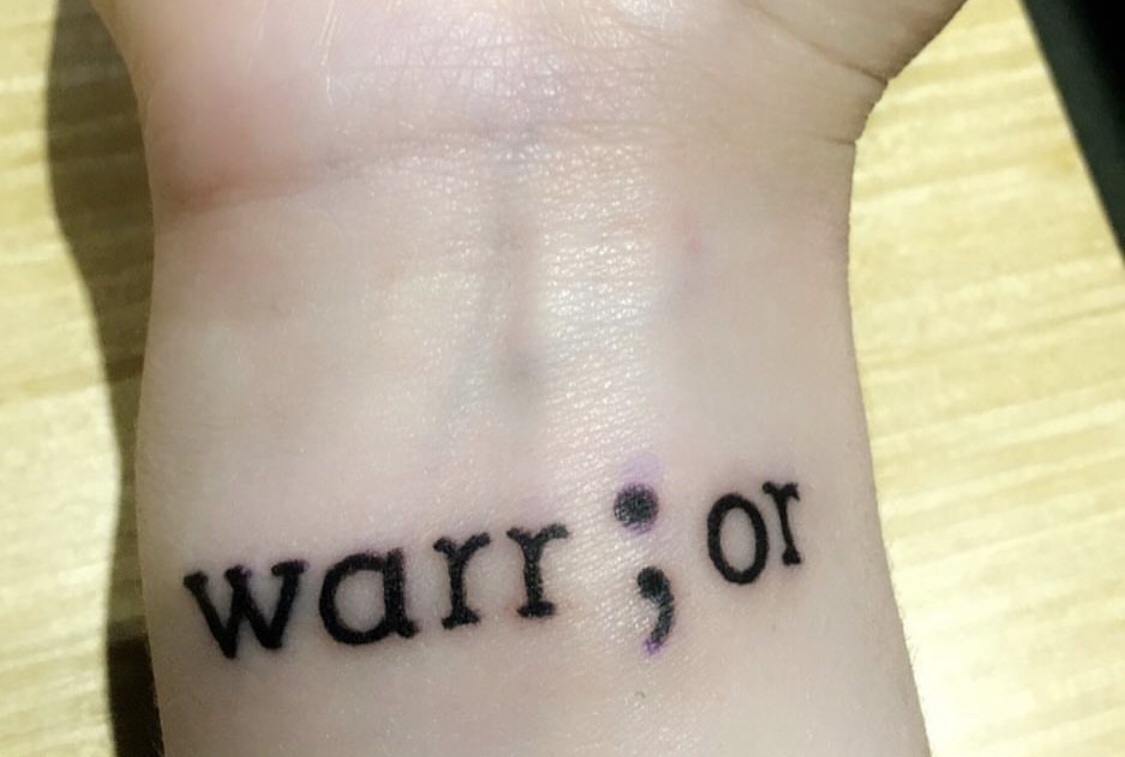 Download our app to connect with other mental health warriors and support one another. No matter what, you’re never alone.

Hi, my name is Abby! I am a 24 year old college student studying to be a social worker. I’ve been struggling with anxiety and depression since a very young age. In recent years I have begun doing a lot of advocacy work in hopes of helping other people who struggle with anxiety and depression to feel less alone. I found that speaking and writing about my mental health is really therapeutic for me and I hope to be able to share my experiences in order to help break down the stigma surrounding mental illness.

abbysmargon
Want more of The Mighty?
You can find even more stories on our Home page. There, you’ll also find thoughts and questions by our community.
Take Me Home