In April of 2017, my younger brother and only sibling, Alex, lost his life to suicide. Suicide has so many negative associations, which often increase the stigma. Yesterday I saw a picture on Facebook that had inspirational signs posted in a front yard. One said, “your mistakes do not define you.” I read this over and over to myself. This statement really resonated with me. Suicide does not define someone. My brother was a lot of things, but here is what he was not:

My brother is not a criminal. He did not commit a crime, so please stop saying that he “committed suicide.” Many suicide survivors would prefer that you say, “died by suicide” or “lost their life to suicide.” Even though I choose to say my brother lost his life to suicide, that does not mean it holds any ground on who my brother was as a person.  My brother doesn’t deserve to be remembered this way and neither does your loved one.

There is a stigma around suicide that people who lose their life to suicide are cowards or they could not cope with life. That is a completely unfair analysis. You will never know the internal struggles of another human being and it’s probably pointless to try. I actually think my brother was very brave. If you’ve been depressed before, you may know how truly debilitating depression can be. Depression can make you feel hopeless, or like things will never get better. Depression is painful — both physically and mentally. My brother fought the good fight, and he is not a coward. My brother was a First Lieutenant in the Army National Guard and he was brave. Anyone who makes a choice to fight for their country should be honored. End of story.

3. He is not unintelligent.

My brother graduated from a well-respected university, was a biochemist, a 4.0 student and a human encyclopedia of interesting facts. If he didn’t know the answer to something he would figure it out. In high school, being the naturally curious man that he was, he decided to read the “Book of Mormon” not once, but twice, because he had a close friend that was of Mormon faith and was simply interested in learning more. He had no intention of converting religions, he was just a very curious person who was always learning. My brother was smarter than most people I know and will probably ever meet. He was working, making strides as a leader in the military, and had the world at his fingertips. Just because he made one choice does not mean he wasn’t
absolutely brilliant. We all make mistakes.

4. He is not unmotivated.

My brother was very physically active. He prided himself on staying healthy and in shape. He worked out every day and sometimes twice a day. He did his best to eat a healthy diet, and was always researching the best work out supplements and exercise routines. Nothing stopped him from going to the gym. Even when it was snowing you could see him out in the driveway digging out his truck so he could get his kickboxing workout done. This is a young man who graduated college while juggling duties of a fraternity and the Army. He was everything but unmotivated.

My brother was a young man with an old soul. He knew no stranger. Alex was everyone’s friend. He always greeted you with a smile and his signature cheeky wink. He was jovial and always knew how to have a good time. He was there when you needed him and you could always depend on him. His jokes could keep a room of people roaring for hours. His hugs could take your breath away. They were warm, strong and sincere. When Alex died, a young woman reached out to our family to tell a story about how she moved in her pre-teen years to his middle school and was terrified to be the “new girl.” It was Alex that greeted her and treated her like an old friend. He made her feel special, and less alone. This was the kind of person he was. Alex was kind, loving, charming and handsome. This is how I will remember him.

6. He is not an introvert or unsocial person.

In fact, he was quite the opposite. Alex was popular all throughout school. My brother enjoyed being around people and people loved being around him. His personality was infectious and people were naturally drawn to him. This was evident by the 1,000+ people that attended his funeral. Yes, one thousand human beings came to pay their respects to my brother. There was, of course, our family, as well as individuals from not only from our hometown and around the country. There were military brothers, his fraternity members and hundreds of his friends. Let me tell you, he deserved it.

Suicide does not discriminate. It affects all races, social groups and economic groups. So before you spread negative associations about suicide, please stop and think about all of the beautiful things your loved one did. Because their “mistakes” do not and will not define them as a person. Not today, not ever. 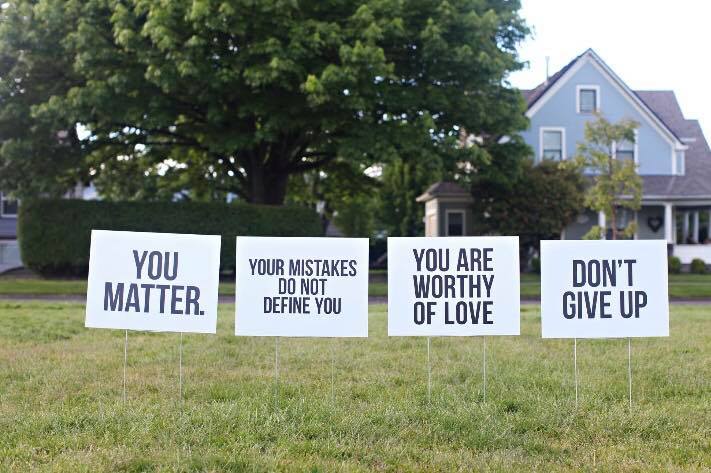 Hello, I'm Chelsey and I have been battling with anxiety and depression since I was a teenager. I am a survivor, a giver, and most important of all I am a proud mother to a tenacious blue eyed toddler named Chancellor. In April of 2017 I lost my younger brother and only sibling Alex to suicide. Since my brothers death I have been doing everything in my power to raise awareness about mental health. I have been raising money for the American Foundation for Suicide Prevention and even started my very first blog titled Me Minus Alex. Through my acts of love for my brother I can feel my heart beginning to heal. My wish is to bring more awareness about suicide, end the stigma, and give back to other survivors in need.

chelsey-anthony
Want more of The Mighty?
You can find even more stories on our Home page. There, you’ll also find thoughts and questions by our community.
Take Me Home