Why April Shouldn't Be the Only Month to Talk About Testicles

April is Testicular Cancer Awareness Month. Prior to being diagnosed I had no idea there was a specific month for a cancer that solely affects my sex.

Testicular cancer is under-discussed. Perhaps it’s an issue of visibility since testicles are usually concealed (unless you’re on some beaches in France).

I’ve been running a testicular cancer awareness blog called A Ballsy Sense of Tumor (ABSOT), with the explicit goal of changing the attitudes and beliefs of society towards talking about men’s health. However, I’m just one person with a blog and still feel like society has a long way to go before testicular cancer is as acceptable to discuss as I’d like it to be.

I have hope though, especially when I look at another cancer that is generally thought of as gender-specific — breast cancer. It wasn’t easy for breast cancer activists to raise the level of awareness the disease has today.

As recently as the 1950s the New York Times refused to print articles containing the word “breasts.” In the 1970s, Shirley Temple Black and First Lady Betty Ford publicly announced their diagnoses, which helped bring widespread attention and acceptance to this cancer. Nowadays dozens of female celebrities speak out about their personal battles, NFL teams wear pink to bring more attention to the disease, and many other companies and highly-visible corporations make a point to contribute to the discussion around breast cancer.

When it comes to testicular cancer, if you ask anyone to name a celebrity with a TC diagnosis, they will most likely respond with Lance Armstrong (who then went on to have some other troubles). Not the best “face” of the disease. But recently I’ve read stories of more and more athletes, celebrities, and even a YouTube personality who are sharing their testicular cancer battles.

A step in the right direction.

I want to live in a world where we can freely talk about testicular self-exams. I want conversation to be open about all health issues, but I’m especially passionate about men’s health. Not talking about it can be a potentially life-threatening mistake. (For some ways to bring up testicles in everyday conversation, check out my post here.)

I’ve already written about how men are hesitant to go to the doctor. I know I was. Even making a phone call to a medical professional seemed to such an arduous task, although in all likelihood it saved my life.

The other day I saw a friend whom I hadn’t seen since before my diagnosis. After exchanging pleasantries he asked me how I was doing and said he was thinking a lot about how I had testicular cancer. He said he didn’t even know what to look for. I took this as an opportunity to give him a quick rundown on how to do a self-check and recommended he do them at least once a month.

Despite my willingness to discuss this on my blog I still felt a little strange talking about it verbally with another guy. I wish I didn’t, but I also want to be honest about the limitations that surround having open conversations about testicular cancer. While we were talking about it I don’t think the word “testicle” or “ball” or any of the other variations was used.

I want to change this dialogue, both for myself and for everyone else. I want it to be deemed as OK and not weird to talk about testicles under medical circumstances. I know this starts with me. Confronting my own discomfort will help me start to have more honest conversations.

But I know I am only a small part of what needs to be a widespread change.

How can we as a society overcome the stigma surrounding testicular cancer? Having months like April designated as “Awareness Months” is helpful, but awareness can’t be something that only happens for one month out of the year. I found a lump in October and was diagnosed in November. April is a long way off from those months.

Like me, the average guy doesn’t know about the importance of regular self-checks until it’s too late, and I know this is sad truth is because people don’t want to talk about their testicles.

Testicular cancer is highly treatable, especially in its early stages, but it does no good if men simply aren’t aware of their own risk. We can’t let these conversations about testicular health — no matter how awkward they might be — get brushed aside because society feels uncomfortable discussing testicles.

My goal with ABSOT is and always will be to bring awareness to this disease and to discuss it openly with the hopes it inspires others to do the same. I recently joined the Testicular Cancer Awareness Foundation Ambassadors Program to help continue working towards this goal.

I don’t have all the answers, but I know testicular cancer awareness and open discussions about men’s health is a mission that needs to be important to all people. Simply put: testicular cancer does affect everyone, not just men. It affects anyone who has a father, a brother, a husband, a son or a male friend.

Here’s my challenge to you: Share this blog (whether it’s this post or the whole site) with two males who are important to you and encourage them to do the same. We need to get more information into the hands of the men whose lives can be saved by having more frank discussions about this topic. 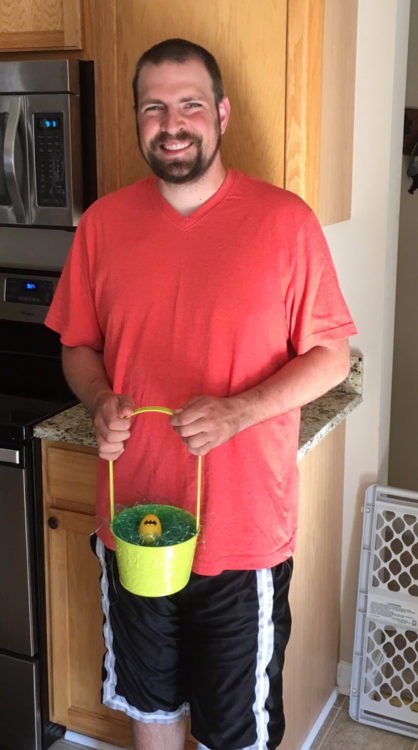 Will you help me get the ball rolling and shed some light where the sun don’t shine?